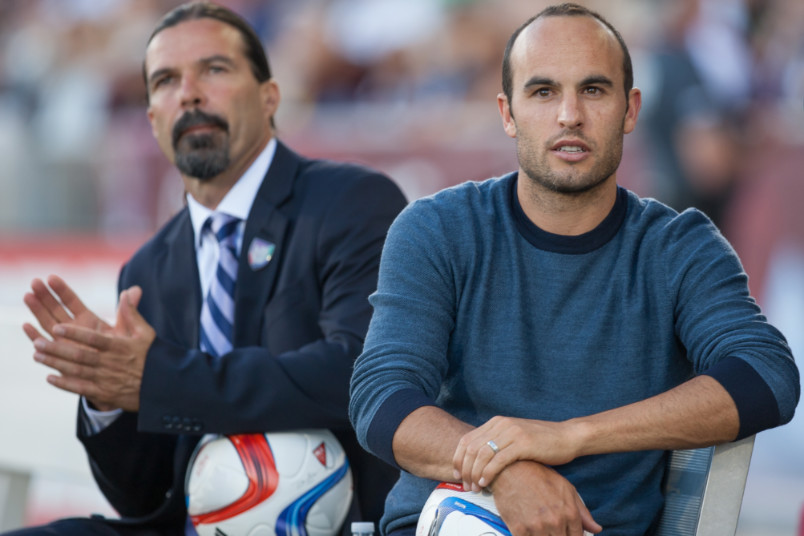 By Clemente Lisi – NEW YORK, NY (Apr 20, 2020) US Soccer Players – MLS has seen its fair share of great players over the last 25 years. The league has featured loads of American talent as well as foreign stars from the very start. The first player the league ever signed was USMNT midfielder Tab Ramos, an indicator of what they had in mind for the new US topflight.

The USMNT players who took MLS offers for the league’s debut season were pioneers. They started the path for other American players to forgo lucrative contracts in Europe to help grow the budding league. Eventually, a pattern emerged of elite American MLS players looking for European opportunities. The exceptions are some of the best players in league history. Landon Donovan and Taylor Twellman started their careers with Bundesliga reserve teams, moving to MLS and establishing themselves as stars.

Deciding the 11 best American players in league history isn’t easy. That’s a testament to the great talent that has played in MLS over the past 25 seasons. Who are the best 11 players from the United States to play in MLS? The first caveat is finishing their careers, so no current players on this list. The other is multiple seasons in the league. A swansong, no matter how successful, isn’t enough for this list. With that in place and working with that All-Star tradition of loading up on offense, here’s a starting XI in a 4-3-1-2.

A two-time MLS Cup winner, Hartman played 17 seasons in MLS with a record 37,260 minutes in goal. He won Goalkeeper of the Year in 1999. Nicknamed “El Gato” because of his quick reflexes, Hartman still has more saves than any goalkeeper in league history.

Known for being a hard-nosed defender, Agoos won a record five MLS titles on his way to Hall of Fame induction in 2009. He also won the 1996 US Open Cup and the 2001 MLS Defender of the Year. Agoos was one of those Americans who left Europe in the mid-90s to help grow MLS.

Balboa was one of those players who helped re-ignite the growth of the game in this country. He played in MLS for seven seasons, the bulk of it with the Colorado Rapids. Known for his toughness and tenacity, Balboa was always fun to watch and would go on to serve as a mentor to many others entering the league.

Pope was part of that early DC United dynasty, winning three MLS Cups. His overtime goal to win the league’s first MLS Cup remains one of the biggest moments in league history. Pope came out of college just in time to become the 2nd-pick in the first MLS college draft. He spent his entire career in the league.

Vermes had played in Hungary and the Netherlands as a forward before moving to MLS for the MetroStars, Colorado Rapids, and the Kansas City Wizards. He was the type of player who hustled for every ball, pressed opponents when needed, and wasn’t shy about helping the midfield whenever his side had possession. Vermes was a part of the Wizards side that captured MLS Cup in 2000 and won Defender of the Year.

Harkes returned to MLS in time for the league’s inaugural season as a proven club player. At DC United, Harkes captained the team that won the 1996 and ’97 MLS Cup titles. His elegance in midfield, ability to distribute the ball, and even occasionally find the back of the net made him a highly valuable asset.

Mastroeni, also a defensive midfielder like Harkes, captained the Colorado Rapids to an MLS Cup in 2010. An aggressive tackler, Mastroeni was gritty in the midfield and a leader on and off the field. His pressing game was also among the best in league history.

Olsen spent his entire MLS career with DC United, winning two MLS Cups before eventually taking over as coach. His understanding of the game was a rarity among his generation of players, always seeming to get to the right place. Olsen was a gamer in the classic sense, devoted to his club in a way normally reserved for teams with decades of tradition. It was Olsen helping build that at DC United and setting an example across the league.

The playmaker role could go to no other than Landon Donovan, who can lay claim to being the best American-born player in league history. The league’s MVP award is named after Donovan, who is currently second on the all-time scorers list with 145 goals in 340 games. A versatile striker, Donovan was a wonderful reader of the game. He could score as easily as provide assists. Donovan, the league MVP in 2003 and 2011, also won six MLS Cups.

Third in goals on the all-time list, Cunningham showed for multiple teams that he knew how to score in MLS. For him, it was simple. Speed and trusting that he knew how opposing defenses would play him. Cunningham’s pragmatic tactical awareness worked more often than not, earning him the ire of opposing coaches. Bonus points for using his goal total as his jersey number.

The other striker any team would want is Dempsey, who could play as either a winger or attacking midfielder depending on the formation. Starting as a member of the New England Revolution, Dempsey reset expectations for American players. His return to MLS with Seattle was a major event that paid off. In all, he played nine seasons in MLS, scoring 72 goals in 186 games.

Arena is the only MLS coach to be part of two dynasties with DC United in the late 1990s and the Los Angeles Galaxy in the mid-2010s. Arena has five MLS Cups and three Coach of the Year wins.

This bench represents a cross-section of eras. Nick Rimando, in goal, is known for both his skill and longevity after playing for 17 years. He holds records for career wins, shutouts, saves and appearances. Tony Meola joins him, backstopping the 2000 MLS Cup winning Kansas City Wizards and winning the MVP award.

Chad Marshall won MLS Cup three times and Defender of the Year in 2008, 2009, and 2014. Remember what we said about bulk of career spent in MLS? That doesn’t hold for Bocanegra, but he won back-to-back Defender of the Year awards with the Fire in 2002 and 2003. That launched his career in Europe but he had already put together a remarkable early run in MLS. The same caveat would apply to his Chicago teammate DaMarcus Beasley, again using a stellar early showing in MLS to move to Europe at a time when that wasn’t the norm.

Brad Davis and Steve Ralston provide the same thing to this squad, assists. Ralston is 2nd and Davis is 3rd on the all-time list. Both spent their careers in the league with Davis playing 392 games to Ralston’s 378. Cobi Jones also pushes the attack while setting up the forwards.

Speaking of that attack, Preki and Razov represent the best the league had to offer in the early 2000s. Preki, a former indoor soccer star, won MLS Cup in 2000 with the Wizards and captured the MVP award in 1997 and 2003. Creative and dynamic, he was fun to watch. Razov, meanwhile, brought his own offensive pizzazz to the Chicago Fire to help them win the title in 1998. The first player in league history to score 100 goals, Razov is sixth all-time on the league’s scoring charts, scoring 114 times in 262 games. McBride’s first run in MLS made him a star in Columbus before showing that his game worked just as well in England. Twellman joins them, part of the Revs squads that finished runner-up three years in a row and the MVP in 2005.