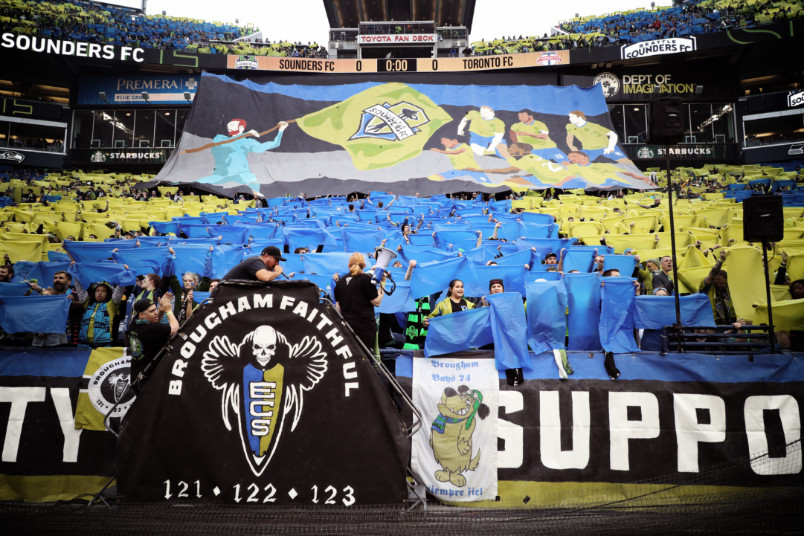 In Major League Soccer, that return figures to be led by supporters groups. Organized support is a hallmark of American soccer these days, thanks in large part to the emergence of a few leading groups and the pivot of the league towards promoting its most ardent fans.

MLS recognized that the family-friendly model wasn’t going to make for a good TV product. Fully embracing supporters culture carried significant risks. The alternative was a Disney-fied existence that relegated the league to an afterthought among both American sports fans and the broader global soccer community.

The American soccer tendency to copy what we see abroad fed at least some fear that the new world version of Old World supporters groups would trend in the direction of politics and possibly even violence. The history of groups in the stands of soccer matches around the world entrenched the connection between organized soccer fans and chaos.

Most of those fears were unfounded in North American pro soccer. The groups forced the league to recognize the value in supporting and exploiting the burgeoning supporter culture. Tifo, chanting, and singing makes for good marketing. MLS matches across the country are vibrant, energy-packed environments. The league made sure to celebrate that fact. The quality of play on the field and the star power of its players are perhaps the most important elements of MLS’s future success, but sometime around a decade ago, the league woke up to the power of its fans as a selling point.

That doesn’t mean MLS has a simple, happy relationship with the organized fan groups. By its very nature, MLS pushes to control every aspect of its business. Fans are no exception. The line between consumer and participant blurs in the world of sports. That leads to semi-regular conflicts between those in charge at the league and club level and the paying fans. Look no further than the league’s choice to use images of supporters lighting flares in the stands to sell MLS even while banning that very practice for an example of the strange relationship.

Last year’s fight over the Iron Front flag is another case in point. A highly politicized national atmosphere prompted the league to crack down on the display of a flag with anti-fascist symbolism. Though the Iron Front flag had been a presence in the supporter sections of MLS stadiums in the Pacific Northwest for a few years, recent events brought it to the fore of the public discussion.

To put it kindly, MLS fumbled its response. In a bid to avoid stepping on any toes, the league only alienated large swaths of its most committed fans. Whether a professional sport can be apolitical is an open question. MLS’s heavy-handed crackdown, which included deputizing individual clubs and damaging their reputations in the process, only exacerbated the problem.

There is one way to look at it. By making a mountain out of the Iron Front flag molehill, MLS fell victim to that most modern of internet phenomenon, The Streisand Effect. The Streisand Effect is the mistake of attempting to censor or manipulate information or messaging, only to see it grow significantly in reach. The Iron Front fight not only made news in soccer circles in the United States, but it also exploded into a globally discussed story.

Not the best look for a league that trumpets its progressive outlook and promotes inclusivity. Banning fans from displaying a flag meant to represent the fight against fascist (read: racist, nationalist, exclusionary) elements in the country will never appear reasonable.

The Iron Front flag controversy represents the league’s current-day relationship with its supporters in microcosm. MLS wants all of the passion and atmosphere supporters bring to its stadiums without any of the complications that come with real human beings. Flags, tifo, pyrotechnics. Controlling those things, or attempting to censor certain expression along fluid, self-serving lines, is nearly impossible.

MLS teams have the right to respond to clear instances of racism, homophobia, and violence. Anything else that falls under the heading of “expression” is bound to be problematic.

There’s no better evidence of how poorly the league’s decision went over than how quickly it backtracked. Clubs that burned goodwill with their supporter groups by toeing the league’s line apologized. The delicate unspoken agreement that exists between club and fan, where fans overlook business models as long as clubs treat them as something more than just customers, cracked.

MLS did eventually open a dialog with the fans to facilitate a resolution. It’s worth asking how much damage they’d already done. MLS will need the supporters and their collective power when soccer resumes, whenever it resumes. In the meantime, there is still a tricky relationship with hard feelings leftover from last year’s travails that will inform how that goes.

On Thursday, amid the league’s discussions over how to proceed both during and after suspension of play, Seattle’s Emerald City Supporters issued a statement advocating for the league to remain paused until such a time that fans can attend games.

“We, the Emerald City Supporters, believe that football without fans is nothing and call for the continued suspension of the MLS season until matches can be played in a manner that is safe for players, team personnel, and fans,” the statement read. ESC’s public stance comes a week after MLS commissioner Don Garber floated the idea of neutral, closed-door games for MLS, perhaps as a second preseason ahead of the league’s full relaunch.

Those ideas are naturally anathema to groups whose very existence centers on the gameday experience. Of course, even an MLS supporters group isn’t a monolith. Following the ECS tweet publicizing its statement, members took to their accounts to push back. For plenty of soccer fans getting the game back in any form is paramount. Principled stands about the role of fans can come later.