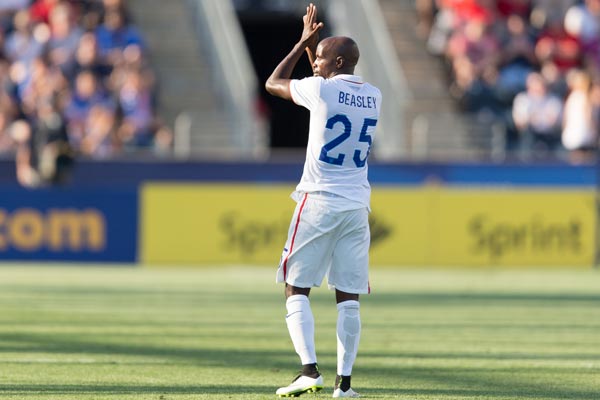 By Jason Davis – WASHINGTON, DC (May 20, 2020) US Soccer Players – Most soccer cultures take their older generations for granted. The deeper the history of the game in a given place, the greater the number of former players who influenced the sport in their post-playing lives. The matriculation of retired players into positions that impact the game in the places they come from is so natural as to be unremarkable. Of course, players who age beyond the field of play choose to bring their love for the sport to bear on the sidelines as coaches, in the boardroom as executives, or on television as pundits. Where else would they go?

The knowledge that prior generations pass down is just one part of the benefit to the culture. The presence of greats in the community can serve as a focal point. Simply put, there’s someone around to provide context for the present.

The list of Americans with strong playing resumes now coaching at various levels is growing. Eric Wynalda and Landon Donovan hold jobs in the country’s second division and are putting their personal stamps on new, but ambitious, organizations in major markets. Tab Ramos joined the ranks of MLS head coaches after years leading the youth programs of US Soccer.

MLS has former league players in a further 13 positions, eight of them Americans. Only Ben Olsen matched Ramos’s feat of making a World Cup team. While the league has turned to its former player ranks for coaching leadership often, the best of America’s recent generations is missing from the sideline.

There are a few former American greats in the executive ranks worth mentioning, people who choose to take on a less hands-on role as they brought their weight to bear on the game in the United States. Carlos Bocanegra helped build a championship team in short order in Atlanta as the technical director and Claudio Reyna is in his second chief soccer officer job as sporting director with expansion franchise Austin FC.

During his time in New York with NYCFC, Reyna had a direct hand in the growth of the sport in his home region. The northern New Jersey native dominated high school soccer in the area. He went on to play for the University of Virginia and professional in a host of countries. Reyna’s presence with NYCFC gave the club direct ties to soccer royalty from the New York City metropolitan area.

There aren’t many other former USMNT greats working in their hometowns. Club ties and opportunity usually trump any dream of working in the game where players came from. Even for those that want to, the structures in place rarely present the chance.

DaMarcus Beasley is an undisputed American soccer great. It’s not just the length of his career. Beasley played on four World Cup teams and might have made a fifth if the USMNT had qualified for Russia. It’s the level at which he played. Beasley manned two different positions over 20 years and was good enough at both to have his name written in ink on the USMNT team sheet.

Beasley also carved a path for himself in Europe at a time when such a thing was notoriously difficult for Americans. He played in the Champions League when Americans didn’t feature in that competition. He eventually made his way to Mexico and thrived in a league notoriously devoid of Americans without Mexican heritage.

Following Bealey’s retirement as a player after the 2019 season, he could have chosen any of the traditional paths for soccer greats. Respect for Beasley’s intelligence and understanding of the sport might have landed him an assistant coaching job, or an opportunity to join an MLS front office. Though he never showed any particular interest in going on television, it’s not difficult to imagine Beasley providing his insight on any one of the national broadcast platforms that have invested in the game. Who better to relate the reality of the Champions League to an American audience than an American who reached the semifinals of that tournament while playing for PSV?

Instead, Beasley is going a different route. There are American soccer legends involved in soccer ownership groups. Landon Donovan is part owner of San Diego Loyal, the club he also coaches. Tim Howard has an interest in Memphis 901 where he also serves as sporting director and planned on playing this season. Those players claim those respective cities as their adopted hometowns.

Beasley is going back to his roots. Per Jeff Carlisle of ESPN, the Fort Wayne, Indiana native is hard at work planning a USL League One club for the city he grew up in. While Fort Wayne can claim DaMarcus and his brother Jamar as products of its soccer scene, it probably wouldn’t be among the leading candidates for a professional soccer franchise without Beasley’s leadership.

Fort Wayne is a city of 250,000 halfway between Chicago and Cleveland known mostly for its manufacturing industry and being the first home of the NBA franchise now known as the Detroit Pistons. Like so many places in America, soccer is growing but not central to the culture. That’s what makes Beasley’s move so fascinating. Exactly because Fort Wayne is a rust belt city in the sphere of major cities but far enough away to have a distinct identity, professional soccer at a lower division level feels like a perfect fit.

Not everyone is in Beasley’s shoes. So many American greats came up in the shadow of major cities. There, building something like a League One team would be difficult or unnecessary. Names like Wynalda, Donovan, Reyna, Howard, and Ramos learned the game in soccer hotbeds that already have one or more pro soccer teams. They can’t impact their hometowns the way Beasley can.

Not every player makes a move as audacious as the one Beasley is attempting. Not every country affords a former player the opportunity. In the United States, very few playing greats come from places that are ripe for something like a brand new soccer franchise.

Beasley played in four World Cups. He made the Champions League semifinal. He navigated six dramatically different leagues. Former teammates, pundits, and fans alike recognize him as one of the best players ever produced by the United States has a lot to offer. Good news for Fort Wayne. DaMarcus Beasley is coming home.