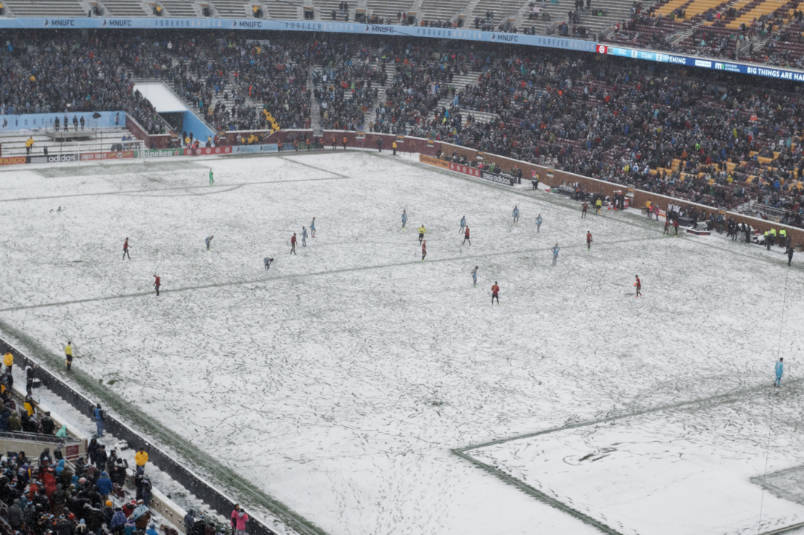 By Jason Davis – WASHINGTON, DC (May 6, 2020) US Soccer Players – At this moment, with the world neck-deep in the Coronavirus pandemic, it’s difficult to predict how the global health crisis will impact professional soccer. Those things we took for granted are now under threat thanks to the outbreak. Leagues and clubs around the planet ponder difficult decisions about their immediate future.

No major professional soccer league is yet back on the field, and the process for returning is proving difficult and protracted. Massive amounts of testing. Sequestering players and staff in isolated environments. Games behind closed doors. Even playing shortened matches to mitigate the effects of lost fitness and schedule congestion. It’s all on the table.

The soccer-loving world anxiously awaits the return of “top-level” games—while acknowledging that whatever form it takes won’t be close to “normal.”

Whatever happens with the return of soccer, in Germany, England, Spain, and beyond, it’s sure to have a domino effect on the soccer calendar of the future. Countries like the Netherlands and France have already abandoned their current seasons and are looking forward to the next.

Looming in the distance is the 2022 World Cup in Qatar. That might not be a pressing concern now. Still, the longer the stoppage in play continues increases the backlog of games that need playing. With that in mind, the World Cup in just about 30 months becomes a problem.

The odd placement of that World Cup in November and December of 2022 buys some time for international soccer to hold the necessary qualifiers to fill out the 32-team field for the tournament. There’s a rising concern that FIFA’s calendar will need adjustment for 2021 if the pandemic shutdown wipes out windows set aside for qualifiers in 2020. The five extra months available thanks to the consideration made for Qatar’s temperature might be crucial.

Before the pandemic, the winter World Cup was a much-discussed problem for competitions across Europe. With some exceptions, European leagues typically run from August to May. If things stay the same following the resumption of play, the next World Cup will fall just a few months after the start of the 2022-23 season.

In anticipation of the stoppage, the English Premier League started planning late last year. The tentative schedule proposal called for games just nine days ahead of the launch of the World Cup, with league matches resuming eight days after the final.

To call that imperfect would be an understatement. The clash of club and international soccer throws into relief the battle between top leagues and FIFA. Clubs pay the lion’s share of player salaries and would be happy to see a dramatic reduction in international play. FIFA leans on the World Cup for almost all of its revenue and is in a constant quest to expand its centerpiece event. Two figures from opposite sides of that divide see a similar solution to the issues created by the pandemic shutdown and the winter World Cup. A switch in the calendar for European leagues.

Olympique Lyonnais president Jean-Michel Aulas presented the idea of starting the next French season in the early months of 2021 as a pragmatic one. That was before French authorities made the decision that precluded a return to play for Ligue 1 and prompted the competition to end its season prematurely. Aulas imagined a scenario in which French football would complete the 2019-20 season in September before beginning the next campaign in 2021.

“I have fears we will not be able to resume the season,” Aulas told L’Equipe. “And that is why we should perhaps study another scenario that [Nice president] Jean-Pierre Rivere and Nasser [Al-Khelaifi, Paris Saint-Germain president] spoke about, where we would shift the end of the 2019-20 season to the end of the calendar year and we would resume the new season at the start of 2021.”

A move to that schedule would line up the French league to conclude just in time for the World Cup in 2022. No need for creative scheduling or concerns over players returning to the league season fatigued or injured after a month in Qatar.

Concacaf president Victor Montagliani also sees the pandemic and 2022 World Cup schedule as a reason to consider the calendar switch.

“We have the opportunity because the World Cup in Qatar in 2022 will be played in November/December and that could be the idea,” Montagliani told Radio Sportiva of Italy. “Here in the Americas, the season is already played according to the calendar year, perhaps it is a solution that could also be used in Europe and Africa, it is a possibility to be discussed at national and continental level. It is not an idea to be discarded, it can be a solution in view of the next two years and this winter World Cup,”

Montagliani’s North American perspective looks like a distinct bias, but neither he nor Aulas are the first to suggest the idea. The seasonal rhythms of soccer in Europe are deeply ingrained, but winter weather is regularly a problem for leagues, especially in the northern reaches of the continent. Germany’s annual winter break helps to lessen the impact of frigid temperatures from the Bundesliga down the ladder of German football, but the pause is an imperfect solution to the problem.

A regular debate in American soccer circles revolves around the professional soccer calendar in the United States and Canada. The problems with aligning to the current European schedule are obvious. Weather is chief among them, but there’s also competing with American football for attention. However, the possible benefits keep the idea in vogue.

Europe’s transfer windows drive the bulk of player movement across the globe. Syncing MLS to the European calendar would facilitate player movement, both into and out of the League. Logic suggests the more players would be willing to jump to MLS and their clubs more willing to sell between seasons.

The same should be true for MLS-based players looking to move to Europe. MLS teams often hold on to their most desirable players simply because it would be difficult to replace in the middle of the season when European clubs are on the hunt for new talent.

Even if a European calendar swap isn’t permanent or universal across all leagues, it could change the relationship between MLS and the international player market. No one quite knows what kind of depressive impact the pandemic shutdown will have on player movement, but if MLS can weather the storm it might be in a position to benefit dramatically.

Everything remains on the table. League, clubs, and FIFA continue to discuss the best way forward with little clarity weeks into the shutdown. All things are possible, even a switch of the calendar for Europe’s top leagues.

The thoughts of Aulas and Montagliani can’t help but smack of irony to American soccer fans after years of debating the calendar here. It probably won’t be a surprise for many, then, that the opposite has been suggested by more than a few people as well: Maybe MLS should switch to the current European calendar, given recent events.

What a scenario. MLS playing on Europe’s old calendar, while Europe moves to the calendar year schedule abandoned by MLS. That might be more irony than we can handle.