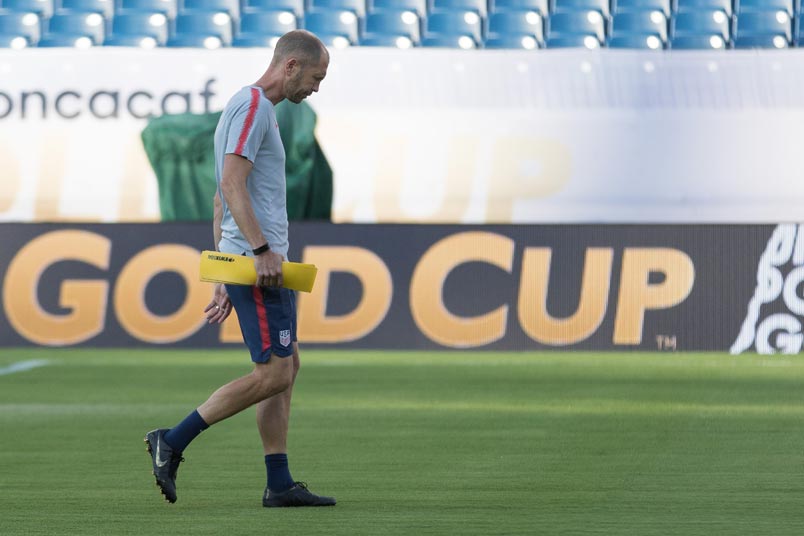 By Charles Boehm – WASHINGTON, DC (May 22, 2020) US Soccer Players – In early June, Gregg Berhalter’s tenure in charge of the USMNT will pass the 18-month mark. In a world without COVID-19 and the disruptions it’s unleashed, he and his team would be set to gather for a camp to prepare for the Concacaf Nations League semifinals and final. Those games were on the schedule for June 4 and 7 in Texas.

With most club leagues still sidelined and doubts swirling about the timing of any sort of return to international play, it remains uncertain when the USMNT will get back on the field. Last month Concacaf chief Victor Montagliani admitted that his confederation’s planned slate of 2020 games, including the opening of 2022 World Cup qualifying, might have to be pushed off to next year. However the cards may fall in the days to come, it seems likely that future games will end up filling smaller periods of time.

“We’re going to be on the tail end of things resuming,” Berhalter said to Jim Rome in a radio interview earlier this spring. “They’ll first start the leagues up again and then we’ll have to adjust our schedule based on that, and right now it’s TBD.”

So this might be a good time to take stock of where things stand. Berhalter’s overall record is 12-5-2, 8-2 in full competitive matches. That only tells part of the story, though. Performances and personnel have varied. Only two of those 19 games took place outside the United States. The coaching staff has not hesitated to use matches for experimental or educational purposes, particularly the humbling friendly losses to Jamaica, Venezuela, and Mexico.

Based on what he’s said publicly, that’s all prelude to the games that really matter.

Berhalter is a methodical coach with very specific ideas of how to play, and this is his first job at the international level. So it’s hard to gauge both how far along Berhalter’s process is, and how far along it should be. The Gold Cup and the now-suspended Nations League are the only competitive games so far. March’s cancelled European friendlies against the Netherlands and Wales were important opportunities lost.

His team’s buildup play has been fluid at some moments, ponderous at others. In many camps, he’s introduced complicated ideas with the intensity of college students cramming for finals. That’s led to varying outcomes on gameday. The only real foreign test, the Nations League visit to Canada, ended in a frustrating 2-0 loss. It is noteworthy that the question of identity has come up repeatedly in recent weeks.

Star midfielder Weston McKennie offered a different interpretation of the concept, extolling the unity and spirit of “the collective group” instead. Berhalter himself addressed the matter in a conversation with Fox’s Alexi Lalas, Stu Holden, and Rob Stone.

“I’m watching it and first I’m like, ‘what the heck is Zack talking about? Of course we have an identity. The guys know exactly how we want to play the game.’ And then I started thinking, wait, he’s exactly right,” Berhalter said. “The first thing is, it’s a young group of guys establishing themselves on the international stage … The second thing is, we haven’t had an event to form our identity. … You’re defined by your year of the World Cup, the ’94 group, the 2002 group, the 2010 group – that’s how the public forms opinions on the team. We haven’t had this opportunity because we’re a young group. And we’ll get that opportunity and the guys will work really hard in qualifying, and then eventually in the World Cup, to form what we feel can be a really strong group moving forward.”

The perception and management of time has been a hot topic around the USMNT for quite a while now. How much of it was lost in the final months of the Jurgen Klinsmann era? What about in the year-plus gap between Bruce Arena’s resignation and the belated installation of Berhalter? That turned out to be a strange gap year that Steffen considers time wasted. Has the current boss done the absolute most with the precious windows he’s been given so far?

These debates take on an extra dimension as world events compress the 2022 qualifying cycle further with each passing day. The margins for error are always a stressful subject during the Concacaf gauntlet. That could be hyper-intensified with tougher travel turnarounds, rule changes allowing extra substitutions, and a likely need for roster depth and a variety of contributors. With fewer warmup matches, the unknown unknowns can loom menacingly.

There’s also a prominent known unknown. How and at what point will Berhalter’s famous philosophical preferences give way to pragmatism to get the essential jobs done? This applies to call-up choices as well as tactics. He says that’s not a concern, and adds that veteran USMNTers “will continue to have a place with us when they remain fit and they’re in form” despite the overall youth movement.

“We were able to execute our playing style, by and large, in the 20 games that I’ve coached. If you look at the data, all the passing numbers are up, all that stuff is in a decent spot,” he told the Fox crew. “But to me, what’s pivoted in my mind, is that it’s more about qualifying for the World Cup and doing well at the World Cup. That’s what’s most important. So, will there be alterations to this philosophy to get results in games? 100 percent, absolutely, because that’s what we need to do, and we understand that. But along the way, we keep chipping away, we keep teaching our principles and we will be able to play our game in most of the games we’re in.”

Has Berhalter shown enough to calm the fretting of fans? Is this meticulous planner truly ready to navigate the unexpected that Concacaf loves to throw up? For now, it’s in the eye of the beholder. We might not get much chance to deepen our perspectives until the crucial games are back on the schedule.