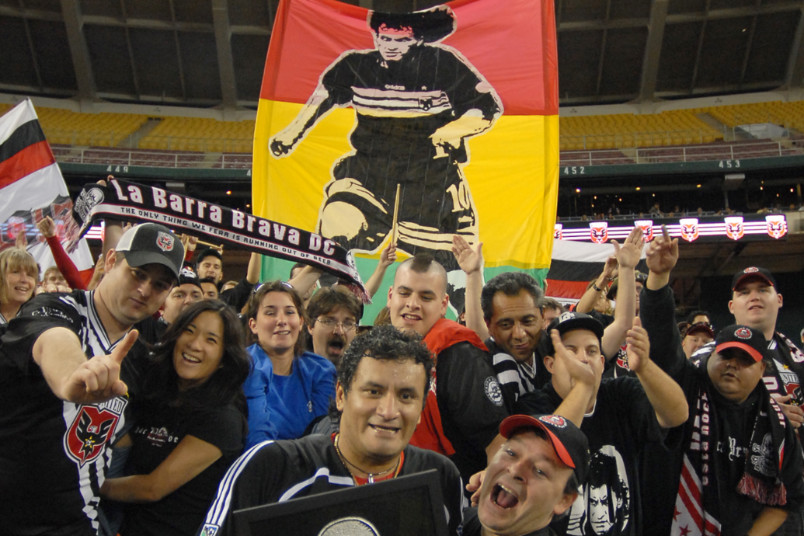 By Jason Davis – WASHINGTON, DC (May 1, 2020) US Soccer Players – First, not every club can have legends. Sure, over a long enough timeline every team can elevate a player or a handful of players to exalted status for achievements actual or imagined. That doesn’t make them legends. Getting loose with that term only serves to diminish players who deserve the status.

Second, true legends hardly need to be chosen. Instead, they choose themselves. Whether it’s through longevity, or production, or coming up big in big moments, we don’t usually have to think too hard about the names that belong on a list of legends.

Most of the time, we ignore both of those truisms. Every club wants legends to call its own and will force the issue if need be.

Is yours a trophyless club, more likely to finish out of contention than make a run for a title? Then your legends might be the mediocre-but-affable fan favorite, the hero of a cup match against a hated rival, or the try-hard underdog who just kept sticking around.

Major League Soccer is a tricky place for club legends. No team in the league has more than 25 years of continuous history. That’s enough time to establish a few legends depending on the club’s relative level of success, but it limits the number of potential candidates. For clubs like DC United and the LA Galaxy, picking out a few names for a proverbial Mount Rushmore isn’t difficult. For other clubs, it’s nearly impossible.

Those clubs who joined the MLS party after the league’s initial startup period face a trickier scenario. There are exceptions to the rule that naming legends is tougher if you don’t have the full history to the league to lean on. The Sounders, to name one. However, a significant percentage of MLS clubs haven’t been around long enough to write history with legends in it. There’s no consensus on how many seasons a club has to have before they can start calling players legends, but running out of fingers to count on is a good first step.

MLS is also in a near-constant state of character shift. Picking out the different eras of Major League Soccer and making a coherent picture to compare players fairly is like making sense of a Jackson Pollack painting. It’s possible, but the effort hardly seems worth it.

A short existence combined with continuous flux pulls apart the threads that let us lift up legends. How does Mauricio Cienfuegos compare to Robbie Keane? Is Stern John a Crew legend when he A) played just two seasons in Columbus in the early days of MLS and B) didn’t win anything while he was there?

Comparing players across eras is probably unnecessary. Cienfuegos’s accomplishments aren’t canceled out by Keane’s, even if the league Keane played in was of a higher caliber. There’s some magic in that. Fans who remember those Galaxy teams are prone to overrating its most important figures, for no other reason than nostalgia.

Longevity is another ingredient in the recipe for MLS legends. Soccer is a game played by transients. The nature of the sport means players very rarely stay in one place for any considerable length of time. Those that do last because they’re good enough for the club to want to keep them around. That also means they’re probably good enough to have interest from elsewhere. That makes the relationship fragile, even when the player is beloved and happy.

Turnover has always been a part of MLS. As the league matures and its financial clout expands, the churn of players at the top end of the talent spectrum will increase. The league is rife with recent examples of incredibly influential players who came-and-went without a few seasons.

Miguel Almiron is just one example. He helped Atlanta United fire out of the gates as an expansion team, making the playoffs in its first year and winning a championship in its second. United is one of those cases where assigning legend status to anyone seems odd. The team is only four years old and has played just three seasons. Should Almiron get enshrined among the all-time United greats when “all-time” is so short?

Almiron spent just two years with the Five Stripes before earning his big move to the Premier League with Newcastle United. Unless he one day returns, his stop there will be but a blip in his career. Time will tell if Almiron playing a foundational role in Atlanta will keep him counted among team legends. Atlanta fans will certainly remember him fondly, but that’s not the same thing.

Can a player’s legendary status be revoked simply by the passage of time? No one knows if Atlanta United will repeat the feats of 2018, but the club’s ambition figures to keep it in the conversation. There is no limit on the number of legends a club can have, but other players could come along and overshadow the brief Almiron era. Then again, if Cienfuegos is any example, Almiron is in the pantheon to stay.

Our appreciation of a player and his achievements is less affected by things like rising spending and improved quality of play than seems obvious. There are conversations about whether the great teams of the past could compete with the modern-day leaders, but the slow evolution of the game easily flattens history.

Even across a relatively brief twenty-five years, MLS is subject to that phenomenon. Maybe no other competition on the planet has packed so much into such a short time. The first decade of MLS bears almost no resemblance to the last decade of MLS. Even within that decade there are several mini-eras. Yet the likes of Cienfuegos, Peter Nowak, Marco Etcheverry, and so on deserve their place among the most celebrated players in their respective clubs’ history. Those players might not end up getting mentioned among the best players in the league’s overall history years from now, but they’ll always have a place in the lore of the club where they shined.

Every club can’t have legends, except all of them do. Fans aren’t beholden to any rules. Picking out the heroes of the past is as much about gut feeling as it is about some strict criteria. Justification comes after, if at all. The nature of MLS legends will continue to morph and change just as the league does. What makes a legend? Whatever we decide.