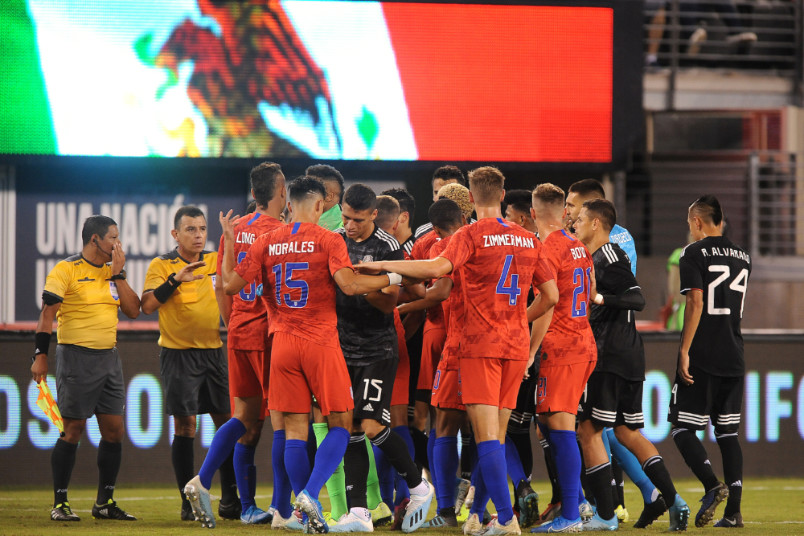 By Luis Bueno – RIVERSIDE, CA (May 27, 2020) US Soccer Players – For years, the Mexican National Team has treated the United States like its second home. El Tricolor, after all, has played on American soil regularly for more than three decades in competitions and friendly matches.

Tens of thousands of fans turn out to see El Tri play here every year. Just based on ticket prices and television revenue, the annual Mexico National Team US Tour is very profitable. It might not be the best way for Mexico to pay respect to its fans back home. It also might be a hindrance to the competitive and developmental side. Still, the finances are in Mexico’s favor to be sure.

That cash flow, however, has dried up due to the COVID-19 global pandemic. FMF President Yon de Luisa announced this week that Mexico would not play closed-door friendly matches in the United States.

If and when Mexican can restart its business in the USA is anyone’s guess. The damage to the Mexican Soccer Federation, the FMF, could be vast. That annual US Tour has to account for a significant portion of their operating budget. The loss of revenue and resources should force the FMF to consider other options for its national team. Finances are important, but the national team has ignored its home fans for decades in favor of playing where it can make the most money.

Other than the potential to make it easier on the visiting team, playing closed-door games in the US doesn’t make any more sense than playing them in Mexico. That’s the pragmatism of the FMF announcement. Without the eager live audiences all over the United States, it’s also not the same marketing exercise. Ease of access to its games only helps Mexico’s American popularity.

American professional sports leagues remain on hold due to the pandemic. The likelihood that leagues resume play with no fans in the stands is quite high. It seems reasonable that no professional sporting event will feature fans in 2020. If that is the case, then the Mexican national team will not play a friendly match in the United States until at least 2021. Even that seems shaky at best, given the current situation.

Outside of the NFL, major American sports leagues are all on hold and trying to figure out how to get seasons going back again. Even the NFL, which recently released its 2020 season schedule, seems like it should have an asterisk next to its slate of games as state and local governments across the country have not allowed for large public gatherings.

Add in the global scheduling problem FIFA has yet to fully address. Other than rumors, some from highly placed officials, there may or may not be a national team window over the remainder of the year. Or FIFA will allow play in October and November. Or December will become an international month. Other than Concacaf insisting that the Nations League will finish and that World Cup qualifying will need adjusting, we don’t know very much.

In this Covid-19 world, leagues and organizations are trying to reinvent themselves. The Bundesliga has returned to play in empty stadiums, the first major soccer league to do so. Other leagues, including Liga MX, have abandoned its competitions. Perhaps this is part of the FMF’s operating plan, to scrap any unnecessary competitions. With travel between the United States and Mexico limited, it would have been difficult to stage games anyway.

The FMF will likely turn to its own stadiums before anything else. If the national team gets together for training and games, it would be easier to do so in an environment it can control, which would be in Mexico. Hopefully, that would lead to more games for the national team in Mexico than in the United States.

The last time Mexico did not play at least one friendly match in the US was 1988. That year, Mexico was involved in a scandal for using overage players at a youth national team tournament. FIFA ended up banning Mexico from the 1990 World Cup.

Perhaps that led to the lack of interest in organizing friendly matches of any kind. The national team only played five games that entire year. Over the years, though, El Tri increased the number of games it played in the US. In the early 2000s, MLS formed Soccer United Marketing that helped organize the matches and streamline revenue to both sides.

This year, Mexico had the Czech Republic in Charlotte and Greece in Dallas in March. Then it was Colombia scheduled for Saturday in Colorado in the run-up to the Nations League semifinals and final in Texas. That’s business as usual for El Tri. When and how that business resumes is another question on a long list for soccer in the region.