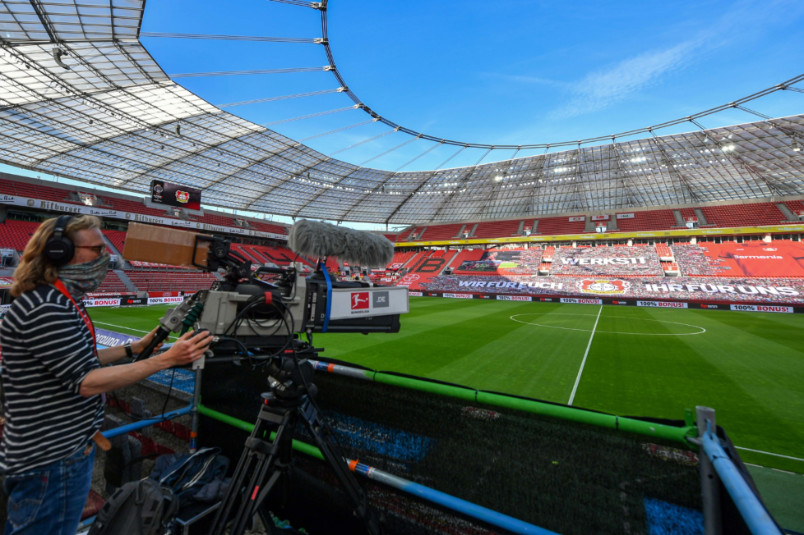 By Jason Davis – WASHINGTON, DC (May 27, 2020) US Soccer Players - Soccer in Germany returning presented unprecedented problems for one of the world's best leagues. The logistics of putting on games requires careful management of players, coaches, and stadium staff to make sure an outbreak of the coronavirus doesn't ruin the whole exercise.

Everything about the operation is delicately poised. The quality of the soccer itself is secondary to just having soccer at all. German football authorities are working to maintain sporting integrity for the competition even as everyone involved is conscious of the impossibility of that task.

It's not just the fitness of the players after a long layoff. Or the uncomfortable process of quarantine ahead of a game. It's not even the congested schedule forced upon the league so the season can finish before July 1. It's the alien nature of games in front of no one. Empty stadiums echo with the sounds of passes and tackles and players yelling to one another. The atmosphere created by supporters is one of the Bundesliga's calling cards. Without it, the game is different.

Tuesday's edition of Der Klassiker, the rivalry match pitting Borussia Dortmund against Bayern Munich, took place at Dortmund's Signal Iduna Park. In normal times, Signal Iduna would be filled to the brim with 80,000 fans singing, chanting, and bouncing with the rhythms of the action on the field. Dortmund's famous Yellow Wall, the collection of die-hard fans who sit in one end of the stadium, would do everything in their power to push on their team and lift BVB over hated Bayern Munich.

Der Klassiker always matters. As is so often the case, this version had implications for the race for the Bundesliga title. Entering the game, Bayern held a four-point lead over Dortmund with just seven games left in the season.

Borussia Dortmund and its fans might be justified in some frustration over the circumstances of the game. No fans mean no noise, no energy, no home-field advantage. The roiling cauldron of Signal Iduna becomes another patch of grass where two teams can play out a soccer match. The benefit of playing at home is part of our understanding of how professional sports are supposed to work. Turning formerly raucous stadiums into neutral venues feels wrong.

So far, the lack of atmosphere appears to be playing a big role in the score lines from the Bundesliga's return. Over the weekend that the season resumed, only one team managed to take all three points in their building. That increased to two last weekend. It's impossible to know if the lack of fans is the only factor in those results, but it follows that the absence of noise coming from the stands would make it easier to play away from home for visiting teams.

Borussia Moenchengladbach placed thousands of cardboard cutouts depicting its fans in mid-cheer for Saturday's game against Bayer Leverkusen, a campaign to raise money for frontline workers during the pandemic. Inanimate versions of supporters can't do much to influence the action on the field. It did offer fans a way to stay connected to their club while giving back to the people working to keep society moving.

Almost any effort to change the dynamic of empty seats is going to be purely cosmetic. Some German clubs put tarps over empty seats, slightly improving the visual. There's only so much teams can do.

Sound presents some interesting possibilities. It also raises questions about just how far clubs should go to add some spice to the surreal proceedings.

Thus far, no team has used its in-stadium sound system to replicate the noise that a building full of fans would provide. Whether the Bundesliga would sign off on such a move is unknown. It does feel beyond the line of fairness if such a thing exists in these strange times.

Crowd noise has become a topic of conversation in recent weeks, though only through the prism of television broadcasts. After a round of games broadcast only with the natural sounds of the field, TV companies are turning to recorded crowd noise to add to the product beamed into homes around the world.

Teams still play in the relative silence of empty arenas, the instructions of coaches, and the communications of the players echoing in the space. At home, some viewers are getting a layer of illusion, thanks to a German-produced audio track that accompanies the typical commentary.

Making the fake supporters sound intelligent is the responsibility of a sound producer based at Sky Deutschland's headquarters near Munich. German soccer fans have the option of listening to the track by pushing a button on their remotes.

Bundesliga TV partners around the world make their own choice about adding the fake fans to their broadcasts. Fox Sports in the United States included the audio track on games over the weekend and on Tuesday. The Der Klassiker match between Dortmund and Bayern sounded almost like a normal game, with the crowd whistling when Bayern had the ball and the cheers seeming to rise when Dortmund was threatening to score.

The psychology of the experiment is fascinating to consider. As fans, we are keenly aware the crowd noise is artificial. If we allow it to fool us and suspend our disbelief as we would with a movie or TV show, our brains might accept the fake crowd sound and let it improve the watching experience. Only those willing to let themselves imagine will find any joy in the theater.

The Bundesliga's rolling experiment will be an example for other leagues to ponder ahead of their relaunches. One of the Premier League's biggest selling points is its singing and chanting. Without that, does the world's most popular soccer league lose some of its appeal?

While Major League Soccer's plans to return to the field are still under consideration, the league will most likely play games with no fans this year. If those games are played on open fields or in small venues, piping in crowd noise will seem even more out of place than it did in Germany. The suspension of disbelief comes easier against the visual backdrops of large stands. MLS is unlikely to have the luxury. The limits of "any soccer is better than no soccer" will get a full test.

Nothing about this moment is normal or comfortable. Fans bothered by the artificial noise in German stadiums aren't wrong. Nor are those who enjoyed the illusion of full stadiums because it gave the games a semblance of normality.

There's a question present in all of this: What is soccer? Is it the 22 men on the field, the ball, and the back-and-forth of 90 minutes but nothing more? Is it the stadiums, the fans, the culture, the things that are now painfully inaccessible to us?

If it's the former, we can do without fake crowd noise and a DJ attempting to approximate a real game. If it's the latter, maybe a little fakery can trick us into enjoying whatever this is just a little bit more.