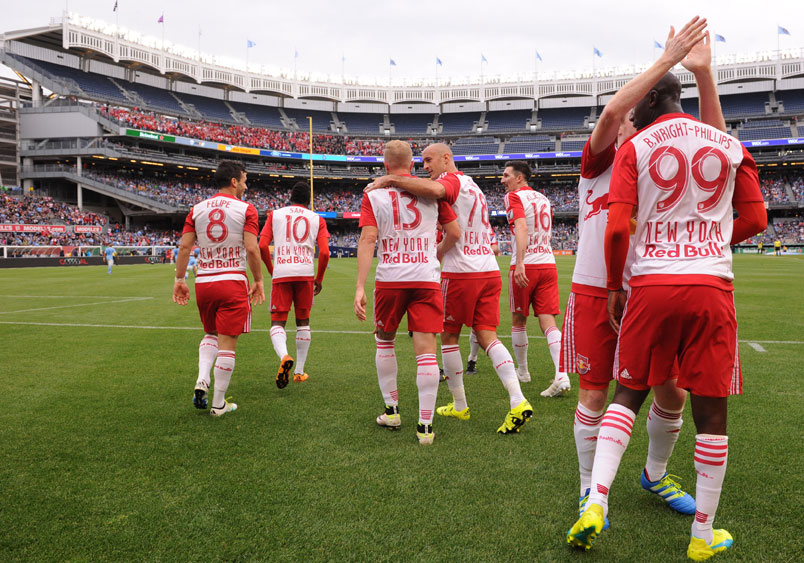 By Clemente Lisi – NEW YORK, NY (May 24, 2020) US Soccer Players – This season marks the fifth year of the Hudson River derby. If not for the pandemic putting the season on hold, the New York Red Bulls and New York City FC would be preparing to play each other this coming Sunday at Yankee Stadium. A frozen schedule means looking back at the rivalry’s past and it’s importance to MLS. If anything, the lack of live sports has given fans a second chance to rewatch games. Reminiscing about past victories, while wanting to forget the losses, is at the center of such renewed debates.

New York has a storied soccer past. The New York Cosmos featured megastars that dominated the NASL for much of the 1970s and early ’80s. When MLS came along in 1996, the New York/New Jersey MetroStars were the first topflight team in New York since the NASL collapsed in 1984.

While the MetroStars and later Red Bulls played in nearby New Jersey, NYCFC’s arrival in 2015 marketed itself as the city’s team since they played at Yankee Stadium in the Bronx. What has evolved is a heated rivalry between teams a short drive from each other. The rivalry involves an entire region and has produced a number of memorable matches.

So which is the better team? On the eve of what would have been another installment of the RBNY-NYCFC derby, a look at five categories and which team has been best over the last five years.

Over the course of 16 games, the Red Bulls have outscored NYCFC 34-16. Even if you strip out the 7-0 away win, that still leaves RBNY with 27 goals, an 11-goal edge over their intra-city rivals. Scoring certainly has helped the Red Bulls in this rivalry, winning games by a margin of three goals or more on three occasions: 4-1 in 2016 and 4-0 (twice) in 2018.

The 7-0 win, however, remains memorable. It also broke a number of records. The Red Bulls equaled the Chicago Fire who also recorded a 7-0 win against Kansas City in 2001 and the LA Galaxy’s 8-1 win in Dallas in 1998 with its seven-goal margin of victory. It was also the first time in league history that three subs scored in the same game: Gonzalo Veron, Gideon Baah and Alex Muyl.
Edge: Red Bulls

The leading scorer in this series is former Red Bulls striker Bradley Wright-Phillips. The English-born forward has scored 12 times against NYCFC since the rivalry began. Should the season resume this year, NYCFC won’t have to worry about Wright-Phillips’ prowess since he recently moved over to Los Angeles FC.

“I think he’ll be missed by the Red Bull fans, but we won’t complain that his amount of goals is taken out of the team,” NYCFC goalkeeper Sean Johnson told MLSSoccer.com.

The top scorer for NYCFC has been former Spanish international David Villa with five goals, tied for second overall on the list with Red Bulls winger Daniel Royer. While Villa retired in 2019, Royer remains with the Red Bulls.
Edge: Red Bulls

Since 2015, the Red Bulls have made the postseason five times and in dazzling fashion. The Red Bulls finished first in the Eastern Conference in three of those years: 2015, ’16 and ’18. The furthest in the playoffs the Red Bulls got in that span of time was the Conference Semifinals in both 2015 and’ 18.

By contrast, NYCFC missed the playoffs in 2015, its expansion season, but made the postseason the following four years. In all those appearances, NYCFC exited the playoffs in the Conference Semifinals. Last season, NYCFC came in first in the Eastern Conference. While the Red Bulls did better in the regular season, NYCFC was most consistent in their four appearances in the MLS Cup Playoffs.
Edge: NYCFC

Perhaps the biggest knock against NYCFC is that they have never taken the US Open Cup seriously. The team was also one-and-done in 2015 and ’16, eliminated by the New York Cosmos on both those occasions. Last season, NYCFC reached the quarterfinals, only to lose to Orlando City SC in a shootout.
Overall edge: Red Bulls