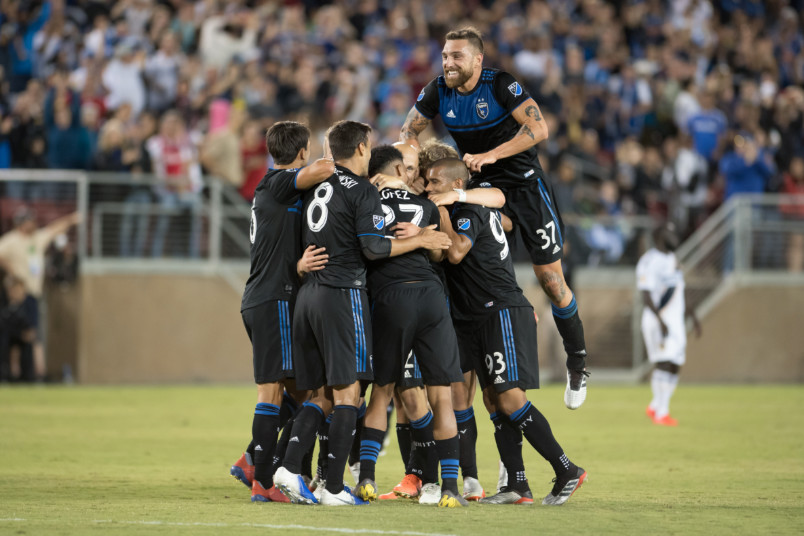 By Luis Bueno – RIVERSIDE, CA (May 13, 2020) US Soccer Players – When the 2020 MLS schedule was first released, players and fans alike circled several games on the calendar. Undoubtedly inside those circles were those teams’ rivals. Nothing builds the excitement like playing against teams that fans love to hate.

MLS scheduling takes into account these feelings and puts these games together in a nice, neat package called Rivalry Week. This week, in fact, is Rivalry Week, though it is likely few are aware of this unless you pay a visit to the league’s web site and social media platforms. After all, only a masochist would peruse the league’s schedule knowing those games won’t happen.

Still, the league carries on with Rivalry Week of a sort. Among its broadcasts of previous rivalry games is a smattering of LA Galaxy vs LAFC matches. From Monday through Sunday, the league is broadcasting 22 matches and one best-of compilation. Four of them are of the Los Angeles derby.

Those games are certainly exciting and created a buzz across the Southland. Still, the league seems almost to be pushing those games on its fans instead of highlighting one of its best rivalries. The Galaxy and LAFC have a budding rivalry, sure, but the Galaxy’s main rival is the unquestionably the San Jose Earthquakes. The Cali Clasico is, outside of Seattle vs Portland, the league’s top rivalry. Yet among the 22 broadcasts and one best-of compilation, only one is of a Cali Clasico.

The Cali Clasico alone could fill a 22-match hole and have plenty left over for a best-of compilation. Aside from the playoff matches such as MLS Cup 2001 and memorable playoff meetings in 2003 and 2012, the Cali Clasico is littered with scores of momentous regular-season meetings as well. While the Galaxy-LAFC rivalry is certainly one to invest in for the long haul, the Cali Clasico has generated many special moments over the years in a much more organic manner than the LA derby has in its brief two-season history.

Part of that, of course, is geography. Southern California has a natural rivalry with northern California. The Dodgers vs Giants were longtime rivals in New York and transplanted that rivalry out west when the two Major League Baseball franchises uprooted after the 1957 season. The LA Lakers have had a healthy rivalry with both the Golden State Warriors and the Sacramento Kings in the NBA over the last several decades. The NHL’s LA Kings have tussled with the San Jose Sharks in lively SoCal-NoCal battles during that span as well.

It was always natural that soccer would follow along those lines when MLS opened for business in 1996. The first four seasons’ worth of LA vs San Jose matches were relatively one-sided, with the Galaxy winning 12 of 16 games during the shootout era.

Big moments and polarizing players help lift rivalries up. The Cali Clasico has had many of those. It was those factors, in fact, that helped bring life to this derby. MLS Cup 2001 was a massive moment for the Earthquakes and great heartache for the Galaxy. Two players who played big roles in the rivalry were prominent that day as Landon Donovan and Dwayne DeRosario scored in San Jose’s 2-1 golden-goal MLS Cup triumph over the Galaxy. They delivered another humiliating win over the Galaxy two years later when the Quakes made an epic comeback in the 2003 playoffs. The Galaxy knocked San Jose out of the playoffs and, briefly, out of existence with a win over San Jose in the 2005 playoffs en route to an MLS Cup victory. San Jose moved to Houston and won two consecutive MLS Cups following that setback.

San Jose’s return to MLS in 2008 simply meant that the Cali Clasico could pick up where it left off. The clubs did just that. Both had epic victories over one another in regular season and postseason play since then. Mike Magee’s foray in goal, contributing to his cult status with the Galaxy, happened in a game against the Quakes. Alan Gordon scored some clutch goals against the Galaxy in 2012 and 2013 when the Goonies were in full effect.

Since 2012, San Jose has hosted the Galaxy at Stanford Stadium every summer. Each game has drawn more than 50,000 fans. San Jose is 5-1-2 in those games and they have been as intense and passionate as any other MLS rivalry during that span.

However, the league is quick to capitalize on trends. LAFC and the Galaxy are certainly trendy, at least their growing rivalry is. LAFC has been the hot-ticket item since joining the league while the Galaxy has tried desperately to remind everyone in Los Angeles that its club has been around since 1996. Despite the horrific name of El Tráfico, the Galaxy-LAFC rivalry will likely become one of the league’s best.

This week could have played a vital role in that growth, with the Galaxy’s Javier “Chicharito” Hernandez set to visit Banc of California Stadium for the first time. The game would have been the Galaxy’s chance to redeem itself after losing to LAFC in the 2019 MLS Cup playoffs.

Ironically, it was in those same playoffs where LAFC fell to a club that is quickly becoming a rival. LAFC’s loss to Seattle in the conference final was certainly disappointing for LAFC. It was a standout moment in a series that has already seen some great battles between the two teams. LAFC’s first-ever win and first home win both came against Seattle in 2018. LAFC had bested Seattle 4-1 in April before bowing out to the Sounders in October.

Both the Galaxy vs LAFC and LAFC vs Seattle rivalries will continue to grow and will become great rivalries over time. However, it’s worth acknowledging that right now the Galaxy’s main rival remains San Jose.