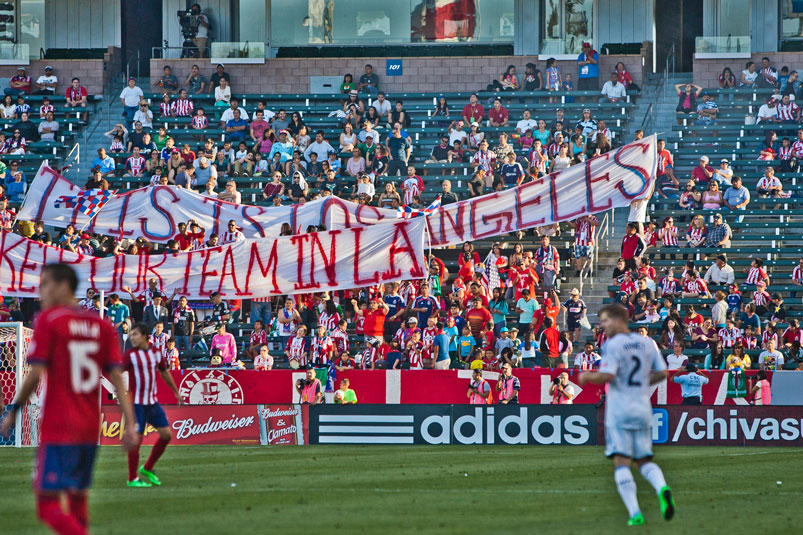 By Clemente Lisi – NEW YORK, NY (May 4, 2020) US Soccer Players – While MLS celebrates its 25th season, there are other anniversaries worth looking back on this year. It was 15 years ago this season that the league tried something new with expansion club Chivas USA. The franchise, which played its first season in 2015, would have turned 15 years old this spring.

Chivas USA only lasted ten years, exiting the league after the 2014 season. It became the third team in league history to disappear, following the contraction of the Tampa Bay Mutiny and Miami Fusion in 2002. With the team itself moving to Houston as the Dynamo, the league put the San Jose Earthquakes for two years beginning in 2006. In MLS, the normal move for a franchise in obvious trouble is to close it down.

The Chivas experiment, one viewed mainly as a failure, did allow MLS to learn a few valuable lessons, weigh the pluses and minuses of future expansion, and which cities and investor/operators could ultimately work best under its unique single-entity structure. Over the 25-year lifespan of MLS, the Chivas USA story remains one of the oddest chapters in league history.

Chivas USA was based in Los Angeles as a subsidiary of Mexican club CD Guadalajara and shared the same ownership. The team played at StubHub Center (now known as Dignity Health Sports Park), in Carson, a suburb of Los Angeles, and shared the venue and practice fields with the Galaxy. The move into MLS by billionaire Jorge Vergara was, in part, a branding exercise. Like European clubs, Chivas wanted to become an international brand. Establishing a team across the border in Southern California seemed like a no-brainer. The area’s demographics would also give Vergara a fanbase from the start.

For Vergara, Chivas could be a global brand on par with Barcelona and Manchester United. By 2014, a defeated Vergara admitted that for Chivas USA to be successful, it would “require more time, further resources, and a level of commitment that would divert too much of our focus from our other business interests.”

While Los Angeles was an obvious choice with the built-in rivalry with the Galaxy, other cities with large Latino populations were under consideration early on. In August 2004, Chivas USA became a reality with LA its home base after paying MLS a $7.5 million expansion fee. Vergara had seen the potential of MLS after Chivas Guadalajara played the MLS All-Stars in 2003.

“We’re going to make the Home Depot Center the home of Chivas,” Antonio Cue, the then-investor/operator of Chivas USA along with Vergara, told reporters. “We’re going to bring our traditions and field a competitive team. We will be champions, I have no doubt about it.”

It was amid all this hype and fanfare that Chivas USA started the 2005 season, entering the league as an expansion side at the same time as Real Salt Lake. Coached by Thomas Rongen, the team kicked off its inaugural season at home with a 2-0 defeat to the defending MLS Cup champions DC. After a poor 1-8-1 start, Rongen moved upstairs as sporting director, while assistant coach Javier Ledesma became the team’s interim coach. By June, Hans Westerhof was head coach. The team went 4-22-6, missed the playoffs, and ultimately fired Westerhof. Vergara’s dream of American success and expanding the Chivas brand had not gone according to plan. That 2005 Chivas USA team could easily rank as one of the worst ever in MLS history.

The year’s spanning 2005 and 2009 brought with it success to the point that some have forgotten how competitive the team was back then. Bob Bradley replaced Westerhof, finishing the 2006 season with a 10-9-13 record and making the playoffs. That won Bradley MLS Coach of the Year, while defender Jonathan Bornstein won Rookie of the Year. The success paved the way for Bradley to get the USMNT job. The team named Bradley’s assistant Preki, a two-time MLS MVP, coach ahead of the 2007 season.

Under Preki, Chivas became very successful. Brad Guzan won Goalkeeper of the Year after the team went 15-7-8 to win the Western Conference. Highlighting the year was the play of attacking midfielder Sacha Kljestan, who earned a spot on the National Team as a result, and striker Ante Razov. Preki, meanwhile, won Coach of the Year.

Chivas USA made the playoffs again in 2008 and ’09, losing in the Conference semifinals both years. 2009 would be the last time the team would make the playoffs, exiting to the Galaxy. This is the moment the Chivas USA experiment collapsed. A team with so much promise, both on the field and off of it, seemed to fall apart.

The Goat’s struggles on the field starting in 2010, affecting the business decisions Vergara and other club executives made. It was in August 2012 that Vergara and his wife Angelica Fuentes became sole investor/operators of the team, buying out former partners Antonio and Lorenzo Cue for $35 million. The following May, two Chivas USA youth coaches, Dan Calichman and Ted Chronopoulos, filed a discrimination lawsuit against the team on grounds they had been fired for not being Hispanic. Chivas had lost the marketing battle to the Galaxy. Now it was losing the public relations fight in the press. While the Galaxy was basking in the glory of having signed David Beckham, Chivas had turned into a laughingstock.

After Vergara’s full takeover, he allegedly told his staff that the club only wanted Spanish-speaking employees. According to Chronopoulos, Vergera once told employees, “If you don’t speak Spanish, you can go work for the Galaxy.” The lawsuit, which drew attention from national sports outlets and a segment on HBO’s Real Sports, was eventually resolved, although no details were made public.

Litigation aside, too many changes on and off the field didn’t help the team. Poor results and slumping attendance (from 19,000 at its peak in 2006 to half that by 2013) added to the problems. The team finally decided to cease operations following the 2014 season.

Earlier that year, the league had purchased the club from Vergara, reportedly for $70 million dollars. MLS Commissioner Don Garber told reporters at the time: “We’re not in a rush. We believe in the opportunity (in Los Angeles). We’re going to try to find a great local owner, and we’re going to marry that owner with a strong stadium plan.”

Having two teams in the country’s second-largest market remained a focal point for MLS. During Chivas USA’s 10-year existence, LA was the only MLS market to have an intra-city derby. In all, Chivas and the Galaxy faced off 34 times, with the Galaxy holding a 22-8-4 record in what was called the “SuperClasico.”

“These games are always a battle,” Galaxy defender Omar Gonzalez said in 2010. “We play in the same stadium, we practice on the same campus. We always want to beat each other.”

MLS eventually sold the Chivas franchise to a large investor group led by venture capitalist Henry Nguyen and Mandalay Entertainment CEO Peter Guber. The group launched Los Angeles FC, a team with its own stadium in the city’s downtown and beginning play in 2018. The new LA derby between the Galaxy and LAFC, known as “El Traffico,” has been a resounding success in the region and with national TV audiences.

While LAFC has been a big success in just two seasons, Chivas USA remains a story focused on failures. It’s easy to forget that Chivas USA was a contender in their early years. The club turned out to be a poor fit for MLS, but the league learned valuable lessons for the second attempt at making LA a two-team town.