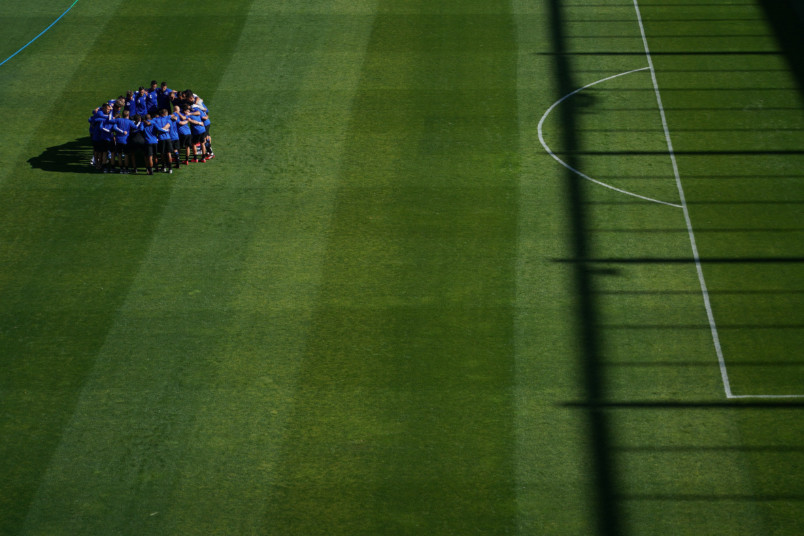 By Charles Boehm – WASHINGTON, DC (Jun 26, 2020) US Soccer Players – Ready or not, MLS is Back, or at least on its way. In less than two weeks, the league resumes at the Disney Wide World of Sports Complex on Orlando’s outskirts. Though the central Florida region has become a flashpoint for the state’s COVID-19 outbreak in the weeks since Major League Soccer announced the event, MLS is plowing ahead.

This week the San Jose Earthquakes became the first team to arrive on site, which may represent crossing a Rubicon of sorts. It also underlines why the league is returning to play in this format. The Quakes traveled so early because local regulations back home prevent them from full team training. With the unique situation we’re all in impossible to ignore for very long, here’s five questions to ponder as MLS goes to Disney World.

Will the bubble hold?

It’s not hard to tell that this is the million-dollar question. In truth, it probably has an even bigger amount riding on it. MLS is bunking all 26 teams at a Disney resort facility as a means of control during a pandemic. There’s a seemingly thorough testing regimen alongside regulations for how players and staff interact with the outside world. It’s a quarantine, albeit not a full one. A quasi-quarantine, perhaps.

The resort’s staff will not be isolated. When they go home at the end of their shifts, it opens up the potential for viral contamination back and forth. The MLS delegations are abiding by an honor system rather than being truly and securely locked down for weeks at a time. It makes for a sizable gamble for a league and its television partners keen to make this venture work.

Like everything else in this pandemic, everyone involved is learning as they go, including the public-health experts and epidemiologists. This week, Forbes’ Ian Quillen laid out an unsettling worst-case scenario in which a COVID outbreak ripples through the MLS camp and leads to career-ending sickness for a few players and embarrassment and litigation for the league.

What are the odds of such a disastrous turn of events? Could a last-minute flurry of positive tests sink an entire team’s participation as it did with the NWSL’s Orlando Pride in that league’s hub tournament? We don’t really know.

How much will players and fans buy in?

It naturally follows on that not everyone is thrilled about taking part in this thing. Even if MLS handles everything in its power flawlessly, it’s still a prisoner to matters outside its control. Whereas the Bundesliga has been back underway for a month thanks in large part to the German government’s adept handling of the crisis, COVID-19 appears to be roaring across large swaths of the United States unchecked.

The federal government as well as many states are facing uncomfortable questions about their handling of the situation. The protests and backlash in the wake of George Floyd’s murder last month have escalated the public’s frustrations and added another life-or-death conversation that many believe should preempt sports.

Several MLS players have basically expressed these sentiments openly. We’re still waiting on the full rundown of which ones will get clearance to skip this event. Among those who do jet to Orlando, it’s far from certain that all teams will approach this tournament with the same intensity and commitment levels. Given the wider instability wracking the nation, it’s easy to relate to anyone with doubts.

No tourney for old men?

In my conversations with players around MLS over the past few months, most express excitement at getting back to even a facsimile of their usual routines. Soccer is not just what they do but who they are. Those with reservations about the tournament concept tend to be veterans.

Older players normally have family members they need to help care for and protect from viral exposure. Those with children pay a more tangible cost when leaving their partners at home for weeks at a time. They’re often more focused on established achievements than a newfangled venture like MLS is Back.

The event’s parameters may also prove particularly daunting for them as well. The format imposes a minimum of three matches in a little over a week. There’s further action in a tight window for those who qualify for the knockout stages.

Even with five substitutes allowed, it’s a heavy dose of play for bodies that haven’t performed at full bore since early March. The ongoing flurry of free-agent, Homegrown, and USL affiliate signings around MLS hints at the roster depth teams expect to need for all this. It appears that kids will get chances to make a positive impression. Younger sides like FC Dallas seem to be some of the most enthusiastic about making a real run at this trophy.

Orlando in the summer is a fairly harsh environment, with blazing sun and debilitating humidity. That’s necessitated a quirky schedule of morning and late-night games.

How will the breakfast matches play out?

The 10:30pm ET nightcap games are not unheard-of for MLS viewers. It’s the 9am ET kickoffs that are unusual. That could prove interesting in both television and real-life matchday terms.

“I don’t remember even in my youth playing at 9am. I think the earliest was 11,” NYCFC midfielder Alex Ring told reporters in a conference call on Wednesday. “I don’t know when I have to get up for [the pregame] meal, probably at 5 in the morning right? It’s not optimal. You know me, I don’t complain too much. But I do think it’s a compromise we’re making as players, for sure.”

For the most part, this isn’t going to be an issue for West Coast teams. With the exception of one game for the Seattle Sounders, they won’t be playing at 6am in their home timezone. Real Salt Lake will play a morning match when it’s 7am back in Utah.

The big winners in this scenario are probably the TV networks, who reportedly like having live action to fill this time slot on their schedules. North American audiences have experience in tuning in bright and early. It’s just that the players they’ve been watching in those properties are still adhering to their typical matchday routines. Could breakfast hour strangely turn out to be a ratings boon for MLS? It’s yet another patch of uncharted territory.

Will MLS and ESPN get the optics right?

The chance to get back underway sooner than later is obviously a big factor here for MLS and its TV partners. There’s also ample risk to go along with that potential reward.

One veteran striker told me earlier this month that he expects these Orlando games to have a preseason vibe, and that’s understandable. They’ll play out in a quiet training complex with no fans present, with stakes that may not inspire everyone to an equal extent. It’s the job of host broadcaster ESPN to counter that with their presentation and production. We’re told they have some new and more interactive features planned along those lines.

Beyond that, the executives in charge have an even more elusive challenge. That’s to reflect the wider mood of the moment. A deadly pandemic is tormenting the world. Millions of people are also suffering from the economic crash that it precipitated. In the US context, the Black Lives Matter movement has become a central part of daily life in the push for social justice. November’s looming presidential election cranks up the intensity even further.

Many people and organizations in and around MLS have spoken out passionately since Floyd’s killing. If this tournament ends up as more of a distraction from those important conversations rather than a chance to amplify them, they will react accordingly. It’s no easy tightrope for those in charge to navigate.