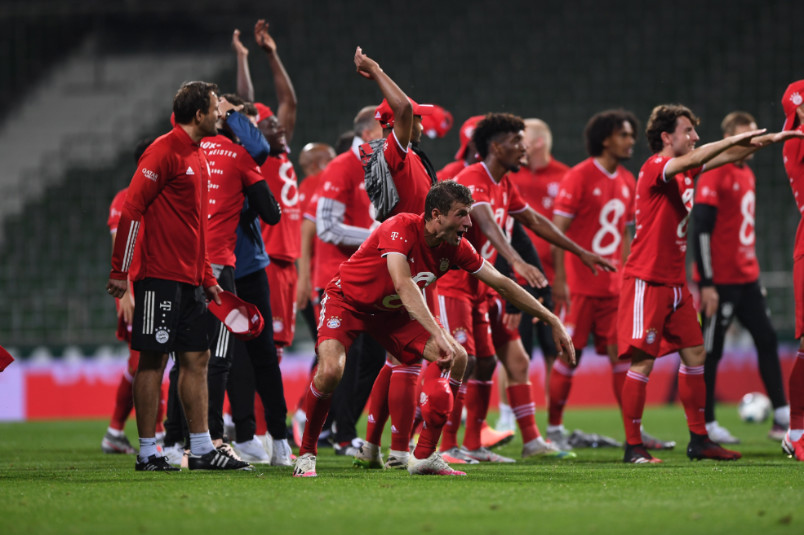 Wednesday's soccer news starts with Bayern Munich turning only a matter of time into the 2019-20 Bundesliga title. A 1-0 win at Josh Sargent's Werder Bremen has Bayern top of the table for good with 76 points after 32 games. The goal came from Robert Lewandowski in the 43rd minute with Alphonso Davies seeing red in the 79th. Sargent subbed on in the 62nd minute.

"We’re German champions," Lewandowski said. "It's obviously a bit difficult celebrating without fans. That certain something extra, that passion is lacking. We're nevertheless very happy. It's not been an easy season, we've fought long for the title. I hope we get to celebrate with the fans in the stadium soon. In the first half, Werder played rather defensively but played well. In the second half we needed to score to make it a bit easier. We've shown we're the best team in Germany and we want to play even better in the Champions League."

SI.com's Jonathan Wilson on Bayern's eighth title in a row. DW with what Bayern's title run means for the rest of the Bundesliga.

Staying in the Bundesliga, John Brooks's Gladbach shutout Wolfsburg 3-0 at home. Jonas Hoffman scored in the 10th and 30th minute with Lars Stindl adding a goal in the 65th. Fabian Johnson wasn't in the squad for Wolfsburg.

"We knew that we were without a few important players, but the lads who came in did a good job," Stindl said. "It's something that's defined us this season. I'm really happy for those players, but also for the whole team for making a real statement today. We took our chances clinically and hardly allowed them any chances. The game was wrapped up after our third goal. The top four is still up for grabs. We've taken the first step and now we want to follow it up in Paderborn."

A league down, Julian Green subbed out in the 82nd minute for Furth's 0-0 home draw with Heidenheim. Green saw yellow in the 64th minute. Bobby Wood wasn't in the squad for Hamburg's 1-1 home draw with Osnabruck. Erik Palmer-Brown wasn't in the squad for Austria Vienna's 1-0 home win over WSG in the Austrian Bundesliga. Alexander Grunwald scored in the 3rd minute with WSG going down a man five minutes into stoppage time.

Also in the soccer news, UEFA announced how the Champions League will conclude. The round of 16 finishes on August 7 and 8. Lisbon will host the rest of the tournament from August 12 through the 23 with the quarterfinals and semifinals as single-game knockouts. Benfica Stadium will host the final. UEFA is moving the remaining rounds of the Europa League to Germany's North Rhine-Westphalia region from August 10 through the 21. The Europa League has round of 16 series that have yet to start, with those two moving to single games. Those games and the rest of the round of 16 will finish on August 5 and 6. Cologne will host the final.

"I am delighted that we are able to resume almost all of our competitions," UEFA president Aleksander Ceferin said. "I am confident that we will not have to endure the fans’ absence for long and that they will be allowed into stadiums sooner rather than later. UEFA took a bold decision when it decided to postpone EURO 2020. But in doing so, we created the space which has allowed domestic club competitions across the continent to resume, where possible, and play to a conclusion. While the game has suffered huge difficulties as a result of the pandemic, those blows would have landed much harder if we had not shown leadership in those early days."

AP's Rob Harris explains the Premier League's plans in case of a second wave of the pandemic. Inside World Football's Samindra Kunti reports on Kaiserslautern's bankruptcy filing. The Ringer's Musa Okwonga explains why it's a mistake to treat soccer without fans as anything close to normal.