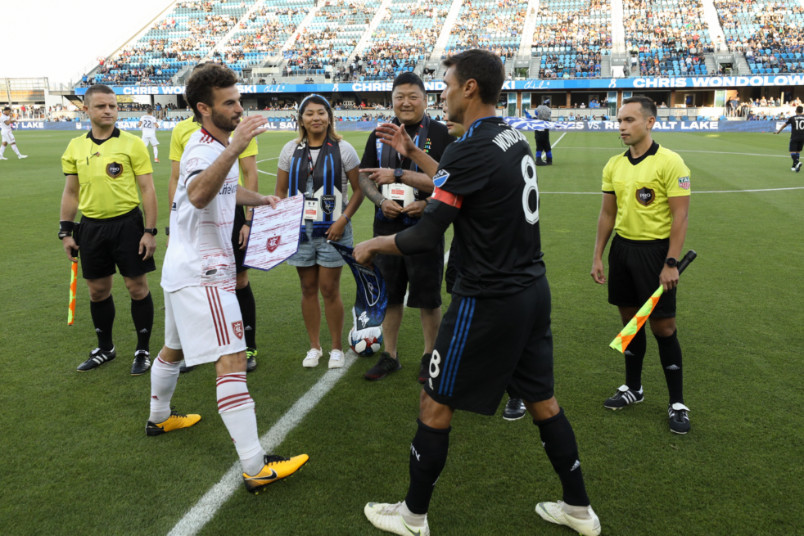 By Jason Davis – WASHINGTON, DC (Jun 24, 2020) US Soccer Players – Soccer, as they say, is a young man’s game. It’s the rare player who’s prime doesn’t come in their 20s, when a body is at its peak fitness and the ravages of time and miles haven’t yet slowed a person down. Age isn’t always the determining factor in a player’s effectiveness, but it’s always an important one.

Occasionally, a player slowed by time can make up for what they’ve lost in physical prowess with experience. There’s another saying, “there’s no substitute for experience.” While “older” doesn’t always mean “wiser,” players with a wealth of history playing the game are often capable of things their younger, greener teammates are not.

It’s with all that in mind that we consider a few of Major League Soccer’s elder statesmen ahead of the MLS Is Back tournament set for Orlando starting July 8. For at least one of the league’s celebrated veterans, 2020 was a swansong. Whether he still plans to call it a career following a strange, pandemic-impacted campaign is anybody’s guess.

No one knows what the tournament, the post-tournament season, and the offseason will bring. The “he” in question here is Chris Wondolowski, the all-time MLS goalscoring leader and a player for whom pure athleticism has always been secondary to cleverness.

Wondolowski’s rise to the top of the all-time MLS scoring charts is well-documented. After playing college soccer at Chico State University in his native California, the San Jose Earthquakes selected Wondolowski in the 2005 MLS Supplemental Draft. Wondolowski’s arrival at the professional level happened so long ago that the process he used to become a pro doesn’t even exist anymore. MLS killed the Supplemental Draft in 2013 when the available pool of unattached amateur talent dwindled in light of MLS academy efforts.

Early on, Wondolowski got mostly reserve minutes with the Quakes. He went with the team to Houston when it became the Dynamo in 2006. A handful of goals and three seasons later, the Dynamo sent Wondolowski back to San Jose to the new Earthquakes in 2009.

Over the following decade, Wondolowski turned himself into the league’s most consistently good goalscorer. Now 37, his time as one of the league’s elites in that area would seem to be at an end. Instead, he scored 15 goals in 32 appearances last season, bouncing from the bench to the starting lineup and back, depending on the whims of head coach Matias Almeyda. Wondolowski’s 15 goals not only gave him a 10th consecutive season with double-digit goals, but it was also good enough for a tie for fifth on the league’s scoring charts. No American scored more goals in 2019 than Wondolowski.

How much of a role will Wondolowski play in the Quakes’ run at MLS Is Back in a few weeks? Like everything else with the tournament, much of that is a mystery. The quick burn of the group stage with clubs will play three games in two weeks follows months without competitive matches. That leaves everything up in the air.

The conventional wisdom says that it will be an “all hands on deck” approach for most teams in Orlando. Even barring any players opting out of the tourney or sidelined by a positive COVID-19 test, all 26 MLS teams will stretch thin in the humid environment of Central Florida.

In the only two games of the regular season played before the shutdown, Wondolowski came off the bench with about 30 minutes to go, first in a draw in Toronto, and then in a home loss to Minnesota. It seems likely that Almeyda will use his veteran goalscorer similarly in Florida.

While Wondolowski has hinted that 2020 will be his last season, Kyle Beckerman hasn’t been as explicit. The Real Salt Lake midfielder agreed to a new contract with the club just ahead of the 2020 season, keeping him on the team’s roster for a 14th year.

2020 is Beckerman’s 21st MLS season, easily making him the longest-tenured player in the league. After starting his career in Miami, the midfielder played five-and-a-half seasons in Colorado before landing at Real Salt Lake in 2007. Over that span, he has failed to make at least 25 starts in a season just twice.

One of those seasons was 2019 when Beckerman lined up for the opening whistle 24 times under Mike Petke and Freddy Juarez. Even at 38, the midfielder proved indispensable for two different coaches in a rocky year marked by off-field drama. Beckerman’s status as a team leader became even more important coming into the new year with the retirement of legendary goalkeeper Nick Rimando.

Beckerman remains one of the last links at RSL to the championship-winning team of 2009. He was a part of the side that went all the way to the Concacaf Champions League final two years later.

Though he hasn’t said whether he’s ready to stop playing after the 2020 season, Beckerman did say that he was ready to retire if RSL hadn’t offered him a new contract for the season. Following two decades of manning the midfield in MLS, Beckerman holds records for regular-season games played at 488, games started at 456, and minutes played at 40,772 for non-goalkeepers.

Like with Wondolowski, Beckerman’s decision might be affected by the way the rest of 2020 plays out. The MLS Is Back tournament is still moving forward as of this writing. It would be naive not to think that a spate of infections inside the league’s bubble or the rising infection rates in Central Florida would change things.

MLS is also still planning to play some form of a regular season following MLS Is Back. That too is still just a plan. If the league does return with some form of a season with playoffs, we can treat it as an “acceptable” season and move forward. MLS veterans like Wondolowski and Beckerman can then feel more comfortable with taking their final lap in 2020.

Wondolowski and Beckerman aren’t the only long-serving MLS vets with decisions to make about their playing futures. Still, they’re the ones so fully identifiable with their clubs and the league that they make a bigger point. If whatever happens with this season is good enough to cap these types of careers, it’s good enough.