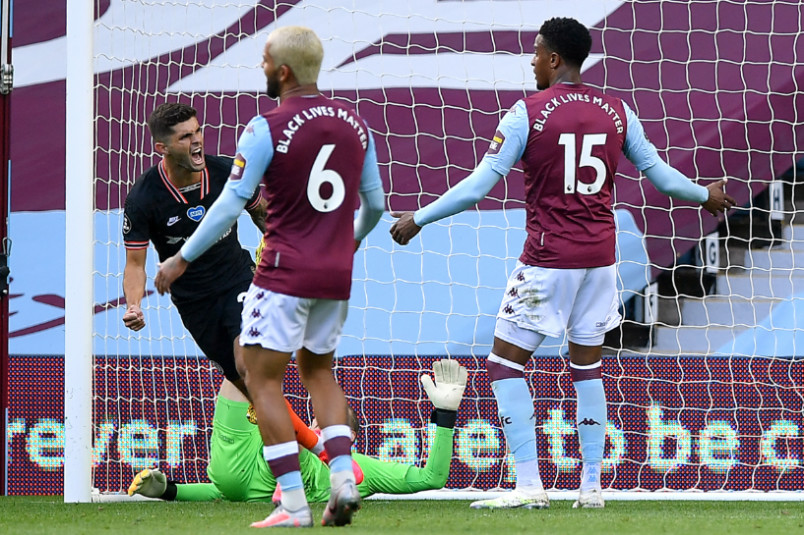 The roundup of USMNT players in Europe starts with the return of the Premier League. Christian Pulisic subbed on in the 55th minute and scored in Chelsea's 2-1 win at Aston Villa. Trailing from the 43rd minute, Pulisic equalized in the 60th minute. Oliver Giroud scored Chelsea's winner in the 62nd.

"The way it was going, we needed a bit of inspiration and Christian gave it with his goal," Chelsea manager Frank Lampard said. "I thought Ross did really well too. I keep saying to the players how important subs could be in this period, and they showed that."

DeAndre Yedlin subbed on in stoppage time for Newcastle's 3-0 home win over Sheffield United. Newcastle went a man up in the 50th minute with Allan Saint-Maximin scoring in the 55th. Matt Ritchie made it 2-0 in the 69th with Joe Linton scoring in the 78th minute.

A league down, Geoff Cameron wasn't in the squad for QPR's 1-0 home loss to Barnsley in the Championship. The game's only goal came in the 7th minute. Matt Miazga missed Reading's 1-1 home draw with Stoke City. Lucas Joao scored in the 7th minute with Stoke City equalizing two minutes into stoppage time. Tim Ream's Fulham lost 2-0 at home to Brentford. The goals came in the 88th and 90th minutes. Luca De La Torre wasn't in the squad for Fulham.

Antonee Robinson subbed out in the 86th minute of Wigan's 2-0 shutout at Huddersfield Town. Jamal Lowe scored in the 26th with Anthony Pilkington doubling the lead in the 48th. Duane Holmes subbed out in the 62nd minute of Derby County's 3-2 win at Millwall. Falling behind in the 15th minute, Louie Sibley scored in the 26th, 71st, and 90th minutes. Millwall pulled a goal back in stoppage time. Cameron Carter-Vickers's Luton Town drew 1-1 at home with PNE. Falling behind in the 52nd minute, Callum McManaman equalized in the 87th.

In the Bundesliga, Tyler Adams's subbed on at halftime for RB Leipzig's 2-0 home loss to Borussia Dortmund. Leipzig fell behind in the 30th, giving up another goal in stoppage time. USMNT youth international Gio Reyna assisted on Dortmund's opener, picking up a yellow card in the 50th and subbing out in the 81st minute,. Weston McKennie's Schalke lost 4-1 at home to John Brooks's Wolfsburg. Wout Weghorst scored in the 16th minute for Wolfsburg, making it 2-0 in the 56th. Kevin Mbabu extended the lead to 3-0 in the 58th with Joao Victor scoring in the 69th. Rabbi Matondo scored for Schalke in the 70th. Timmy Chandler subbed out int he 63rd minute for Eintracht's 1-1 draw at Cologne. Trailing from a 45th minute penalty, Bast Dost equalized in the 72nd.

Fabian Johnson wasn't in the squad for Gladbach's 3-1 win at Paderborn. Patrick Herrmann scored for Gladbach in the 4th minute. Paderborn equalized in the 53rd. Lars Stindel converted a 55th minute penalty for Gladbach with Paderborn going a man down in the 65th. Stindl scored again in the 73rd. Alfredo Morales was on the bench and Zack Steffen wasn't in the squad for Fortuna Dusseldorf's 1-1 home draw with Augsburg. Trailing from the 10th minute, Rouwen Hennings equalized in the 25th. Fortuna enters the final game of the season in 16th-place and can finish no higher than the relegation playoff spot.

"Unfortunately, we didn't have the clear chances on our side to decide the game," Rouwen said. "We have to live with the point. It was a game at eye level for over 90 minutes."

Julian Green's Furth drew 2-2 at Bochum in the 2.Bundesliga. Branimir Hrgota opened the scoring in the 7th minute. Bochum equalized in the 43rd and went ahead in the 52nd. Sebastian Ernst leveled the score in the 79th minute. Bobby Wood wasn't in the squad for Hamburg's 2-1 loss at Heidenheim. Joel Pohjanpalo scored for Hamburg in the 46th with an own-goal making it 1-1 in the 80th minute. Heidenheim scored again five minutes into stoppage time. Terrence Boyd subbed on in the 61st minute for Hallescher in their 2-1 loss at 1860 Munich in the 3.Liga. Trailing from the 8th minute, Anthony Syhre equalized in the 32nd. 1860 went ahead for good in the 50th minute.

Tyler Boyd subbed on in the 69th minute of Besiktas's 5-1 win at Denizlispor. Burak Yilmaz put Besiktas up in the 10th minute with Denizlispor equalizing in the 53rd. Gokhan Gonul put Besiktas up for good in the 60th with Georges-Kevin Nkoudou scoring in the 67th. Adem Ljajic made it 4-1 in the 75th with Abdoulay Diaby finishing off the goals in the 78th. Luis Gil wasn't in the squad for Viktoria Zizkov's 0-0 loss at Slavoj Vysehrad.