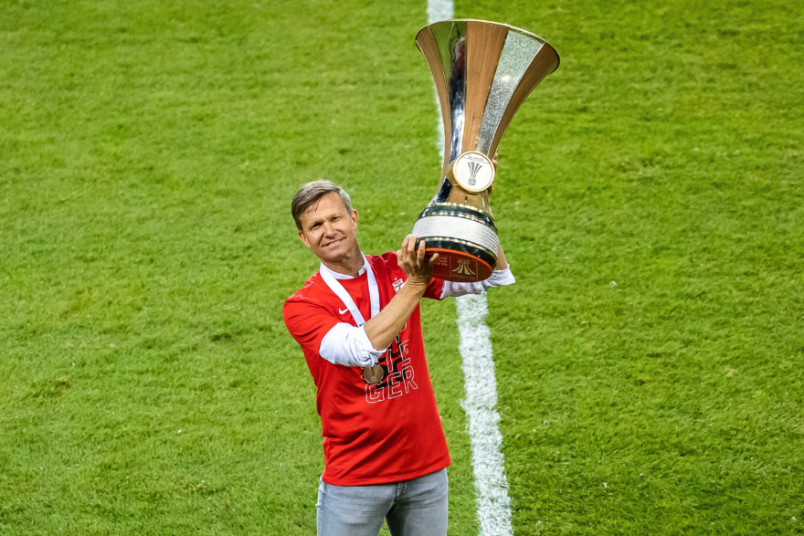 Monday's soccer news starts with Jesse Marsch coaching Red Bull Salzburg to the 2019-20 Austrian Bundesliga title. Marsch's championship represents another accomplishment for American coaching development. Before leaving the New York Red Bulls for an assistant role at RB Leipzig and then the head coaching job at Salzburg, Marsch played and coached exclusively in Major League Soccer and with the USMNT. Seeing his opportunity, Marsch put in the language work to make his move within the Red Bulls organization.

Debuting this season as Red Bull Salzburg's head coach, Marsch took a team into the Champions League. With star striker Erling Haaland, Marsch's team drew plaudits from opponents like eventual Premier League champions Liverpool. They also attracted the rest of Europe's attention, with elite clubs wasting no time in raiding Red Bull Salzburg. Liverpool made a deal for Takumi Minamino. Haaland completed his move to Borussia Dortmund, becoming one of the best strikers in Germany's topflight.

Midway through his first season, Marsch had to regroup with a different club than the one that impressed in the Champions League. While that was still in process, the Austrian Bundesliga and the rest of European soccer came to a halt due to the global pandemic. Navigating that as well, Marsch's Red Bull Salzburg took the Austrian Bundesliga title with two games left to play.

"It is a very special feeling for me," Marsch said. "My job was to win the seventh consecutive title. I have learnt so much over the season, and I am very grateful to the people at this club. Every day provides a chance to improve, and our guys have done this.... I am staying here and have no plans to go! I'm not finished here, there are plenty of challenges waiting for me and the team, and we want to always play in the Champions League."

What Marsch has already proven this season are two things that should raise his reputation around Europe. He's a coach that can motivate elite players to make a good team better. Down 3-0 at Anfield on October 2, his halftime talk in an angry mix of German and English went viral. His team responded, leveling the score at 3-3 in what ended up a 4-3 loss. He's also a coach that can salvage an opportunity. Salzburg dropped to the Europa League, and a markedly different version of the team exited to Eintracht 6-3 on aggregate. That came with an easy excuse for why that could've seen Red Bull giving up points domestically as well.

Austria's Bundesliga plays a split season. After the 22nd round, the top five teams play each other for the title. Red Bull went undefeated through 18 rounds of the regular season, eventually dropping two games. In the Championship round, they went undefeated over eight games, drawing in rounds five and six. Red Bull Salzburg lifted the Austrian Cup on May 29, completing the domestic double in Marsch's first season.

Moving to the soccer news, ESPN's Jeff Carlisle explains what it's like at the hotel and training for MLS is Back. MLS announced on Sunday more positive tests for the coronavirus. SB Nation on positive tests at Cruz Azul. The St Paul Pioneer Press's Andy Greder asks about Minnesota United's approach to player development with young talent leaving for other MLS academies.

DW on Schalke's long winless streak and protests from fans. The NY Times' Tariq Panja profiles Lyon president Jean-Michel Aulas who has taken a leading role in criticizing the decision to shut down Ligue 1's season. The Independent's Miguel Delaney looks at the situation at Leicester City with a Champions League place at stake. The Irish Times' Ken Early questions some of Chelsea manager Frank Lampard's choices.