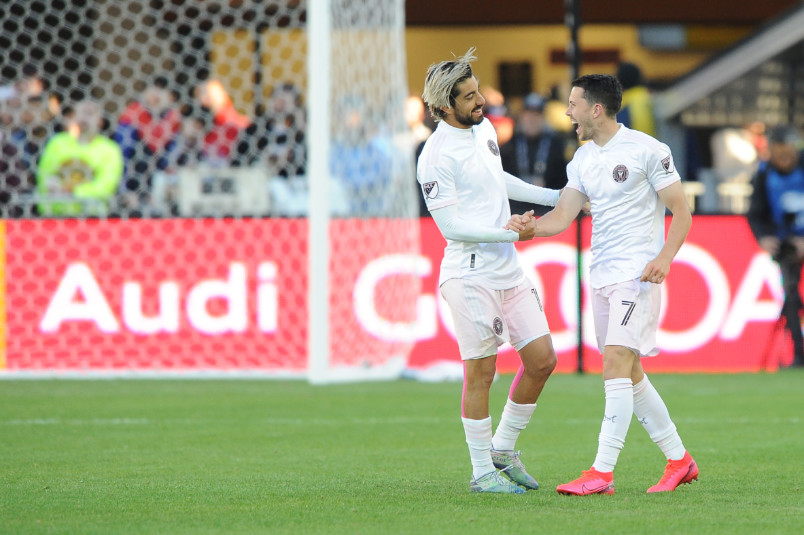 By Jason Davis – WASHINGTON, DC (Jun 19, 2020) US Soccer Players – Barring a last-minute change of plans, Orlando will be the nexus of men’s professional soccer in the United States next month. For six weeks from July 8 until August 11 when Major League Soccer holds its “MLS Is Back” tournament at the Wide World of Sports Complex in Lake Buena Vista, Florida.

The league’s compromise solution for getting back on the field in the aftermath of a three-month coronavirus-mandated shut down won’t benefit any team more than another, at least on paper. Without fans to support them and the familiar surroundings of home venues, all 26 MLS teams will work with the same set of disadvantages. Marking the competitive integrity of the tournament is a strange exercise because there’s no precedent for it.

Two teams might be a little more at home at the Wide World of Sports, however. Two in-state teams, nominal rivals, will have a chance to win their first-ever trophy on Florida soil. Orlando City, the “host” of the tournament with it taking place a few miles from Exploria Stadium, and Inter Miami, the first-year expansion franchise based in Fort Lauderdale that is largely a mystery.

Orlando City and Inter Miami are something of a study in contrast. The Lions aren’t new to MLS but are still in search of the club’s first playoff berth. The club has already churned through four head coaches in five seasons and entered 2020 with a new boss at the helm in Oscar Pareja.

Optimism is a dangerous thing in Orlando. Each of the club’s attempts to refresh its roster and direction has ended in disappointment. The Lions’ bumbled through three different head coaching regimes since joining MLS, but the turnover at that position only tells a small part of the story. The club has also changed the man in charge of its soccer operations three times in five years, with former FC Dallas vice president of soccer operations Luiz Muzzi the latest to captain the ship.

As with every other team in the league heading into the tournament, there’s not much to go on when assessing Orlando’s chances. The Lions opened the season with a goalless draw at home against Real Salt Lake, then fell to a late winner by the Rapids on the road in Colorado.

Two games, one point, one goal scored. In neither match did Orlando have its marquee name, Portuguese DP Nani, who was suspended for the first two games of the year due to transgression in 2019. The club’s top goalscorer, Dom Dwyer, was also missing in action due to injury. It’s nearly impossible to know what the 2020 version of Orlando City brings to the tournament because we haven’t seen the team at full strength.

Orlando turned to veteran Tesho Akindele and a mix of others in attack in the absence of Nani and Dwyer. Pareja played two distinct formations over two games to start the season, utilizing a back four against RSL and a three-man backline against the Rapids. The clean sheet against Real Salt Lake and the near-draw in the thin air of Colorado were small takeaways for fans looking for positives from two games without a win.

Pareja knows how to win in MLS. His record with Colorado and FC Dallas before he left to coach Club Tijuana of Liga MX speaks to his abilities as a coach. The Colombian earned a reputation for trusting young players in Dallas (a culture that continues under Luchi Gonzalez) that he’ll undoubtedly bring to Orlando. There’s an adult in the room in Central Florida, and the club will be better for it.

This tournament, in Orlando City’s backyard, is a different kind of challenge than building into Year One of the new project as originally planned. The Lions might have a small advantage because of their familiarity with the weather, but it’s hard to know how far that will go. The group might have a small psychological advantage because while it will be isolated at the same resort in Lake Buena Vista as the rest of the MLS contingent, the players’ family and friends will be just a short distance away. The team will hope to remain at the facility for the duration of the tournament, meaning a deep run and a chance at a championship, but that small comfort might help with the drain of being “away.”

City returned to full-team training sessions for the first time on Monday. The initial burst of excitement will carry Orlando into July and the coming start of the tournament. There’s plenty of work to do. Unlike some clubs, the Lions don’t yet know what their best lineup playing at Pareja’s direction is capable of.

Inter Miami will travel a few hours north from Fort Lauderdale to take part in MLS Is Back. While Orlando City carries the weight of five MLS seasons of failure with them into the event, Inter will arrive with relatively low expectations and a clean slate.

Everything about Inter Miami is new. Head coach Diego Alonso possesses a strong resume, but without any previous MLS experience. The roster has proven MLS veterans like Luis Robles, Lee Nguyen, Juan Agudelo, and AJ DeLaGarza to name a few. It’s also replete with young players new to the league.

The star of the South Florida show is Rodolfo Pizarro. It’s easy to forget after a long layoff that Pizarro’s transfer was a contentious affair that only became official two weeks before the start of the season. The Mexican playmaker made a mark by scoring the first goal in club history in the second week of the season at DC United, but Inter hit the pandemic shutdown without a point and having never played a game at home.

Progressing deep into the MLS Is Back tournament is complicated for both teams by simple math. Because MLS moved Nashville into the Eastern Conference for the competition and placed Orlando and Miami in a six-team group, reaching the knockout stage will be tougher for the pair. Only the top two in the group are guaranteed to move on. The larger set of teams might mean finishing with more points in 4th-place than some 3rd-place teams in other groups.

MLS chose to pit Orlando and Inter Miami against one another in the tournament opener. That contrived bit of rivalry drama will be the first time the two face off in MLS. The circumstances won’t be ideal, but we’ll get an immediate sense if either of them is ready to take the opportunity presented by the surreal six-week tournament in their home state.