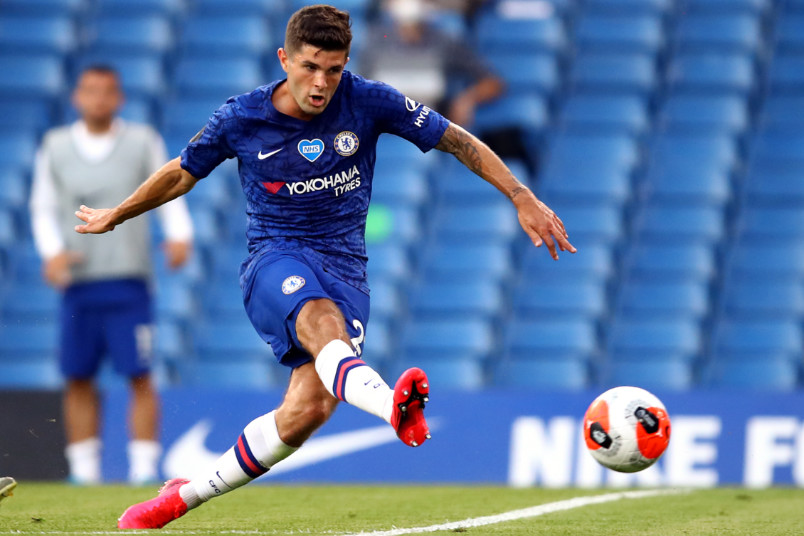 Friday's soccer news starts with Christian Pulisic scoring in Chelsea's 2-1 home win over Manchester City. Pulisic's goal came in the 36th minute off of an individual run. City equalized in the 55th, going a man down in the 77th. Willian converted the ensuing penalty. Pulisic subbed out in stoppage time.

"The most important thing was that we got the three points that we desperately needed today," Pulisic said. "We looked at this game against a big opponent and we wanted to win it. We were at home, obviously in slightly different circumstances, but we’re happy that we came out and got a really good result."

Manchester City's loss sent the title to Liverpool for the first time in 30 years. 23 points now separate Liverpool from 2nd-place City after 31 games.

"There was no alternative," Liverpool manager Jurgen Klopp said of having the team together to watch Chelsea vs Manchester City. "This morning we thought about it, shall we do something and then we thought maybe not compulsory, the boys have to drive a little bit… and then I said, ‘No, we have to make it compulsory, everybody has to be there’ because I am more experienced and I know who will stay at home and watch it alone will regret it for the rest of his life.... It is wonderful to share it, but we share it with everybody out there as well because we are here, they are there, but we are all together. My message is: it is for you out there. It is really for you. I hope you feel it. I hope you saw it last night, not only last night but after a long time, last night again. It is for so many people."

SI.com's Jonathan Wilson on title number 19 for Liverpool. The Independent's Miguel Delaney with how long it took Liverpool between league titles. The NY Times' Rory Smith has the circumstances of what became a unique title season The Telegraph's Chris Bascombe focuses on how Klopp rebuilt Liverpool. DW's Jonathan Harding considers Klopp's run at Liverpool from Borussia Dortmund's perspective.

Also in the soccer news, FIFA officially announced that only UEFA and CONMEBOL will play during the September international window. Concacaf will wait until October and has yet to announce a format for conducting World Cup qualifying. In a statement, Concacaf said, "The challenges presented by postponements to the football calendar, and the incomplete FIFA rankings cycle in our confederation, means our current World Cup Qualifying process has been compromised and will be changed. We will now work with the new framework provided and liaise with FIFA to finalize a new World Cup Qualification format for the Concacaf region."