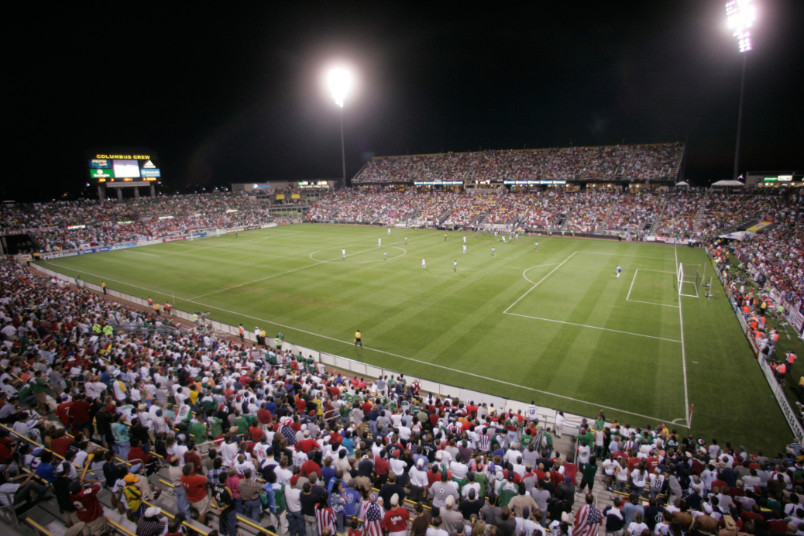 By Clemente Lisi – NEW YORK, NY (Jun 29, 2020) US Soccer Players – The growth of MLS over its 25 years of existence has depended in large part on the stadiums the teams call home. In the league’s inaugural season in 1996, all 10 MLS teams played in large football stadiums. With MLS averaging 17,000 fans that season, stadiums looked mostly empty on television and offered very little in terms of amenities for soccer fans.

Fast forward two decades later, and the situation couldn’t be more different. In 1999, the Columbus Crew, owned by the Hunt family, built the country’s first soccer-specific stadium of the modern era. With a smaller capacity of 20,000 spectators, the plan was to highlight MLS games in an appropriate setting. The stadium allowed for the team to control its schedule, a first for the league.

The venue’s intimidating setting and less than ideal protection from the weather also helped foster the US fan culture around soccer that we see today. That went a long way in helping the game grow and draw in new fans. No longer was soccer relegated to cavernous stadiums. There are currently 19 MLS teams out of 26 with stadiums built for soccer.

On the other hand, the Seattle Sounders and Atlanta United are outliers. Both draw very large crowds at NFL stadiums in what has become two of the strongest soccer markets in the country over the past few years. Last season, Atlanta topped the league with an average of 52,510 fans in a 72,000 capacity stadium. Seattle was second with 40,247 in a venue that holds 69,000.

What is the current state of MLS stadiums? Ahead of what MLS hopes to be a return to home games later this year, here are what some of the stadiums currently in use say about the league.

Best of the best

MLS has made it mandatory for expansion teams to have a soccer-specific stadium. That means lots of new stadiums to visit in the coming years. For now, the venues that stand out most for me are Banc of California Stadium in Los Angeles and Audi Field in Washington, DC. Both were built in 2018 and represent exactly what the league wants in its new stadiums.

Both provide a great soccer atmosphere. They’re in central locations that are easy to get to with plenty of fun activities in the surrounding areas for fans. Every seat at Banc of California Stadium is within 135 feet of the field with the closest just 12 feet away. At Audi Field, every seat has a cupholder with the stands shaded from sunlight.

Time hasn’t been kind to Crew Stadium, now known as MAPFRE Stadium. The template for all stadiums the league uses now, MAPFRE Stadium is an example of how short of a shelf life sports venues can have these days. Once the Crew committed to staying in Columbus, the team announced the plans for a replacement.

That said, the stadium’s place in American soccer history is locked. Aside from Crew matches, it has long provided a home-field advantage for the USMNT during World Cup Qualifying. It’s still a quickly built venue in a place that has more parking lots than amenities. The proposed new stadium will address all those issues.

Seattle and Atlanta make playing in NFL stadiums so appealing that Chicago gave up on soccer-specificity to return to Soldier Field. Leaving Bridgeview, their home since 2006, the Fire now have the difference between a 20k soccer-specific facility and a 61,500 NFL venue to fill in the best situation. It’s a significant ask of a market that has rarely shown a willingness to show up in numbers for a regular season MLS game.

The New England Revolution have hinted in moving in the opposite direction, finally leaving Gillette Stadium for a soccer-specific venue ideally located in Boston. It’s easy to overlook Vancouver playing in BC Place in part because of how that venue lends itself to reducing capacity. Still, the Whitecaps aren’t a team playing to reduced capacity sellouts.

Colorado and Dallas built stadiums as answers to attendance problems. Now, both raise the same suburban question we’ve seen in other markets and multiple sports. Frisco isn’t Dallas and Commerce City isn’t Denver, something that becomes clear when the attendance lags in both markets.

Dallas is the older of the two, opening in 2005 and now the home of the National Soccer Hall of Fame at one end of the stadium. With US Youth Soccer’s headquarters in the parking lot, it’s tough to think of FC Dallas moving anywhere else. Still, they’ve never figured out the attendance issue that sent them from the Cotton Bowl to a high school stadium and, ultimately, the northern suburbs. Colorado also has an attendance issue in Commerce City since opening in 2007, with the proposed Victory Crossing mixed-use development still a work in progress.

In need of a stadium

If any team needed a home to call their own its New York City FC. While the team plays at Yankee Stadium, this temporary home has been anything but since the team first entered the league five years ago. It’s also a problem anytime there’s a scheduling conflict. NYCFC has had to play a state away in Connecticut and more disconcertingly at the home of their city rivals Red Bull Arena in New Jersey. That highlights the old primary tenant problem the league thought it had left behind.

After years of debate and frustration, the team has a plan to build a 25,000-seat stadium as part of a development project costing more than $1 billion near Yankee Stadium. If that plan goes ahead, the new stadium would answer what might be the biggest venue problem in MLS.