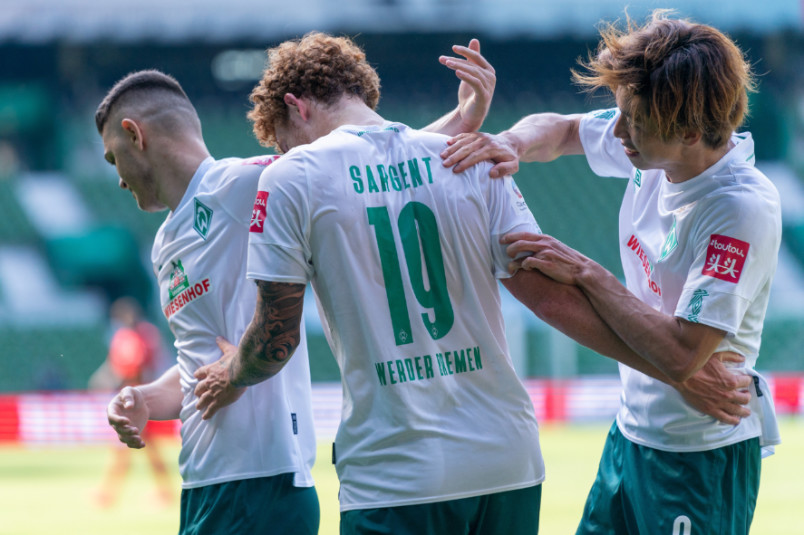 The roundup of USMNT players in Europe starts with the conclusion of the 2019-20 Bundesliga season. The biggest news for USMNT fans was Josh Sargent's Werder Bremen jumping ahead of Alfredo Morales and Zack Steffen's Fortuna Dusseldorf for 16th-place and the relegation playoff spot.

Werder Bremen started the final matchday in 17th-place, two points behind Fortuna Dusseldorf. Sargent scored in their 6-1 home win over Cologne. Yuya Osako put Werder up in the 22nd minute with Milot Rashica doubling the lead in the 27th and Nicklas Fullkrug making it 3-0 in the 29th. Davy Klaassen extended the lead to five in the 55th minute. Cologne pulled a goal back in the 62nd with Sargent scoring in the 68th minute.

"We have Union Berlin to thank," Fullkrug said. "It's incredible that they put in such a great effort on the final day. Perhaps we should send them a crate of beer… We're really, really happy today. It's back in our own hands again."

Morales subbed on in the 62nd minute of Fortuna Dusseldorf's 3-0 loss at Union Berlin, relegating Fortuna in 17th-place. Union Berlin scored in the 26th, 54th, and 90th minutes. Steffen wasn't in the squad for Fortuna.

"I'm sorry for our fans and the club," Fortuna coach Uwe Rosler said. "We fought week after week and in the end we didn't manage to get it across the line. We always played at the limit, but often didn't reward ourselves. Today we are behind due to a standard situation. Then we became restless. The second goal then kills us. We didn't take advantage of the opportunities we had at the front. I sympathize with my players. In the locker room I said to them that I am proud of them because they gave everything. In the end it was not enough."

Also in the Bundesliga, Tyler Adams subbed out in the 87th minute of RB Leipzig's 2-1 win at Augsburg to finish 3rd. Timo Werner put Leipzig up in the 28th minute with Augsburg equalizing in the 71st. Werner scored again in the 80th. Fabian Johnson wasn't in the squad for Gladbach's 2-1 win at Hertha BSC. Jonas Hofmann put Gladbach up in the 7th minute with Breel Embolo doubling the lead in the 78th. Hertha scored in stoppage time. Gladbach finishes in 4th-place, taking the final Champions League spot.

John Brooks subbed out in the 74th minute of Wolfsburg's 4-0 home loss to Bayern. Wolfsburg finishes 7th. Timmy Chandler was on the bench for Eintracht's 3-2 home win over Paderborn to finish 9th. Sebastian Rode scored in the 9th minute with Andre Silva adding a goal in the 32nd and Bas Dost making it 3-0 in the 52nd. Paderborn scored in the 55th and 75th minutes. Weston McKennie's Schalke lost 4-0 at Freiburg to finish 12th.

Julian Green subbed out int he 59th minute of Furth's 2-1 home loss to Karlsruher in the 2.Bundesliga. Saniel Keita-Ruel scored for Furth two minutes into the game with Karlsruher equalizing in the 21st and converting a 61st minute penalty. Furth finished 9th.

Bobby Wood wasn't in the squad for Hamburg's 5-1 home loss to Sandhausen. Down 2-0 from the 21st minute, Aaron Hunt converted a 62nd minute penalty. Sandhausen added goals in the 84th, 88th, and stoppage time. Hamburg finished 4th, missing the promotion playoff spot by a point. Terrence Boyd subbed out in stoppage time in Hallescher's 2-2 draw at Duisburg in the 3.Liga. Anthony Syhre scored for Hallescher in the 25th and 32nd minutes with Duisburg scoring in the 35th and 76th.

Moving to the FA Cup, a 63rd minute Ross Barkley goal was the difference in Chelsea's 1-0 win at Leicester City. Christian Pulisic subbed out in the 72nd minute. DeAndre Yedlin subbed on in the 74th minute for Newcastle in their 2-0 home loss to Manchester City. Newcastle fell behind to a 37th minute penalty with City scoring again in the 68th.

Geoff Cameron subbed out in the 71st minute of QPR's 1-0 loss at Charlton Athletic in the Championship. The game's only goal came in the 12th minute. QPR announced that Cameron is staying with the club for the 2020-21 season. Tim Ream's Fulham lost 3-0 at Leeds United to goals in the 10th, 56th, and 71st minutes. Fulham's Neeskens Kebano saw red in stoppage time. Luca De La Torre wasn't in the squad for Fulham.

Antonee Robinson's Wigan Athletic beat Blackburn 2-0 at home. Lee Evans scored in the 80th with Michael Jacobs getting a goal four minutes into stoppage time. Duane Holmes wasn't in the squad for Derby County's 2-1 home win over Matt Miazga's Reading. Derby went up through Tom Lawrence in the 44th minute with Wayne Rooney converting a penalty in first-half stoppage time. Andy Rinomhota pulled a goal back for Reading in the 62nd. Miazga was involved in an altercation with Derby's Tom Lawrence at the end of the game, with both players shown red cards. Cameron Carter-Vickers's Luton Town won 1-0 at Swansea City. James Collins scored in the 72nd minute with Luton Town going a man up in the 83rd.

Aron Johannsson wasn't in the squad for Hammarby's 2-1 loss at Mjallby. Muamer Tankovic put Hammarby up in the 2nd minute, but a red card to Richard Magyar had them a man down from the 26th. Mjallby scored in the 88th and four minutes into stoppage time. Jonathan Amon missed Nordsjaelland's 4-0 win at AAB. Mikkel Damsgaard scored in the 34th and 37th minutes with Mohammed Kudos scoring in the 51st and 58th.

Tyler Boyd subbed on in the 70th minute of Besiktas's 3-0 home win over Konyaspor. Besiktas went a man up in the 15th minute with Burak Yilmaz scoring in the 40th. Abdoulay Diaby made it 2-0 in first-half stoppage time with Jeremain Lens adding a goal in the 52nd. Boyd saw yellow in the 87th minute.

Luis Gil wasn't in the squad for Viktoria Zizkov's 6-1 loss at Zbrojovka Brno. With the score 3-0 from a 23rd minute penalty, Igor Sukenik scored for Zizkov in the 30th. Zbrojovka Brno added goals in the 42nd, 56th, and 80th minutes. Shaq Moore's Tenerife won 2-0 at Cadiz. Going a man up in the 22nd minute, Dani Gomez scored in the 45th and 47th.

Monday's games saw Mix Diskerud subbing out in the 82nd minute of Helsingborg's 1-0 loss at BK Hacken. The game's only goal came in the 60th minute. Andrija Novakovich's Frosinone lost 2-0 at Chievo Verona in Serie B. Chievo went ahead in the 54th and scored again a minute later.