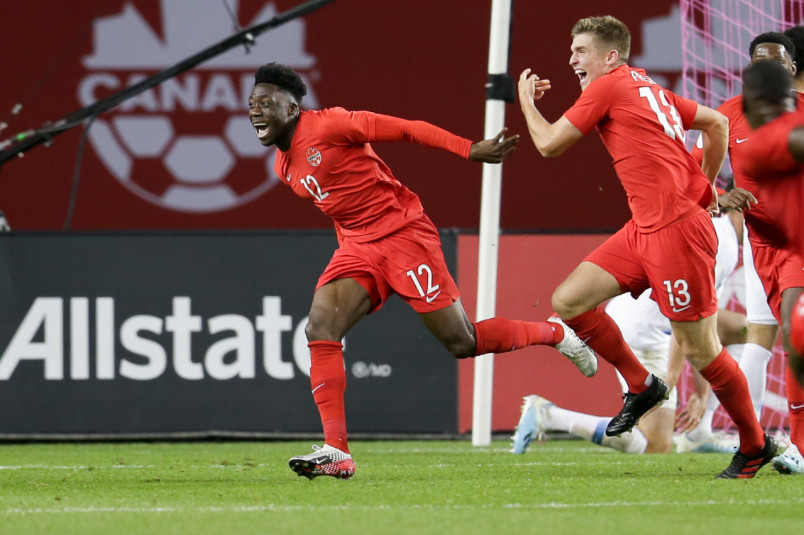 By Jason Davis – WASHINGTON, DC (Jun 10, 2020) US Soccer Players – It’s an incredible story. A teenager, from a family of immigrants, emerges from a lesser soccer nation to take the world by storm with his exploits for one of the most famous clubs on the planet. With his combination of awesome athleticism and soccer intelligence, he rockets to stardom in the crucible of an intense, elite competition. Justifiably, this budding superstar becomes an example of what his home nation can accomplish if the investment in developing meets the potential of latent talent.

This is not an American story. The player currently burning up the elite competition is Canada’s Alphonso Davies of Bayern Munich.

It isn’t easy to overstate just what Davies means to Canadian soccer. Despite his youth, Davies seems comfortable in one of the most talent-rich teams in the world. Bayern Munich’s reach is immeasurable. For a perennial Champions League contender to place a Canadian teenager into its starting lineup, and for that player to thrive is a transformative happening for soccer north of the border.

Canadian soccer fans, bursting with pride, are leveraging Davies’s success for all its worth. Heated online debates about the best player from Concacaf used to center around Christian Pulisic, Mexicans Raul Jimenez and Hirving Lozano, and occasionally Costa Rican goalkeeper Keylor Navas. They now include a 19-year old from Edmonton.

While Davies’s arrival in Germany feels like a breakthrough for Canadian soccer, the Vancouver Whitecaps product is not even the first talented young Canadian-born player to join Bayern Munich. Davies isn’t even the first Canadian player to come out of Alberta to land at the German powerhouse.

Twenty years ago, a Canadian talent left Calgary for Bayern Munich. Owen Hargreaves, the son of a former professional player relocated to Alberta, moved to Germany as a teenager, and worked his way through Bayern Munich’s system. He made his first-team debut as a 19-year-old in 2000 and made 145 appearances for the club over the next seven years.

Hargreaves might have been the shining light that could pull Canadian soccer forward, except for options his lineage presented him. The midfielder had a Welsh mother and an English father. Rather than suit up for the country where he grew up, he initially opted for Wales as a youth player before switching to England. He earned that nation’s player of the tournament at the 2006 World Cup.

By that point, Hargreaves was no longer Canadian, at least not in terms of his soccer career. Whatever hard feelings Canadian fans might have had about Hargreaves’s decision to play for the nation of his father over the nation of his birth, one player wasn’t going to be enough to get Canada back to the World Cup.

Americans can certainly sympathize with their Canadian neighbors over a talent good enough for a top European club opting to represent another country. Giuseppe Rossi’s decision to play for Italy cost the USMNT a talent. It’s just a coincidence that injuries limited both Rossi and Hargreaves. It’s no coincidence that both Canada and the United States waited years to see another young talent breakthrough in Europe and turn out for their respective national teams. Neither nation possesses the kind of soccer culture that produces those talents in big numbers.

European clubs found an inefficiency in the market in North America and are now taking advantage. Pulisic’s rise at Dortmund proved there’s top-tier talent in the United States. His leading role for the USMNT and big money move to Chelsea proved what Americans can do. Even if Pulisic is a once-in-a-generation player from a country that still has a long way to go, his existence raises the bar for American soccer. There had to be a first Pulisic for American soccer to produce the “next Pulisic.”

The same thing is happening in Canada. Davies is single-handedly lifting the reputation of Canada among soccer fans around the world. Though Canada does have other talented young players, Jonathan David chief among them, it’s Davies that is already making waves as a club marching towards a championship in one of the best leagues on the planet. His constant run among the top performers in Bayern Munich’s return from the pandemic shutdown is earning him headlines every week.

One of those headlines stems from Davies’s rising transfer value. According to the CIES Football Observatory most recent rankings, Davies is the ninth most expensive player in Europe with an estimated value of over $150m dollars. If that number seems crazy, that’s because it is. The number is just window dressing. The important part is Davies’s inclusion in the list.

Davies is redefining what’s possible for a Canadian player, a player developed by MLS, and depending on how far we can stretch his impact, players from North American nations where soccer is often an afterthought.

American soccer fans must reckon with an emboldened Canada after decades of presuming superiority in the men’s game. The Canadian national team is still a step or two short of truly challenging for a return to the World Cup, but the amount of talent coming through the program gives the nation plenty of reason to hope.

Meanwhile, the United States is rebuilding following the failure to qualify for the 2018 World Cup in Russia. Though the USMNT has a group of talented young players coming through, there’s still plenty of reason to worry. The cancellation of international dates due to global Coronavius pandemic leaves a vacuum unfilled. As long as the Americans are unable to show improvement on the field, there will be doubt about the campaign for 2022.

Beyond the fortunes of the national teams, Davies’s incredible rise to prominence in Germany, a rise aided by the fact that the Bundesliga returned to play before other high-profile leagues, brings into focus that it’s not just America that is now capable of finding diamonds among the young players learning the game within its borders. Davies’ contribution to his country will go well beyond what he does for the national team.

Davies already means more to Canadian soccer than Pulisic does to the American game. That’s partly down to the greater success of the USMNT, but it also speaks to Davies’s talent and story. The best player in Concacaf could be from Canada, where it might just mean more.