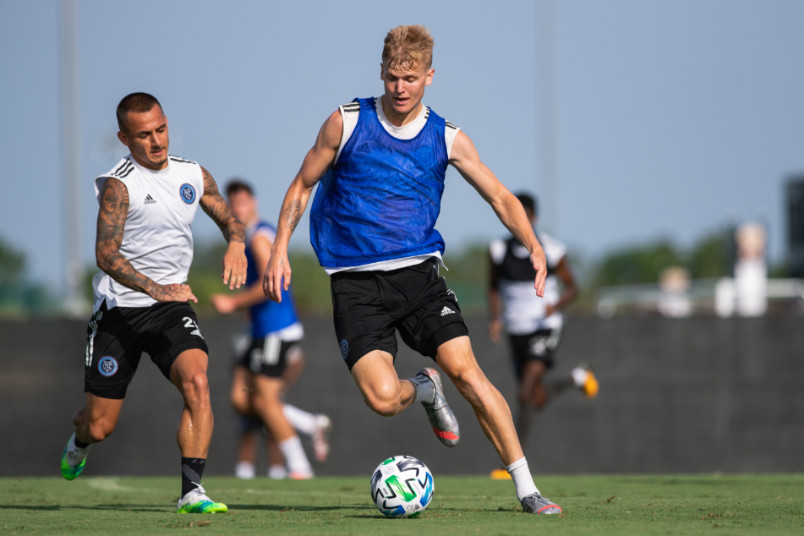 By Clemente Lisi – NEW YORK, NY (Jul 6, 2020) US Soccer Players – Major League Soccer is finally back. That’s a phrase American fans have wanted to hear for months. The return of soccer becomes a reality on Wednesday with what the league is helpfully calling the MLS is Back Tournament. While the other major sports have yet to return to play, pro soccer is embracing its role as a trailblazer in safely trying to get sports back after months of inactivity.

Soccer has returned in Europe over the last few weeks. The Bundesliga was the first to return to action, followed by Serie A, La Liga, and the Premier League. The domestic season, now scheduled to conclude this month, will culminate with the Champions League taking over the entire month of August. All these leagues have put into place restrictions to help stem the spread of coronavirus, most notably having games with no spectators.

It’s a similar situation with the MLS is Back Tournament that will run through August 11. It will also feature no fans, adding a central location to reduce the potential spread of the pandemic. Despite the increase of COVID-19 cases in Florida over the past two weeks, that shared location is meant to shield the players from getting the virus. In announcing the tournament last month, commissioner Don Garber said the “controlled environment enables us to help protect the health of our players, coaches and staff as we return to play.”

Clubs returned to individual training on May 6, but players, coaches, and staff will have had to take two tests in order to be eligible to participate. The aim is to prevent any spread of the virus, meaning players and staff will have to wear masks on the sidelines like we’ve seen with the NWSL tournament. With the players slowly returning back into form and safety precautions in place, here are five storylines to watch for starting this Wednesday in Florida.

Whether MLS can keep everyone safely cocooned from the virus is something sports leagues across the country will be keenly watching. In order to make sure everyone stays healthy for the duration of the tournament, players, coaches and officials on the sidelines will wear masks and practice social distancing. On the field, players will not shake hands before games or exchange jerseys at the final whistle. UPDATE: MLS announced that it had removed FC Dallas from the tournament based on too many positive tests.

Will the heat or Orlando impact teams?

The tournament opens with a doubleheader on Wednesday night. Orlando City SC takes on Inter Miami at 8pm ET, followed by Nashville SC versus the Chicago Fire at 10:30pm ET. Add 9am to the three time slots the league is using. That’s to limit the exposure to the high temperatures and humidity common in Orlando this time of year. The average high is 92 degrees, something that undoubtedly will matter even when avoiding the hottest part of the day. That may raise an obvious issue. Why didn’t MLS opt for a more temperate site to hold the tournament? The US isn’t short of massive soccer facilities, some of them owned or controlled by MLS teams.

How does the tournament impact the regular season?

The tournament will feature a World Cup-style group stage with teams divided into five groups of four and one group of six with a bracket elimination round. During the group stage, the MLS is Back Tournament works like the regular season. The results from each team’s three matches will count toward the 2020 standings. The aim is to return to the MLS regular season sometime in August. During the knockout stage, games will not count towards the regular-season totals. The tournament winner will earn an automatic berth to the 2021 Concacaf Champions League. Players will also be eligible for a bonus from a $1.1 million prize pool.

Who are the tournament MVP candidates?

Not playing competitive matches since March could radically alter the performances of even the best players in the league. It’s a unique set of circumstances that could see new candidates emerge. Reports have the reigning MVP Carlos Vela opting out of the tournament due to his wife’s pregnancy. That partially opens up the field, but it’s still easy to pencil in some obvious names. Atlanta United’s Josef Martinez leads that list. It’s common sense that the MVP will hail from one of the teams at least making the final. That would require a surprise run centered around that surprise candidate. It would be interesting if that spotlight focuses on rookies and lesser-known players like the Fire’s Ignacio Aliesda or the Los Angeles Galaxy’s Cristian Pavon.

Will Seattle add another trophy?

This is the big question heading into the tournament. Does last season and the early returns back in March mean anything? Defending MLS Cup champion Seattle has proven that it can do well in tournament formats and knockout rounds. Definitely count them as the favorite. Who else? Talent-stacked LAFC and NYCFC are up there. The Galaxy could be a dark horse with Chicharito Hernandez looking to make his mark but without Jonathan Dos Santos due to injury. The five subs rule favors deep squads, but it’s still an open question what any of these teams look like once the tournament starts.