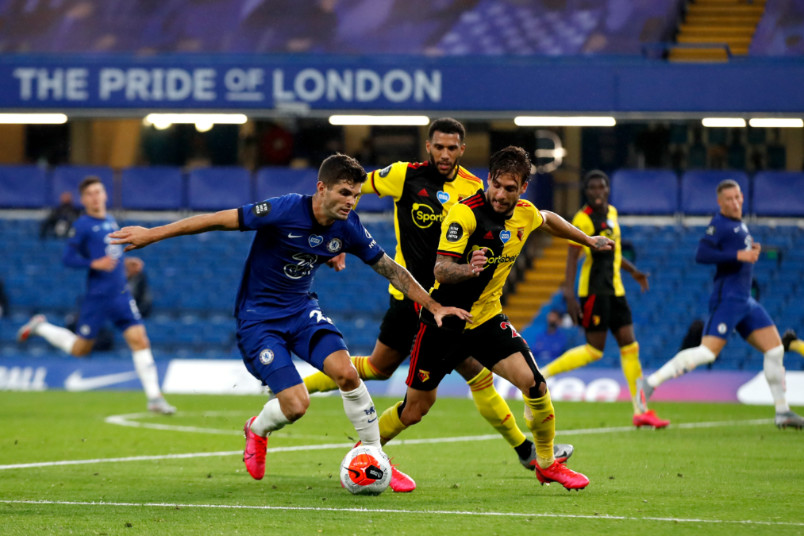 Monday’s soccer news starts with the roundup of USMNT players in Europe starts in the Premier League. Christian Pulisic’s Chelsea shutout Watford 3-0 at home. Olivier Giroud opened the scoring in the 28th minute with Willian converting a 43rd minute penalty set up by Pulisic. Ross Barkley scored in stoppage time.

“I feel really confident in my game right now,” Pulisic said. “I’m happy I can be on the field helping my team. I’m just going to continue and keep my confidence high.”

DeAndre Yedlin was on the bench for Newcastle United’s 2-2 home draw with West Ham. Trailing from the 4th minute, Miguel Almiron equalized for Newcastle in the 17th. Newcastle fell behind again in the 65th with Jonjo Shelvey equalizing in the 67th minute.

In the Championship, Duane Holmes subbed out in the 66th minute of Derby County’s 1-1 home draw with Nottingham Forest. Derby fell behind in the 12th minute, going a man down with a red card to Martyn Waghorn four minutes into stoppage time. Chris Martin equalized three minutes later.

“I think we deserved the point,” Derby County manager Phillip Cocu said. “I always say to the players to stay in the game and push until the last second. I always want my team to have this mentality and character. We have got a few equalizers and a few late winners, so it confirms that you have to keep believing in scoring a goal in the dying seconds of the game. It was an important draw today and now we have to see what kind of result we can get on Wednesday at West Bromwich Albion. If it is a positive result then this point can be very important.”

Cameron Carter-Vickers’s Luton Town lost 5-0 at home to Reading. Yakou Meite scored in the 17th, 18th, 35th, and 62nd minutes. Reading’s other goal came from George Puscas in the 57th. Matt Miazga wasn’t in the squad for Reading.

Shaq Moore’s Tenerife won 2-1 at Almeria in the Segunda Division. Trailing from the 37th minute, Luis Milla equalized from the penalty spot in the 37th. Going a man up in the 90th, Alex Bermejo scored Tenerife’s winner two minutes into stoppage time. Andrija Novakovich subbed out in the 77th minute of Frosinone’s 2-1 home win over Spezia in Serie B. Alessandro Salvi put Frosinone up in the 14th minute with Spezia equalizing from the penalty spot in the 50th. Luca Paganini scored Frosinone’s winner in the 85th.

Also in the soccer news, MLSsoccer’s Charles Boehm talks to Real Salt Lake midfielder Kyle Beckerman about his lengthy MLS career. The LA Times’ Kevin Baxter with the issues for broadcasting MLS is Back when it’s not in regular stadiums. ESPN’s Jeff Carlisle on players in the bubble. The Orlando Sentinel’s Iliana Limon Romero reports on MLS rescheduling more MLS is Back games.

🇧🇷 Ronaldo: “I could suffer anything as long as I could play football again. I not only played football, I breathed football.”#UCL | #MondayMotivation | @Ronaldo pic.twitter.com/3b9XxJVxPa