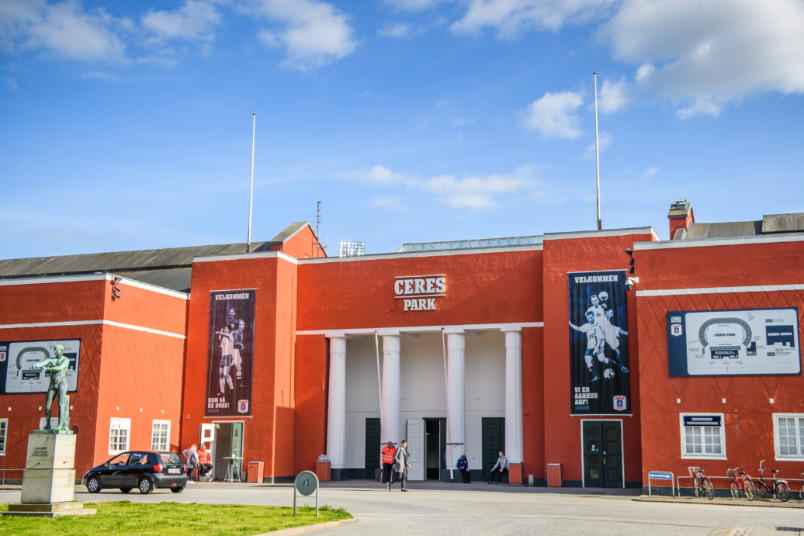 By J Hutcherson (Jul 7, 2020) US Soccer Players – Since streaming services have decided the best way to differentiate themselves is to offer anything they can find, it’s not exactly abnormal that the Danish league is available on ESPN+. It was easy to spot what was different with Saturday’s AGF vs Copenhagen game. Danish authorities eased restrictions on crowds, allowing over 7,000 into Ceres Park, a venue that can hold just under 20,000 fans. As the commentators regularly reminded us, we were watching the return of fans in European soccer.

The obvious question for American sports fans is why now? The Danish league is nearing its end with the final round set for July 26. Since returning last month, it’s faced the same issues as the rest of Europe. Closed doors and the feeling that the point of resuming is simple. Get the games in as fairly and as quickly as possible. Denmark added another item to that list, playing games in front of supporters now rather than waiting for next season.

It started with the tiny crowd allowed into the Danish Cup final on July 1. Authorities limited that game to 1750 fans, and it didn’t work. With some fans refusing to social distance, the game came to a halt. It didn’t resume until those fans were no longer inside the stadium. That didn’t bring the entire concept to a halt. Instead, it was the Superliga’s turn to show whether or not allowing supporters in every other seat is safe.

“Yesterday there were two visiting teams in a third of the stadium, while the test matches and the upcoming matches in the 3F Superliga are played at the club’s own stadiums with their own stewards and own security protocols, and no away fans for the matches,” Copenhagen director Lars Bo Jeppesen said the day after the Danish Cup final. I’m not saying that to trivialize what happened this week, but the specific episodes I do not want to go into. It is not time to point fingers at anyone, but instead to have football in Denmark standing together and solving these issues in a responsible way.”

AGF considered the first game with fans a success, calling it a step as they work through what will become best practices. The club produced a video of the atmosphere even an extremely limited crowd creates, something they credited with the win over Copenhagen. In other words, another step towards normal.

Like with the Bundesliga restart, we already know how this should work. One league takes the relative risk of reopening, shows it can work, and others follow. Now that one league has taken the relative risk of allowing fans, the expectation is that others will follow. France, of all places, could be the higher profile example. The only major European league not to resume, France is now considering limited crowds for the two cup finals later this month. The French government put a 5,000 limit on both games that the French Federation is reportedly trying to negotiate upwards.

France was already in the position to allow fans for the Coupe de France and Coupe de Ligue before Denmark reopened stadiums. Still, they now have a better understanding of how this does and doesn’t work. The Danish Cup showed how it could go wrong. The Superliga showed how it could work. While Danish authorities would have certainly preferred two clear examples of their plans working, what happened during the Cup final is important. The authorities recognized the problem, dealt with it, and 14 minutes later the game resumed.

Should Denmark and France show this is a safe way of getting fans into stadiums, the assumption is that other leagues will follow. That won’t be the major domestic leagues currently finishing out their seasons, but there is another potential proof of concept. UEFA has yet to announce whether or not they plan to allow a limited number of fans into the stadiums for the conclusion of the Champions League and Europa League next month.

“If I would answer today, then we don’t think we can have spectators at the Europa League and Champions League quarterfinals, semifinals and finals,” UEFA president Aleksander Ceferin said in a June 17 press conference. “But things are changing. Theoretically, a month ago I couldn’t even answer if we could play the competition. Now we will play it, hopefully. “We haven’t decided yet about no spectators or spectators because we will assess the situation at the beginning of July and then we will see what the situation will be.”

Should UEFA allow fans at the Champions League in Lisbon and the Europa League in Cologne, it sends a message across Europe. The Champions League concludes on August 28 with the 2021-22 seasons starting just a few weeks later. If UEFA can successfully stage its games with a limited number of fans, it’s the next step to limited numbers of fans becoming the norm across European soccer. From there, it’s increasing towards capacity.

All of this should sound borderline ridiculous to American sports fans, but that’s a clear indication of how different the situations are in Europe and the US. American sports are struggling due to the larger pandemic issues, a situation that isn’t stable in enough parts of the country to create serious issues. That includes the greater Orlando area where MLS remains on course to play games that count starting on Wednesday evening. Getting there has been problematic with positive tests and the league removing FC Dallas from the tournament.

MLS is Back is a neutral site solution that the NBA and the NHL plan to follow. Except those leagues are looking at weeks turning into months of a quarantine bubble. Should the MLS experiment work, the next step is playing the schedule at its regular venues. Both of those are steps into the unknown. Yes, the women’s league has shown a bubble tournament format is feasible, but not with 25 teams. Yes, the USL-Championship is pushing ahead with home games and fans in some stadiums, but it’s a sizeable risk that may not mean much for MLS and the major North American sports leagues.

What we’re seeing in Europe remain hesitant steps with a willingness to pull back when necessary. It’s a process, with leagues successfully taking step one and now watching for examples of step two proving safe. The North American leagues should be watching as well, to a point.

There’s no direct connection between individual leagues covering relatively small geographic areas in Europe compared to the massive size of North America. What will eventually be a potential proof of concept for this country is reestablishing the European competitions. UEFA is what’s most important to American pro sports, showing that it’s possible to run games across a broad geography with fans in attendance and do it safely. That’s the major move to get back to normal. It starts with the Champions League and will continue with UEFA nations playing in the September international window. All of this required the Bundesliga and now the Superliga taking what they believe to be manageable risks.