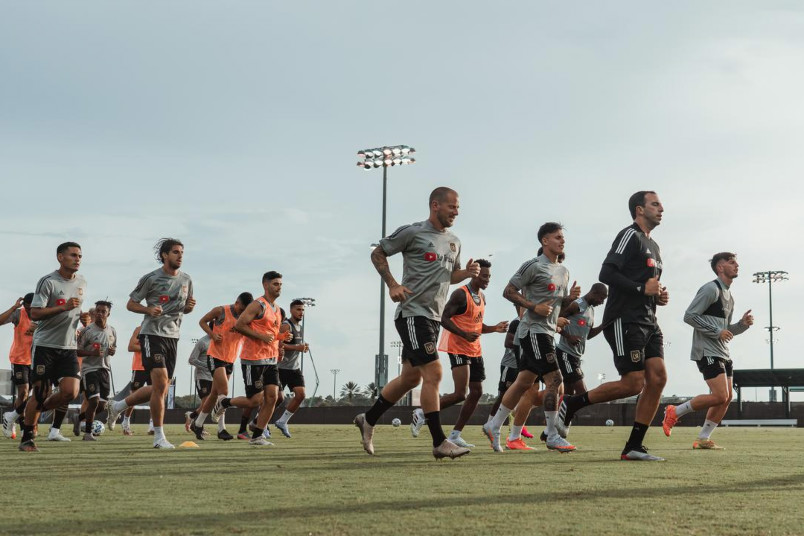 By Luis Bueno – RIVERSIDE, CA (Jul 15, 2020) US Soccer Players – As the MLS Is Back tournament marches on, one of the most-anticipated matches is just days away. The LA Galaxy and LAFC will renew hostilities when the two play their group match on Saturday. The tournament’s supposed blind draw set up this matchup. Because of that, we get at least one LA Galaxy vs LAFC meeting in 2020.

The last time the teams met was October 24 during the 2019 MLS Cup playoffs. For that match, which LAFC won, there was no question that both sides fully embraced the rivalry.

This time around, however, there will be no fans in person. No supporters groups chanting and jumping throughout the match. No reminder to the rest of the league that this rivalry already lives up to the hype.

For this rivalry match to look like a rivalry match, the players must show it. The genuine dislike needs to be on clear display. It’s how the players carry themselves, the extra physicality, and the celebration when things go well.

All six of the previous LAFC vs LA Galaxy matchups have featured great moments and quite a bit of drama. The Galaxy has two wins to LAFC’s one, but the only matchup decided by more than one goal was the playoff meeting.

The last meeting really cemented this into a true rivalry. LAFC could have been in real danger by losing the playoff match. Psychologically the team had a disadvantage because none of the first five meetings had gone their way. A Galaxy win would’ve overshadowed LAFC’s ridiculous regular season. LAFC simply couldn’t afford to lose to a middling team that also happened to be their city rivals.

LAFC clapped back, claimed victory, and advanced to the Western Conference final. Even though LAFC lost to eventual champions Seattle, beating the Galaxy was a highlight of the campaign.

In a season that didn’t have to navigate a pandemic, we would already know how this partly played out. The two teams were on the schedule for May 16 at Banc of California Stadium with the return leg set for August 23. Those would have been great fixtures. They were equally spread out across the season which would have helped build up anticipation for them and given a more accurate read on each team. If one side dominated both matches, it takes away the excuses.

The Galaxy should have been able to get through its early transition from the Ibrahimovic era to the Chicharito one. If things were going to work well for the Galaxy this season, it would have been evident by May. Come August, the teams would either have been pushing for Western Conference supremacy or circling the drain, and the match would have reflected as such.

Instead, we get one guaranteed meeting between the teams this year. All of the focus has been on getting through this MLS Is Back tournament. There isn’t much vision right now beyond that. If the league goes back to playing matches regularly then there should be at least one more LA derby match, but it is up in the air what the rest of the season will look like once this tournament finishes next month. It is possible the league puts together an entirely new schedule for the remainder of the season. Even with the league’s love of rivalry weeks, there’s no guarantee of another LA derby in 2020.

That much uncertainty puts more of an emphasis on this match. A poor result for the Galaxy would sting, but it would not cause such a drastic change like the previous one did. The playoff loss was the culmination of a poor campaign, triggering changes at the club. The team got rid of several players from that match, four of the starters and two of the three substitutes. The Galaxy quickly pivoted and welcomed Javier “Chicharito” Hernandez to the club.

Even with Chicharito’s arrival and a lot of new faces on defense, the team is still suffering through the early stages of the season. The Galaxy has one draw and two losses going into the LA derby. The loss against Portland on Monday exposed the team’s porous defending more than anything. The Galaxy’s inability to finish also hampered the club. Hernandez missed a penalty kick early in the match and had two more failed opportunities to score. Late in the match, he finally broke through for his first MLS goal with Portland already leading comfortably 2-0.

LAFC meanwhile appear to be in better shape even without Carlos Vela. who skipped the tournament due to health concerns over Covid-19. The club did answer questions regarding who would score goals without Vela. Newcomer Bradley Wright-Phillips scored his first LAFC goal while Diego Rossi and Brian Rodriguez also delivered to help LAFC erase a 3-1 second-half deficit.

The team is still thin at striker. Wright-Phillips played just an hour. Adama Diomande came on but made it just 17 minutes before he had to leave because of a possible injury. LAFC coach Bob Bradley had to turn to Danny Musovski for some forward help. The newcomer made his MLS debut but was unable to help the club deliver a winner.

LAFC is still in a better position to win. Even without Vela, LAFC scored three goals against Houston. All goals came from forwards with Wright-Phillips scoring a clutch goal

The LA Galaxy vs LAFC rivalry moves to the MLS Is Back Tournament with no fans and a neutral site. The match itself should produce another dramatic contest. Expecting anything else from these two clubs would be silly.