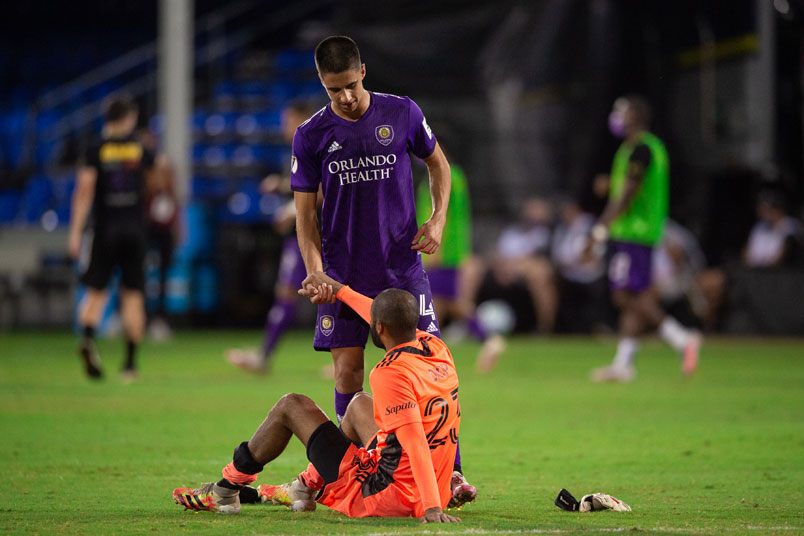 Monday's soccer news starts with the roundup of the weekend MLS is Back games. Orlando knocked out Montreal 1-0 in the opening round of 16 game. Tesho Akindele scored the only goal in the 60th minute with Pedro Gallese making one save to keep the clean sheet. Orlando will move on without Dom Dwyer, who had to have a knee scan outside of the MLS bubble.

"There were a lot of times, especially in the second half, where we had good opportunities," New England midfielder Kelyn Rowe said. "But you also have to give the opposition credit. They really did a good job of dropping and anticipating our plays. The mistakes will happen. It was hard to play out there. It was really hot and humid. Unfortunately, we made a mistake. I think when we look at the tape of how we conceded the goal, we'll definitely see that we could've done much better defending it. But still, this is a good lesson for all of us. Now that we go back home we'll have some work to do and try to improve things to prevent them from happening in the future."

NYCFC beat Toronto 3-1. Jesus Medina put NYCFC up in the 5th minute with Valentin Castellanos doubling the lead in the 55th. Maxi Moralez finished off the NYCFC goals in the 81st. Patrick Mullins pulled a goal back for Toronto in the 87th minute.

Sporting Kansas City advanced 3-1 on penalties after drawing 0-0 with Vancouver. The Whitecaps had to start their third-string goalkeeper Thomas Hasal who made eight saves to send the game into penalties. Vancouver failed to convert on their 1st, 2nd, and 3rd chances.

After parting ways with Frank de Boer last Friday, Atlanta United announced that Stephen Glass will be the club's interim coach. Glass is the coach of Atlanta United 2, with academy director Tony Annan moving into that job on an interim basis.

"I am honored to take over as interim head coach for the Atlanta United first team," Glass said in a press statement. "I am committed to continuing the hard work the team has done to establish itself as a top club in MLS, and to meeting the high standard expected of us both on and off the field. I look forward to quickly establishing a structure and rapport with the players as we prepare to return to play in our home market."

Moving to Europe, another league with another super club once again taking the title. This time it was Juventus winning Serie A for the 38th time and the 9th time in a row. "This championship has a particular flavor, certainly a strong one," Juventus coach Maurizio Sarri said. "Winning is difficult, this team has been won for many years and; therefore, every year it becomes more difficult. It has been a tiring year, a very long season. We claimed top spot two days in advance and it is thanks to this group, because continuing to find motivation after winning a lot, as I said, is not easy."

SI.com's Jonathan Wilson on Juventus's title and the issue with the same team winning each season. The NY Times' >Rory Smith looks back at the 2019-20 Premier League season. AP's Rob Harris has a big picture take on 2019-20 in the EPL. Reuters' Simon Evans on Manchester United pushing into 3rd-place. The Independent's Martyn Herman with Aston Villa avoiding relegation.