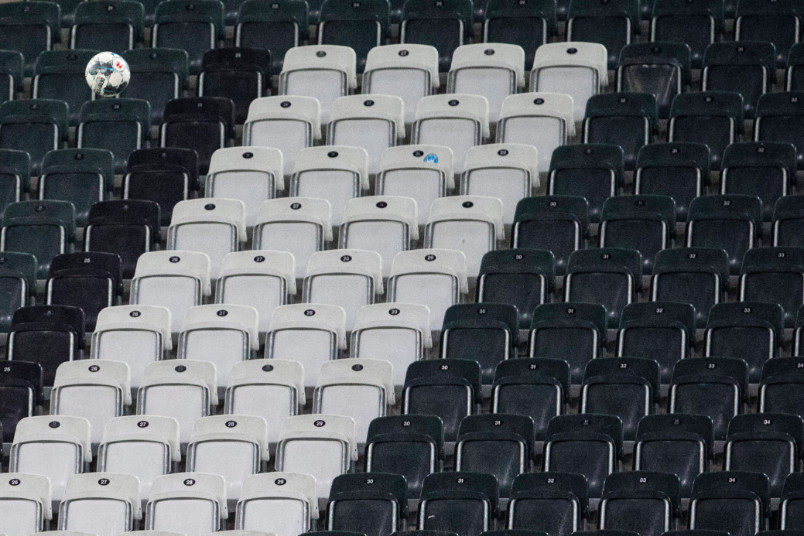 By J Hutcherson (Jul 14, 2020) US Soccer Players – For years, Major League Soccer has leaned on the idea that their European counterparts are jealous of their cost control. MLS has single-entity, even in its looser form preventing true free agency and clubs competing to sign the same player. Then there’s the pragmatic approach to the transfer market, still in its early stages of paying transfer fees that pass the $10m mark and preferring sellable assets. The Miguel Almiron scenario remains the goal of MLS transfer spending.

Meanwhile, European soccer presses on with what many believe is a broken system. The big clubs generate the most money and spend a great deal of it on the playing squad. The competitive advantage is as much financial as technical. A coach can improve a squad, but not as much as spending cash. That’s where the MLS flattering falls short. It’s normally leagues interested in what MLS is doing. The clubs in positions to spend, not so much.

So what happens when the economics no longer seems to work even for the game’s elite? We may already know. The occasional pushes for a breakaway European league speak directly to that. Clubs believing they can make more on their own extract concessions from leagues and UEFA to improve their positions. It’s the elite clubs, not the domestic leagues they represent that forced UEFA into so many automatic Champions League group stage spots. Getting them takes finishing in the top four domestically, but it’s still about those clubs rather than where they play.

That’s been the big picture problem for European soccer for so long it’s almost a cliche. The domestic leagues want more control than their elite clubs will ever allow. The clubs hold the real power, and all of the stakeholders in European soccer know that. Where it leaves them is the ongoing question.

Now, we add in a global pandemic that kept the game off the field for months. Fulfilling broadcast contracts became a significant issue for all involved. Clubs don’t negotiate those deals, but they do fight for the percentages they get based on league finish. UEFA convolutes that process by insisting on domestic representation. In their world, if all the other teams from a domestic league crash out, the remaining team deserves a bigger revenue share. That’s how a team from a big four league that ends up the only representative in the later rounds of the Champions League can make more than the winner.

That win by losing scenario is the kind of thing that has people asking basic questions. Juventus outearning Barcelona by over €28m from a Champions League they lost back in 2014-15 is the classic example of how ridiculous this can get. It’s not a meritocracy even at the highest level in Europe. It’s something open to negotiation creating interesting reward scenarios.

Reward is a big motivator for what’s happening across Europe. Clubs spend more there relative to their revenue than in most American leagues for a simple reason. They can. Most leagues lack meaningful cost control and UEFA’s Financial Fair Play rules only do so much to stop clubs from spending. The intent of those rules is to force clubs into a position where they don’t risk too much. Spending into bankruptcy is relatively easy in Europe, a distinct difference between there and the situation in North American sports. Salary caps and/or luxury taxes, collective bargaining, entry drafts, and, with the exception of MLS, no interest in selling players for fees. That’s the basics of the North American cost control model.

It’s calculating risk and spreading that across a league rather than a loose collective. What’s good for the teams regularly at or near the top of the table in Europe’s biggest leagues is rarely good for everybody else. Spending to compete will always favor those elite clubs. The frankness of the negotiations for changing the Champions League speak directly to that. The elite clubs want guaranteed games and expect UEFA to provide them. Otherwise, what’s the point of dealing with their domestic situations and UEFA at all?

Those questions resonated around European soccer over the winter, gaining voice as clubs once again considered their options. Then everything stopped. All of a sudden, the pay it forward way of doing soccer business in Europe crashed against the lack of games to play. Like everywhere else, that lurch impacted clubs and leagues across the board. We saw even the big clubs considering furloughs, government reimbursement schemes, and finding ways to reduce player payments. It was a crisis that quickly moved toward panic until business returned to as close to usual as possible.

People like to repeat the idea that broadcast rights are so high in American pro sports that fans paying to attend games hardly matter. It’s not accurate, and it’s certainly not the situation across Europe. Fans in the stands offer more than a competitive edge. It’s an essential revenue generator even for the bigger teams in the bigger leagues. Most are losing money without being able to sell tickets and everything else that goes with attending a game. Whether or not it’s enough to reconsider how money works in European club soccer may or may not be the question.

Some believe that the time is now to enforce basic cost controls across European soccer. No more spending past the point of reason. Financial Fair Play regulations at UEFA and league levels that work. Some implementation of the North American style system of a salary cap, luxury tax, or a combo. Substantial revisions to the transfer system to push past the frankly insulting bordering on dehumanizing practice of buying and selling players for cash.

If it seems like almost everything could end up on the table, that’s part of the problem. There are so few meaningful controls in European soccer that even Financial Fair Play seemed revolutionary. Manchester City’s mostly successful appeal showed the limits of UEFA’s ability to investigate and sanction under Financial Fair Play. That doesn’t make the system a failure or even a disappointment. It simply stresses the reality of a situation where there’s nothing approaching reasonable control.

That’s where European club soccer finds itself, floating between a broad dislike for regulations curtailing spending and the need to do just that. It’s almost unthinkable that a breakaway league wouldn’t impose spending regulations to keep things competitive. It’s worth asking why that’s such a hard concept to grasp for European soccer as we already know it.