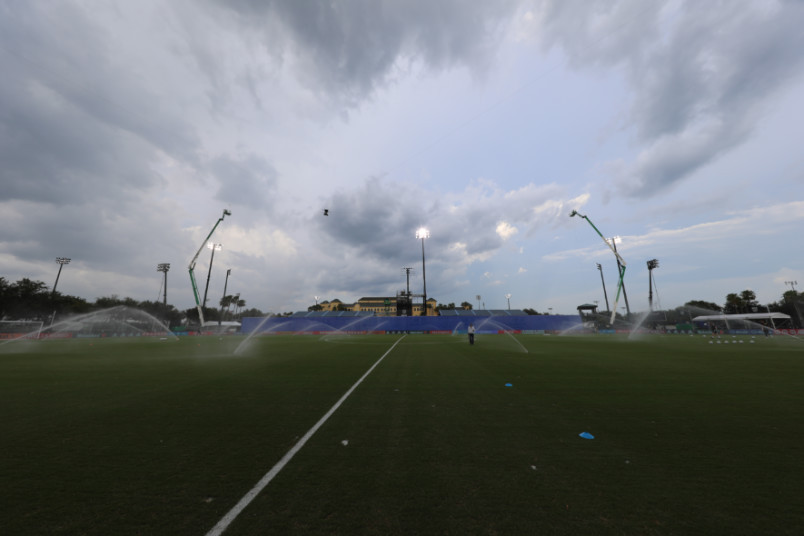 By Jason Davis – WASHINGTON, DC (Jul 22, 2020) US Soccer Players – In a typical July, Major League Soccer has the world’s club soccer stage to itself. That’s not saying much, though. Not when much of the soccer interest is focused on the high end of the transfer market or on international tournaments. In a different timeline, MLS is gasping for a bit of oxygen in a room dominated by the European championships.

This is not a typical July. The Euros and Copa America are now on the schedule for next summer. The Bundesliga just wrapped up, its season pushed into the summer by the pandemic. The Premier League is racing to its finish, its campaign delayed even longer than Germany’s.

Oddly though, MLS might be getting more attention in certain quarters this summer despite the uncommonly crowded platform. Coming out of the stoppage of the league due to the pandemic, MLS is using its Orlando-based MLS Is Back tournament to reboot attention from a wider audience. It’s a strange event, played at weird times in difficult conditions.

It’s not just bored sports fans turning to MLS. European clubs on the hunt for young talent are taking a hard look at the league during a summer when the transfer window on the Continent will happen later than ever before.

MLS’s profile as a development league is growing. A handful of the league’s brightest youngsters are making their time in Orlando count. A new wave of homegrown talent is getting a chance to play. That figures to bode well for their clubs as the transfer market heats up again.

No one deserves to be at the top of that list more than LAFC’s Diego Rossi. The Uruguayan attacker is most often playing second-fiddle to Carlos Vela in the Black & Gold setup. He serves as a secondary goal-scorer and chance creator. Vela’s ability to draw multiple defenders with the danger he creates benefits Rossi’s game. Or at least that was the book on him prior to Orlando.

With Vela back home in Los Angeles during MLS Is Back, Rossi has taken the lead for Bob Bradley’s team. Bradley is unwilling to compromise his preferred brand of soccer to tighten up a leaky defense. That makes it incumbent upon LAFC’s forward line to find ways to score multiple goals.

Rossi has more than obliged. In his club’s opener against Houston, Rossi scored and assisted in the comeback 3-3 draw. Against the Galaxy on Saturday night, with the pressure of the rivalry heaped on top of the usual expectations, Rossi dominated the game. His four-goal output with an assist on a fifth goal made the 22-year-old only the eighth player in league history to contribute directly to five goals in a game. Rossi had already done it once before, making him the first-ever MLS player to achieve the feat twice. That says a lot about LAFC, but plenty about Rossi as well.

The rumors around his inevitable departure for Europe started from the moment Rossi landed at LAX. Two-plus years into his MLS career, the chatter is now a cacophony. The 2018 expansion club bought Rossi from Penarol for a reported $2.75 million. Even conservative estimates of his current value would see LAFC reaping several multiples of that.

Rossi will finish MLS Is Back with LAFC, a club with designs on winning the tournament. He might even finish the rest of the 2020 season, whatever form that takes, with the defending Supporters’ Shield winners a leading contender for MLS Cup. However, as demand grows and Rossi moves deeper into his early 20s, LAFC will feel the pressure to send him on his way.

Sporting Kansas City’s Gianluca Busio is another MLS talent with clubs buzzing around him before the tournament began in Orlando. A silky midfielder and just 18, Busio holds a European passport and is coming into his own in Kansas City.

Though he signed as a Homegrown player at 16 following a move to Sporting from his native North Carolina, Busio’s development followed a slow and steady path. He made 19 appearances for SKC in 2019, indicating that head coach Peter Vermes trusted the teenager to play in spots normally reserved for hardened vets in his system.

ESPN’s Taylor Twellman reported last week that Busio had three Italian suitors, including two of the country’s biggest clubs, Juventus and AC Milan. Twellman said Fiorentina, notably owned by American Rocco Commisso, made an offer for Busio over the winter only to be shutdown by Sporting.

Busio’s youth national team teammate Brenden Aaronson is another standout so far at MLS Is Back. The second-year pro plays with a headiness beyond his years. He is already extremely difficult to get off the ball. Even though he’s just 19, Aaronson is already a fixture in the Philadelphia Union midfield under head coach Jim Curtin.

There are no specific rumors regarding Aaronson’s possible European future, but that doesn’t mean there isn’t interest. MLS’s decision to pursue a development league minders, something Don Garber spoke to directly starting in 2018, means the league is more open to selling young talent that at any point in its history. MLS already has a handful of proof-of-concept players in Europe. Tyler Adams and Weston McKennie are chief among them. The perception that MLS is a place to find bargains. The chances are good that Aaronson will be squarely in the sights of more than a few teams before the summer is out.

Aaronson is part of a group of Union homegrown products that include Anthony Fontana, Mark McKenzie, Matt Real, Auston Trusty, and others. Philadelphia has yet to make a significant sale of one of its locally made talents. Club officials have said that they have every intention of doing so when the right offer comes along.

Coaches across MLS are using MLS Is Back to field new players, like Sebastian Berhalter in Columbus, Kevin Paredes of DC United, and Danny Leyva of Seattle, just to name a few. Some of that is a function of the intense heat in Florida and a need to manage minutes. Those players are benefiting from the strange world we’re in. None of those players have the transfer rumor mill turning around them. Instead, they have the chance to build towards those rumors because of the unusual circumstances.

MLS gets a chance to put those players on their little corner of the world stage. It’s a corner made bigger by the moment.

Rossi is starring in Orlando, adding value to his eventual fee in the process. Busio is adding to the interest already shown in him before he arrived in Florida. Aaronson is building a resume that will make him intriguing to savvy clubs in Europe. MLS Is Back is a showcase, not just for the league, but for the talented players it’s helping to develop.