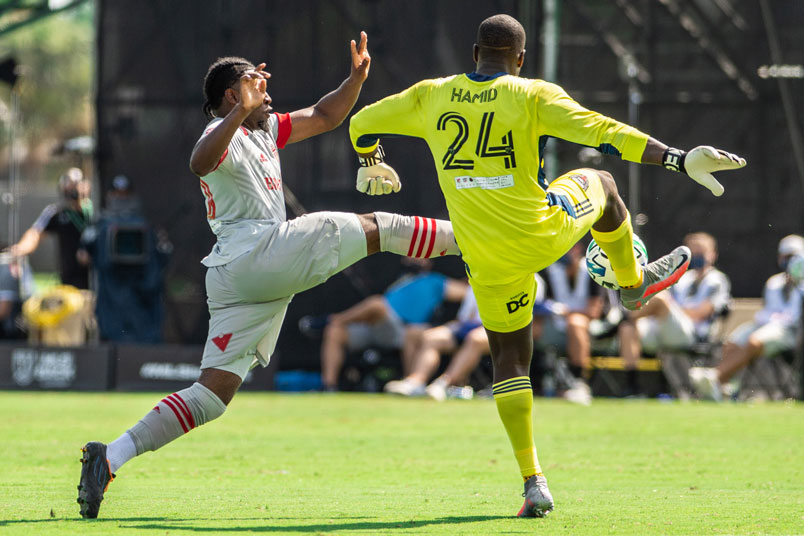 By Clemente Lisi – NEW YORK, NY (Jul 27, 2020) US Soccer Players – The MLS is Back Tournament rolls into the quarterfinals this week. What we got in the first round were some high-scoring games and last-minute epic comebacks. Aside from a few rough starts and teams that never got out of first gear, the tournament has not disappointed. With the competition entering the knockout stage, we can expect even more competitive matches over the next few weeks.

In the win or go home phase, the top two teams from each of the six groups automatically qualified for the bracket round. The top four 3rd-place finishers joined them. The round of 16 matchups started over the weekend and will conclude Tuesday in the bubble at ESPN Wide World of Sports Complex at the Walt Disney World Resort in Orlando.

The bubble, for now, is holding up despite some early hiccups. Both FC Dallas and Nashville SC had to withdraw after COVID-19 cases sidelined their players, fueling fears that the tournament would never get off the ground. The medical protocol that involves regularly testing players and requiring those on the sidelines to wear masks is working.

On the field, the games have been largely competitive with 9% of the goals scored in group stage matches coming in stoppage time. The brutally humid weather hasn’t affected the play thanks largely to the early-morning and late-evening kick-off times. The use of additional subs and water breaks has certainly helped. The tournament has also seen some surprises. The New York Red Bulls and Los Angeles Galaxy failed to advance while the Columbus Crew and Portland Timbers bucked the odds and did.

Halfway through the round of 16, we have already developed a snapshot of which teams can potentially get past the quarterfinals and compete for the trophy, the players to watch out for, and why teams failed to be competitive in Florida. Here’s a look at what we think we know.

Group E winners Columbus have been the best team at this tournament by far, but that was then as the tournament moves into the knockout stage. The undefeated Crew, with four wins and a draw in Orlando, have been clicking thanks to USMNT regulars Darlington Nagbe and Gyasi Zardes. If these two keep their form consistent in the knockout round, expect Caleb Porter’s side to land in the August 11 final.

“Well, we probably won’t turn up (on Tuesday) because everybody’s crowned them champions already. We’ll give it to them,” joked Minnesota manager Adrian Heath. “I know they’re a very good team, they’re well-coached, they’ve got good individuals, spent a lot of money on a lot of players. They’ve been very impressive.”

The other surprise side, Orlando City, has landed in the quarterfinals after winning Group A with a 2-0-1 record and defeating the Montreal Impact 1-0 in the round of 16. Midfielder Chris Mueller’s three goals helped Orlando in the first round. It was striker Tesho Akindele coming through big time against Montreal to help the home side, if you can consider them that, get one step closer to the final.

Players to watch out for

Nagbe has shown why he is a midfield maestro many times, but he’s outdone himself over the past few weeks. His ability to control the central midfield and keep the Crew from losing their shape is a big reason why this team can both effectively defend as well as create chances. He may not record goals or assists, but Nagbe can complete passes and force turnovers. These ingredients are just what a team needs to compete at a very high level.

You can’t overlook the tournament’s top scorers. Toronto FC’s Ayo Akinola and LAFC’s Diego Rossi both have five goals. Akinola got his goals following three starts in place of the injured Jozy Altidore. The US-born Akinola made the most of it and has been one of the biggest individual surprises of this competition thus far. His run came to an end after Toronto’s 3-1 defeat to NYCFC in the round of 16.

Rossi, meanwhile, is a known quantity. The Uruguayan native has been part of the LAFC attack since 2018. He stepped up following the absence of Mexican superstar Javier “Chicharito” Hernandez. Rossi became the 13th player in league history, and the first for LAFC, to score four goals in a single game. That happened last week in a 6-2 rout over the Galaxy. Up next for LAFC is Seattle Sounders. Their defense has officially been put on notice.

Back to the drawing board

The MLS is Back tournament brought with it a coaching casualty. After going 0-3 in Group E while scoring no goals in the process, Dutch coach Frank de Boer is out. That’s despite a strong showing last season that included winning the US Open Cup and Campeones Cup. Regardless, the team played so poorly in Orlando that management felt the need to part ways with him even without knowing if there will be any more league games this season.

Different tournament, same outcome for the New York Red Bulls. The team crashed out of MLS is Back, struggling in Group E to complete crosses and scoring just once in three matches. Coach Chris Armas remains in the job as the team preps for what the league hopes to be a resuming of the regular season later this year.

“I said this to the guys in the locker room after the game: It’s not good enough for a club like ours,” RBNY captain Sean Davis told MLSSoccer.com after a 2-0 defeat to FC Cincinnati. “The standards are high. We know what it takes to succeed at this club and what those standards are.”