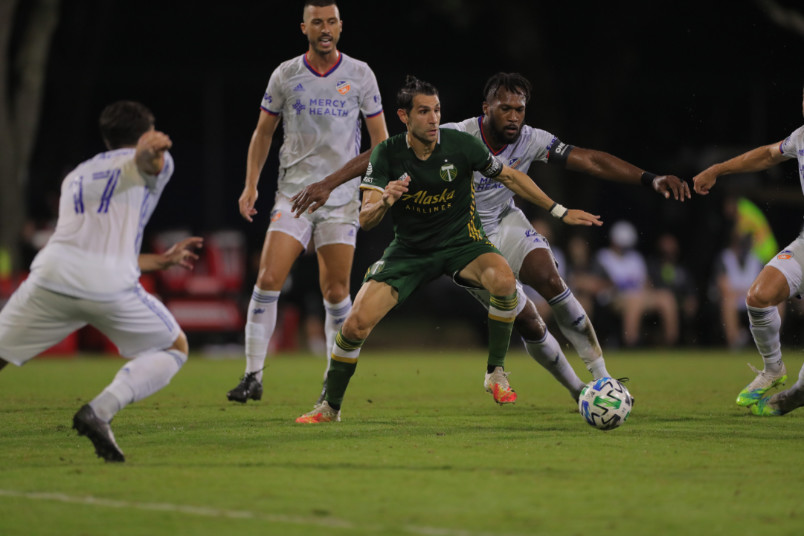 Wednesday's soccer news starts with another unexpected result at MLS is Back. Columbus was one of the favorites after going three for three in the group stage. They're now out of the tournament courtesy of Minnesota. Tied 1-1 in regulation, United advanced 5-3 on penalties. Robin Lod put Minnesota up in the 18th minute with Gyasi Zardes equalizing in the 79th. Columbus failed to convert in the third round of penalties.

"You can see with the lineup we put out, how strong it was, and how much the group gave the entire match," Columbus coach Caleb Porter said. "Certainly at the end, how much we gave, we wanted to win this game. We wanted to advance in the tournament. I'm really proud of the team for the effort that they put in today."

Portland also advanced on penalties 4-2 after drawing 1-1 with FC Cincinnati. Jaroslaw Niezgoda scored for the Timbers in the 67th minute with Jurgen Locadia equalizing from the penalty spot in the 81st. FC Cincinnati failed to convert in the third and fourth rounds.

"We knew that it was going to be the most difficult match we played so far," Portland coach Caleb Porter said. "The way Cincinnati plays, it's difficult to break them down, credit to them. We knew it was going to be tough from the beginning to the end. Nevertheless, in the first-half we were very much in control. We created some moments, some dangerous moments. Second-half it was a half in which it became more of a transitional match, and we still were the team to try to keep the ball going forward and we found an important goal. Then the game got equal, and the guys kept on fighting all the way through the end. It wasn't easy. The last few minutes were tough, but we were able to go through against a difficult team in a match that we knew was going to be very tough."

MLS is Back moves to the quarterfinals beginning on Thursday with Philadelphia playing Sporting Kansas City. Orlando plays LAFC on Friday. The quarterfinals conclude on Saturday with San Jose vs Minnesota and NYCFC vs Portland.

If you had the Crew as the favorite, it's easy enough to move the team you likely had in the 2nd spot up to the top. LAFC is fully capable of routing any team in the league right now, something that was on full display against Seattle in the knockout round. The better example might be what they did against the Galaxy in the group stage, piling on goals and making LA's other team look like they had no idea what was happening in the second-half.

Still, there's a question looking over an already questionable competition. With most of the favorites out of the tournament, is that making a bigger statement than the teams that remain? It's not a new scenario in any tournament setting when a couple of upsets turn into too many. With the group stage points counting in the league table, Columbus is top of the Eastern Conference by five over Toronto. Both are out of MLS is Back. The top four in the West are still alive, but it's an open question if any of them are better than the defending champion Sounders.

Depending on whether or not MLS can successfully restart the league schedule, we may not get a better answer than what we already have. The league table as it stands, and whoever wins MLS is Back. The favorite to do that is the 4th-place team in the West.