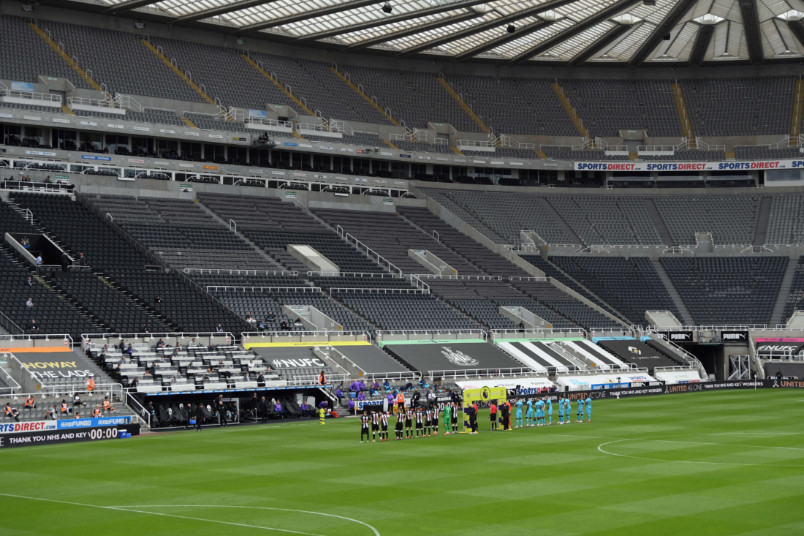 Thursday’s soccer news starts in the Premier League with DeAndre Yedlin subbing out in the 55th minute of Newcastle’s 3-1 home loss to Spurs. Trailing from the 27th minute, Matt Ritchie equalized in the 56th. Spurs scored again in the 60th. The result has Newcastle in 13th-place with 43 points from 36 games.

I was delighted with the way we played,” Newcastle manager Steve Bruce said. “Unfortunately, we’re struggling defensively with the players we have missing. I don’t want to make that an excuse but I’m frustrated because I couldn’t have been more delighted with the football we played.”

Erik Palmer-Brown’s Austria Vienna exited the Europa League playoffs with a 0-0 draw at TSV Hartberg with Hartberg advancing 3-2 on aggregate. Mix Diskerud subbed out in the 81st minute of Helsingborg’s 1-1 draw at IFK. Down a goal from the 11th minute, Assad Al-Hamlawi scored a minute into stoppage time. Al-Hamlawi subbed on for Diskerud, who saw yellow in the 21st minute.

Moving to MLS is Back, it was another multi-goal thriller with San Jose coming back to beat Vancouver 4-3 on Wednesday night. Ali Adnan put Vancouver up in the 7th minute with an own-goal doubling the lead in the 33nd. San Jose’s Andres Rios pulled a goal back in first-half stoppage time. Cristian Dajome returned the Whitecaps’ two-goal lead, scoring in the 59th. Chris Wondolowski cut that to one goal in the 72nd with Oswaldo Alanis equalizing in the 81st. In another game with plenty of stoppage time, Shea Salinas scored the Earthquakes winner eight minutes in. Wondolowski and Salinas subbed on in the 63rd minute.

“In this tournament, the substitutions are fundamental for our team. I told every single player how I feel about every one of them. As a coach, I don’t want to depend on one or two single players. I look for equality and for them to be even and they have to know what they play for. It was hard going into the 3-1. But they gave it everything they had and what they didn’t have while maintaining order. I think the substitutions were very important, but I take away the teamwork.”

FC Cincinnati beat Atlanta United 1-0, playing a man up from the 26th minute after a second yellow to Atlanta’s Jake Mulraney for unsporting behavior. Frankie Amaya scored the game’s only goal in the 76th minute. The referee consulted video review to send off Atlanta’s JJ Williams 10 minutes into stoppage time for violent conduct. Williams had subbed on in the 83rd minute.

“After 26 minutes we were one man down, then the whole plan what we thought of and how to play against Cincinnati, you can throw that plan overboard,” Atlanta coach Frank de Boer said. “I think that even with 10 men we created more chances than with 11 because they had to come out and didn’t really have an idea on how to play against 10 men. We were more dangerous at that moment. When you play a man down, you have to hope that they will force it, and we will try to get our chances. In the first half it was like that, second half was more controlled. There was no problem for us. Amaya made a great goal with his left foot into the top corner. If he shoots that 10 times, nine times it will be saved by Brad. I’m not worried about scoring goals. If you have to take a striker off because you are down a man, it’s normal that you don’t score two or three goals.”

ESPN’s Bill Connelly’s take on what Christian Pulisic has accomplished with Chelsea. DW reports on the plans for supporters in stadiums in the Bundesliga. BBC Sports’ Piers Edwards with the Africa Cup of Nations moving to the summer in 2023.