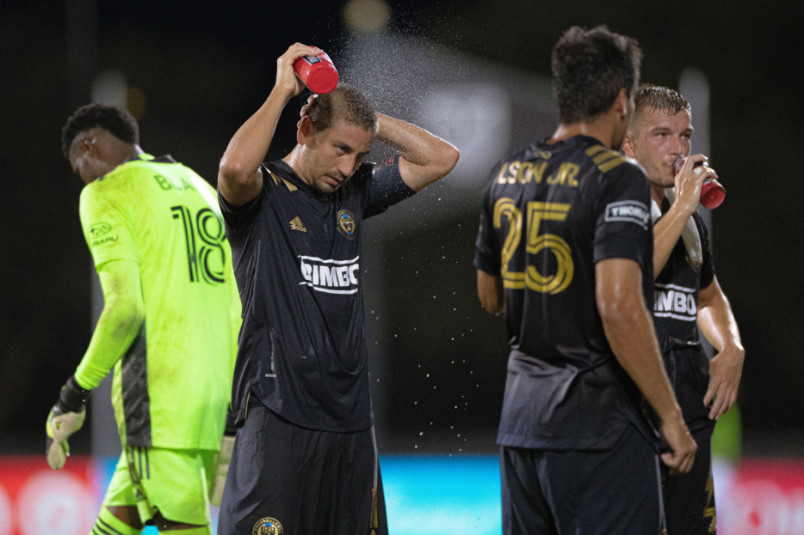 MLS is Back rolls on in Tuesday's soccer news. Philadelphia and Orlando City drew 1-1 on Monday night. Ilsinho put the Union up in the 68th minute with Mauricio Pereyra equalizing in the 70th. Orlando put 7 shots on goal to Philadelphia's 4. Both teams finish with 7 points at the top of Group A to move onto the knockout round. Orlando City takes the top spot on goal difference +3 to +2.

“It is all hypotheticals right now," Philadelphia midfielder Alejandro Bedoya said of finishing behind Orlando. "We do not know who we are going to play yet so in the grand scheme of things it doesn’t really matter right now. The things is we are moving on. I wish we would have won and topped the group and we will see who we play. There are going to be some good quality teams that finish in third place."

Tuesday morning's game saw Toronto and New England play out a 0-0 draw. Toronto put 5 shots on goal to the Revolutions' 2. Both teams finish Group C play with 5 points and a +1 goal difference. DC United plays Montreal tonight to decide the final standings. United enters the game with three points and an even goal difference.

Moving to Europe, DeAndre Yedlin was on the bench for Newcastle's 0-0 draw at Brighton. Both teams finished with 10 shots with Brighton putting 3 on goal to Newcastle's 1. Newcastle is 13th in the Premier League table with 44 points from 37 games.

"Nice to keep a clean sheet with the problems we've had and the amount of injuries we've had," Newcastle manager Steve Bruce said. "We're a lot of tired bodies and we can't rotate like others can.... We didn't play that well, but we kept a clean sheet which helps. We needed one."

Shaq Moore's Tenerife lost 2-1 at Numancia to finish out the Segunda Division season. Down a goal from the 11th minute, Nikola Sipcic equalized for Tenerife in the 60th. Numancia scored again in the 64th minute. Tenerife finished in 12th-place. Aron Johannsson wasn't in the squad for Hammarby's 1-1 home draw with Goteborg. Imad Khalili scored Hammarby's goal in the 69th minute with Goteborg equalizing four minutes into stoppage time.

Also in the soccer news, UEFA president Aleksandar Ceferin spoke about UEFA's response to the pandemic. "We, as a governing body, have had to bear in mind that we must take care of all of football – not just UEFA's competitions," he said. "Consequently, we've tried to lead the way in Europe, and I think we've done so quite successfully. I think the decision to postpone EURO 2020 to next year was a key moment, because it was taken at quite an early stage. Everybody understood that we did this to help the other stakeholders and, once more, I must underline the spirit of total unity and solidarity that was forthcoming."

The theme of solidarity in Ceferin's interview with his organization's magazine speaks to the broader issues specifically for European club soccer. What the pandemic may or may not have changed about the negotiations over the Champions League's future is an open question, at least for those of us on the outside. That goes hand-in-hand with the willingness of the region's elite teams to form their own breakaway super league.

For Europe as a whole, the problem with losing money is that it's across the board. Should clubs use that as an opportunity to focus on their own interests, it's not a huge step to see the ones with the most to gain acting accordingly. That may not be in UEFA's newfound spirit of solidarity, but it could make the most business sense.

SI.com's Avi Creditor on the likliest winners of the now cancelled Ballon D'Or. The Independent's Jonathan Veal explains what relegation may not mean for Aston Villa. BBC Sport's Simon Stone on the issues with relegation in the Championship. The Telegraph works through what's at stake on the final day of the Championship. Reuters' Brian Homewood has FIFPro stressing the amount of games for players.