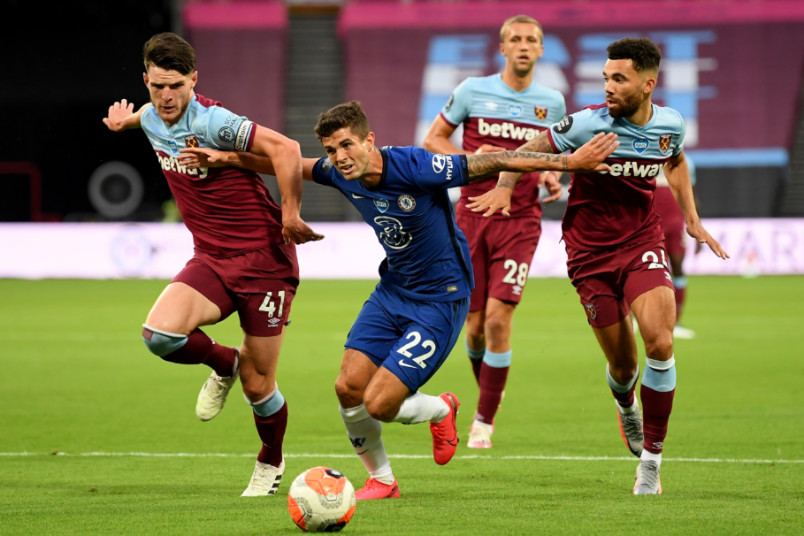 Thursday’s soccer news starts with another strong showing from Christian Pulisic, playing a part in both goals for Chelsea in a 3-2 loss at West Ham. Pulisic set up the penalty Willian converted in the 42nd minute. West Ham equalized in the 51st with Pulisic assisting on Willian’s goal in the 72nd minute. West Ham went ahead for good in the 89th minute.

“It is a big positive, he is playing well as everyone can see,” Chelsea manager Frank Lampard said of Pulisic. “Plus with Willian as the two wingers, Willian got his two goals. Christian had a patch running up to Christmas when he was playing towards his level as well and he got injured and was out for a long time. So it is nice to see him back, fresh and hungry and playing with the quality he has. He is going to get better. He is a young player with great talent.”

Chelsea is in 4th-place in the Premier League table with 54 points from 32 games played. They’re a point behind struggling Leicester City and two points ahead of 5th-place Manchester Union. Depending on the outcome of Manchester City’s appeal of its European ban, 5th-place could qualify for the Champions League.

DeAndre Yedlin subbed on in the 73rd minute for Newcastle’s 4-1 win at Bournemouth. Dwight Gayle put Newcastle up in the 5th minute with Sean Longstaff doubling the lead in the 30th. Miguel Almiron made it 3-0 in the 57th with Valentino Lazaro scoring in the 77th. Bournemouth’s goal came four minutes into stoppage time. In the Championship, Duane Holmes subbed out in the 65th minute of Derby County’s 1-0 win at PNE. Wayne Rooney scored the game’s only goal in the 18th minute from a free kick with Ben Hamer making one save to keep the clean sheet.

“I think it was not an easy win today,” Derby County manager Phillip Cocu said. “We had the same amount of points and position in the league ahead of kick-off, so we expected a tough game and it was. It was a great goal from Wayne Rooney, a great free kick, that gave us the win. At the end of the game we really had to pull everyone together to get the win.”

Moving to Norway, Romain Gall subbed out in the 72nd minute of Stabaek’s 2-0 win at Stromsgodset. Kornelius Hansen scored in the 33rd and 41st minutes. Stabaek is in 5th-place five rounds into the 2020 Eliteserien, tied on eight points with the 3rd through 7th-place clubs.