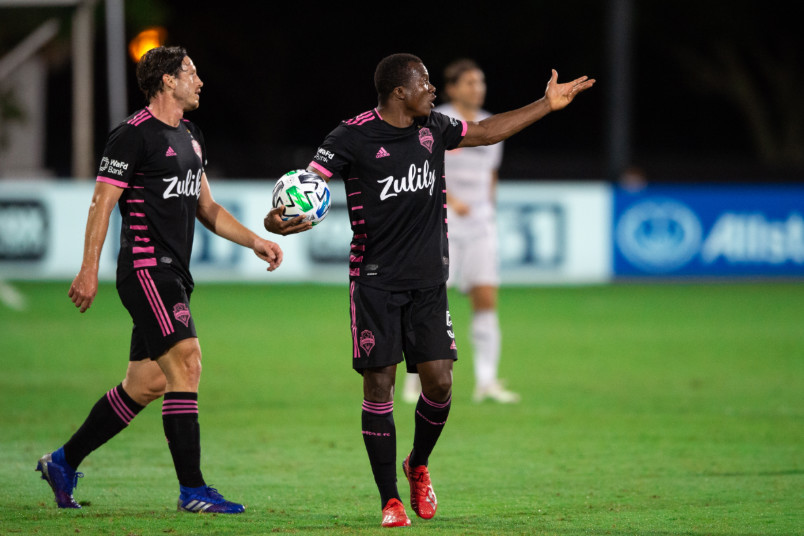 By Jason Davis – WASHINGTON, DC (Jul 29, 2020) US Soccer Players – Say goodbye to the champions. The Seattle Sounders exited the MLS Is Back tournament in Orlando on Monday night, humbled by LAFC. Call it revenge if you like, though the stakes are just a bit different. The Sounders knocked LAFC off of their championship path in the 2019 MLS Cup playoffs.

Say goodbye to last season’s MLS Cup runners-up as well. Last year’s Eastern Conference champion, Toronto FC, is also heading home from Central Florida following the club’s ouster by NYCFC on Sunday. Revenge was also part of the story there since it was the Reds who ended NYCFC’s season at the conference semifinal stage in last year’s playoffs.

Two proud teams, one of them still defending MLS Cup champion regardless of the results at MLS Is Back, will head home to ponder what the post-Orlando experience brings. MLS is planning a revised regular season and the MLS Cup will still be in play. Seattle wants to join DC United, Houston, and the Galaxy as the only clubs to repeat as champions. Toronto wants to claim the trophy that it just missed out on in 2019.

Neither Seattle nor Toronto fell at the first hurdle, a la Atlanta United or the Red Bulls. The end of the run in Orlando won’t cause the sort of hard looks in the mirror that are happening in those places. Neither club went as deep in the tournament as they wanted. Regardless, their performances point to both contending for honors when the world returns to normal.

Save for the fact that we don’t yet know when that will be, the recent evidence bears review. Things move quickly in MLS. Even six months can turn a contender into an also-ran.

Toronto FC played some of the best soccer of the group stage at MLS Is Back. The club worked through a tumultuous arrival in Orlando thanks to COVID-19-related delays and managed to finish atop Group C with five points and a +five goal differential. The 1-0-2 unbeaten group stage record included a 4-3 win over Montreal and a pair of draws against DC United and New England.

Drawing with DC looked poor on paper because of the way the Reds dropped two points. United charged back from two goals down to steal a point. A minor scuffle broke out after the game. The fight appeared harmless and resulted in no discipline from the league, but it did portend the rocky road ahead for both teams.

Toronto’s performance against NYCFC came well short of the club’s usual standard. One of the breakout stars of the tournament for Toronto, American forward Ayo Akinola, missed out due to a hamstring injury. Jozy Altidore, the Reds’ first-choice striker, remained on the path to fitness following the pandemic shutdown. Altidore played sparingly at MLS Is Back, including during the last 33 minutes of the loss against NYCFC. His absence was, of course, noticeable.

Forwards were an issue for Toronto, with head coach Greg Vanney’s team struggling with its usual pattern of play. Michael Bradley’s return to the field for MLS Is Back following ankle surgery late in the offseason was a boon to TFC, but the US international was powerless against NYCFC in the Round of 16.

Ronny Deila and NYCFC used playmaker Maxi Moralez to man-mark Bradley, forcing Toronto’s centerbacks to find other options than the captain when playing out of the back. New York’s quick midfield group used sloppy Toronto passing to create counterattacking opportunities.

Playing from the front gave NYCFC the freedom to sit deeper and make Toronto force the ball upfield and into the teeth of their formation. NYCFC deserves credit, even with the clear evidence that Toronto played poorly.

Toronto faces questions across its team if and when the regular season resumes. A lack of footspeed, particularly in the backline and midfield, doomed the Reds against a quicker team. That’s likely to stress both the depth and the age of Vanney’s team. Toronto rebounded to its expected place among the East’s elite thanks to a good run of health and the addition of a few key pieces. If the lost step that cost them at MLS Is Back remains in evidence when the 2020 season resumes, there could be a reckoning on hand.

There’s less concern about the Sounders. Right now, the champs are clearly behind a version of LAFC without Carlos Vela. Regardless, Seattle has the pieces necessary to make another run at the MLS Cup title.

Jordan Morris played excellent soccer throughout the tournament, fading only in the knockout match against LAFC. The US international has refined his game in every area, becoming a better finisher and decision-maker. Flagging stamina and the intensity of LAFC’s style explains some of the shine coming off of Morris in the Round of 16. He looks ready to put in an MVP-like season when regular play resumes. Nicolas Lodeiro is as industrious and creative as ever, capable of changing a game in a moment.

The Sounders boast experience and quality in the midfield and possess several solid options on the wings and at fullback. Stefan Frei is as steady as they come in goal and gives Seattle an edge in goal in most games. This is a well-resourced team always capable of adding to its roster if a need arises.

MLS Is Back shined a bright light on the problems Seattle faces with its centerbacks. LAFC was relentless with its pressure, forcing Seattle into difficult situations that the Sounders could not handle. A pair of crucial mistakes by 2019 signing Xavier Arreaga stood out in the loss. That troubling pattern of simple mistakes is enough to wonder about his place in the starting lineup and the wisdom of the Sounders’ acquisition of the 25-year old.

Arreaga was next in line following the retirement of Chad Marshall and the departures of Kim Kee-hee and Roman Torres. The Sounders acquired 28-year-old Colombian Yeimar Andrade to pair with him before the season. Andrade missed the match against LAFC with a hamstring injury. Early returns on his fit in Seattle and MLS are inconclusive.

MLS Is Back is of questionable value as evidence of the quality of the teams, especially with the rest of the 2020 schedule still up in the air. Toronto may sort out its issues with age and speed and contend in the East. Seattle might get by with the group of defenders on the roster, or upgrade in the transfer window. What we already know is that staying good in MLS is never easy. That should be on the minds of last season’s finalists.