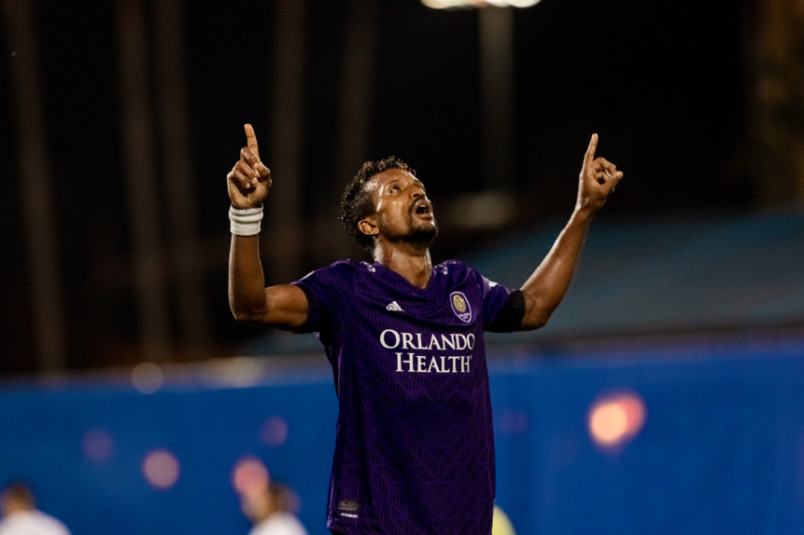 By Charles Boehm – WASHINGTON, DC (Jul 9, 2020) US Soccer Players – As promised, MLS is back. Despite an escalating COVID-19 outbreak across Florida, the loss of two participating teams to the virus, and logistical and organizational challenges, the league resumed its 2020 season a Disney’s Wide World of Sports complex on Wednesday night as Orlando City edged Inter Miami 2-1. Barely 12 hours later, it made history with its earliest-ever match, a 1-0 Philadelphia Union win over New York City FC that kicked off shortly after 9am ET. Here’s a few observations from the first two games of the unique tournament that will unfold over the next month.

Signs of the times

No soccer match can separate itself from the wider moment in which it occurs. It became clear well before Wednesday’s kickoff that the new Black Players for Change coalition was determined to make sure of that for MLS is Back.

The two teams were joined on the field by more than 100 BPC members and Black coaches in a pregame tribute to George Floyd and the Black Lives Matter movement that was both stark and moving. For eight minutes and 46 seconds, they bore silent witness to the victims of police brutality and racist violence.

As the two starting XIs kneeled, many raised fists in a nod to iconic 1968 Olympians John Carlos and Tommie Smith. All wore custom t-shirts designed by Philadelphia midfielder Warren Creavalle with messages like “silence is violence” and “MLS is Black.” The following morning Creavalle and his Union teammates produced their own powerful display, revealing that the backs of their match jerseys carried the names of victims in place of theirs.

The face coverings worn by nearly everyone on-site provided another reminder of the strange times we’re living in. The coronavirus pandemic continues to loom large. Thursday brought news of a second team, Nashville SC, removed from the tournament due to an outbreak of positive COVID tests just as FC Dallas were a few days prior.

MLS will hope fervently that those exits can help marginalize the pandemic’s disruption of the event. The BPC has resolved to make sure that the conversation about race and policing stays in the spotlight.

In the lead-up to Wednesday’s opener MLS and ESPN officials had spoken at length about the new technologies and hefty investments put to use on the broadcast production of MLS is Back. Every single match would receive the same resources as MLS Cup, said ESPN producer Amy Rosenfeld, with more than twice the cameras, microphones, and assorted gizmos as a typical league fixture.

As it turns out, the most immediate manifestation of all that was an endless cavalcade of sponsor logos and in-game advertising. As one observer wisecracked on Twitter, it appeared that MLS was intent on cramming a season’s worth of marketing placement into one game, with a field-length, ad-splashed greenscreen in place of fans in the stands.

Perhaps the coup de grace was a huge adidas logo imposed on the center circle all game. The badge of one of the league’s biggest partners was so large as to provoke questions about whether it was a violation of FIFA regulations on the playing field. It’s not. That shouldn’t escape the notice of other leagues and broadcasters, nor will the rest of the relentless commercialization. An unsettling glimpse into the game’s television future, perhaps.

What may be more immediately important to the players, coaches, and referees is how the extra cameras and mics pushed the viewers’ eyes and ears deeper into the on-field action. That was clear with the coverage of Dom Dwyer and Andrews Reyes clashing in pursuit of a long Orlando clearance. That moment changed the course of the game. Miami’s impressive center back left on a stretcher in obvious pain as ESPNshowed a range of camera angles of the play. Fair warning, the eyes in the sky are watching even more carefully than usual.

The Reyes-Dwyer sequence also put the spotlight on referee Rubiel Vazquez. Though most saw no obvious ill will in the contact, it was one of several examples of rugged physicality that made the game’s five total yellow cards seem like a laissez-faire approach.

So in a time of great upheaval, MLS watchers found themselves back in the familiar position of dwelling on the officiating. This is a tough, nuanced conversation to have, because refs in the US and Canada face about as many challenges as players and coaches do.

In this case, 47 referees have gone into the “bubble” just like the teams, leaving their homes, families, and daily lives behind to be part of MLS’s unprecedented experiment. They too are racing to regain match sharpness in a compressed period in Florida’s fearsome summer heat and humidity. They also have their movements restricted and face real health risks in the service of the greater good.

Overall it’s a stiff challenge. The heightened visibility of this event looks like a double-edged sword, with any errors or marginal calls likely subject to additional scrutiny.

What translates and what doesn’t

Another risk of this “bubble” strategy is that the play itself could resemble something like “test-tube soccer,” shorn of the emotion and energy that fans bring into home stadiums. As other leagues have learned over the past few weeks, there’s no easy way to replace that atmosphere and its effects on the players as well as the broadcast product.

Nor is there a clear and obvious consensus on what most viewers want. Some have piped faux crowd noise into their audio feeds. That’s a sort of psychological reassurance to members of the audience put off by the absence of the ambient sounds. MLS and ESPN took a different tack, leaving that out after consultations with the Independent Supporters Council revealed that supporters’ groups are wary of canned noise replicating their chants and songs.

We already knew that fans make games matter. There was limited evidence that a lust for Florida bragging rights added extra intensity to Wednesday’s game. A vocal urging of real live supporters would’ve changed that for the better.

That doesn’t mean nothing was on the line. The competitive edge is there with games counting in the standings and the Concacaf Champions League slot awaiting the tournament’s winner. The best stretches of play in the first two games suggested that the aesthetics will improve as a measure of full speed is regained.

Though a significant number of players clearly carry reservations about the whole MLS is Back undertaking, many others also derive a great deal of fulfillment from playing the game they love. If the pandemic doesn’t intervene, their talent and commitment may get a chance to shine through on a bigger stage than usual. That’s about as good as it’s going to get right now.