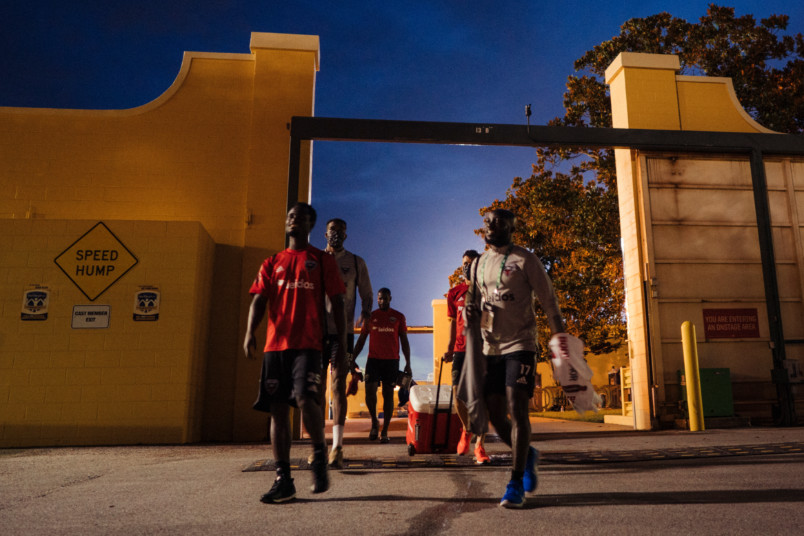 By Jason Davis – WASHINGTON, DC (Jul 10, 2020) US Soccer Players – Because it feels like decades rather than months, it’s easy to forget that Major League Soccer rolled out the “MLS Is Back” branding way back in February ahead of the league’s 25th season.

“MLS IS BACK” read the press releases trumpeting a quarter-century of existence. Simple as it was, the slogan avoided the cringy, pun-centric branding the league had used in years past. Even while admitting that MLS has a long way to go to measure up to the major American sports and the top soccer leagues of the world, the bluntness of “MLS IS BACK” spoke to the league’s quiet confidence.

It wasn’t just the 25 years that the league was celebrating. It was a North American map dotted with soccer-specific stadiums. It was the hundred of millions of dollars waved at MLS by potential ownership groups from cities desperate to jump on the soccer bandwagon. It was the rising influence of the league in the international transfer market, as evidenced by one of the most expensive offseasons in its history.

“MLS IS BACK” was the slogan of a league that no longer felt the need to explain itself. It was simply information, delivered with confidence. The subtext of saying “MLS IS BACK” ahead of a new season is that it nods at the fact that MLS is now part of the American sports furniture.

In the context of the tournament now underway in Orlando, the “MLS is Back” messaging is very different. The league chose to name the return-to-play concept “MLS is Back.” This time, it wasn’t about celebrating a milestone season. Instead, it was to relay the obvious. It’s a bullhorn aimed at the hibernating sports world.

With every sports league schedule thrown into chaos, baking that information into the name of the tournament, as awkward as the moniker sounds, makes sense. We can forgive people for not being sure of anything in the current moment. That extends to trying to make sense of what MLS is doing in Central Florida.

The pandemic is still raging. The Orlando area counts among its most intense hotspots. A series of protocols meant to limit exposure to the virus and create a “bubble” in Florida is no guarantee that the whole enterprise won’t collapse at some point before the end of the tournament. The very real problem of players needing to leave the league’s controlled resort environment for any reason has already popped up with Inter Miami’s Andres Reyes.

Reyes received a seemingly innocuous blow to the throat from Orlando City’s Dom Dwyer on Wednesday night. He ended up at an area hospital with breathing problems. Because he left the MLS “bubble”, he returned to quarantine while waiting out the incubation period for the COVID-19 virus. Once that passes, a test can confirm he is healthy and able to return to play.

If Inter doesn’t progress from the group stage, he might not play again in Orlando. Reyes now exists in MLS Is Back limbo, a middle place between the distorted reality of the tournament itself and the outside world.

Maybe that’s not right. Perhaps Reyes is indeed in a middle place, but only because the whole of MLS Is Back exists in a strange alternative to most of our realities. Watching the tournament’s first few days unfold has been an uncanny experience. It’s replete with an overabundance of advertising, virtual jumbotrons displaying fans sitting at home, lack of cheering on ESPN’s broadcasts, and interviewees answering questions while wearing the must-have accessory of the pandemic, the mask.

The whole thing feels like an experiment in creating a made-for-TV product. It’s a flash-forward to a world when sports are no longer live, in-person events but rather pre-packaged self-contained fare that leans into the control possible in a place like the Wide World of Sports. The word “bubble” as a reference to the conditions in Orlando might better describe the detached nature of the event than the health protocols meant to keep out the virus.

We’re watching soccer behind glass. The game is the same, but everything about it is off. Because we can’t know when we’ll be back to the pre-COVID normality, watching comes with angsty dismay. This is an approximation of the game we love. While it’s the best we can do, something we understand intellectually, that does little to assuage the eerie feeling.

MLS can’t want that world, not when the league is so dependent on ticket sales revenue. The amount of deference it’s showing to its TV partners points to how important that relationship is to its future. Because the league doesn’t have to worry about the in-stadium audience, it can bend over backward to service the broadcasters that hold the key to MLS’s place in the hierarchy of sports products. It can wash the screen in ads. It can force teams to play at 9am and 10pm because of heat and humidity that is still oppressive despite those start times.

There’s still a month left of MLS is Back in Orlando. Two teams are gone, removed from the competition because of a rash of confirmed COVID-19 cases. The integrity of the competition, if such a thing existed in the first place, has taken a hit. Yet barring insurmountable problems, MLS looks intent on pushing forward and playing this thing out.

What’s it called when you drag a thousand people into a pandemic hotspot, sequester them inside a “bubble”? When you put more than $1 million on the line to make it more competitive. How about declaring that a portion of the games will count in the regular-season standings. Then slap garish logos all over the broadcast to claw back lost revenue. Mic everyone up but bleep out the most entertaining words. Start games at 9am to avoid the unavoidable heat. Then pretend like it’s all kind of normal when it is so clearly not? You call it MLS is Back.