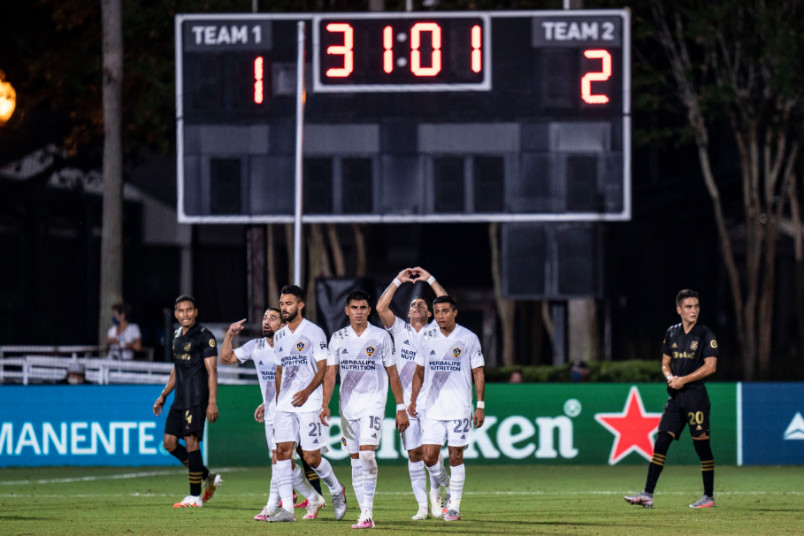 By Luis Bueno – RIVERSIDE, CA (Jul 22, 2020) US Soccer Players – If you are not sure how many championships the LA Galaxy has, just ask them. The club is quick to boast how it is the only team in league history to win five MLS Cups, that the Galaxy has been a fixture in Los Angeles since 1996, and that the game’s top stars have called and continue to call the Galaxy home. The Galaxy certainly has a rich history filled with victories, championships, and stars. Right now, all of that means very little.

After two games in the MLS Is Back Tournament, the LA Galaxy sits at the bottom of the Group F standings with two losses, including an embarrassing loss to rivals LAFC. No team has looked poorer and more clueless through this stage of the tournament than the Galaxy.

It’s that lack of recent success that keeps causing trouble for the Galaxy. This is now a team lacking the ability and the star power to crawl out of the shadow that the team’s own history has cast. This Galaxy team is closer to a sixth playoff miss than it is to a sixth MLS Cup.

Despite the franchise’s rich history, there have been some low points in the Galaxy’s past. The club reached the playoffs in its first 10 years of existence but after winning MLS Cup 2005, the club’s second Cup title, the Galaxy failed to make the postseason from 2006 through 2008. The club’s other low point came in 2017, when the Galaxy overhauled its coaching staff and roster and promptly fell apart. They finished with a franchise low 32 points and a ghastly 18 losses, also a club record.

Yet despite that futility, this strange season is turning out to be a bigger problem. The Galaxy’s 0-3-1 record has earned the club just one point. That’s the worst start in club history.

Of course, the conditions have been nothing if not adverse. The false start to the season in February. Regrouping all of these months later for a tournament that also counts in the league standings. That meant a second preseason and traveling across the country during a pandemic.

While other teams have overcome those obstacles, the Galaxy most certainly did not. The team went to MLS is Back already down one key player. Jonathan Dos Santos was ruled out in early July with a sports hernia injury. Javier “Chicharito” Hernandez lasted one match and was lost for the LAFC game with a calf injury so severe that it ruled him out of the tournament and sent him back home earlier than the rest of the squad.

The Galaxy’s first match of the tournament was not a complete waste. Although the club lost 2-1 to Portland, they had chances to score beyond its one goal. The team finished the game scratching and clawing for an equalizer that never came.

Whatever the Galaxy learned about itself against the Timbers didn’t hold in the LA derby. The Galaxy’s effort in that game ended up atrocious, and perhaps fitting. Losses against rivals expose the worst in all teams and can have a long-lasting impact. The Galaxy’s last city rivals – Chivas USA – never recovered as a franchise after losing to the Galaxy in the 2009 MLS Cup playoffs.

Not having Dos Santos and Hernandez exposed the club’s lack of depth. Perhaps any club would struggle without two of its three Designated Players. That eventually proved true, but the Galaxy was competitive for one half. They didn’t belong on the same field as LAFC in the other half as a 2-2 halftime scoreline turned into a 6-2 triumph for LAFC.

The game revealed some of what has hampered the Galaxy this season. Guillermo Barros Schelotto’s in-game management was puzzling. The Galaxy did not make halftime adjustments and could not counter LAFC’s adjustments. While LAFC made changes that livened up the match, the Galaxy grew tired and wary. The Galaxy made just one substitution before the 85th minute. By that time, the match was 5-2 in favor of LAFC. The two players who finally came on, Sacha Kljestan and Efrain Alvarez, could have helped slow down LAFC’s midfield, which took full advantage of the Galaxy’s tired legs.

Barros Schelotto is now in his second season as Galaxy coach. It’s a team still waiting to respond. The Galaxy did reach the playoffs a year ago, an improvement over the previous two seasons. The current situation demanded more, a proof of concept about this club. Instead, it’s another set of problems.

It’s worth stressing that this isn’t a team in flux. Barros Schelotto got his most-coveted target, Cristian Pavon. Other players such as Hernandez, Kljsetan, and defenders Giancarlo Gonzalez and Emiliano Insua also came in while he’s been in charge. Barros Schelotto may have inherited a team in transition, but this is not his inherited team anymore.

Unlike Atlanta and DC United, the Galaxy can still salvage their tournament with the kind of performance LAFC showed against them. Beating Houston in the Group F finale means 3rd-place. In order to finish as one of the four best third-place finishers, the Galaxy would have to have some results go its way but mostly the Galaxy would need to beat Houston by at least four goals. Short of that, though, the Galaxy will limp out of the tournament in the group stage.

What the future holds beyond the tournament is anyone’s guess. The league has not announced any matches or any sort of schedule past August 11 when the MLS Is Back tournament concludes. It is possible the Galaxy and the rest of the league will return to a regular schedule sometime in August or September. The Galaxy needs to get healthy in a league where dependence on designated players is the norm. Once again, they also need a turnaround.