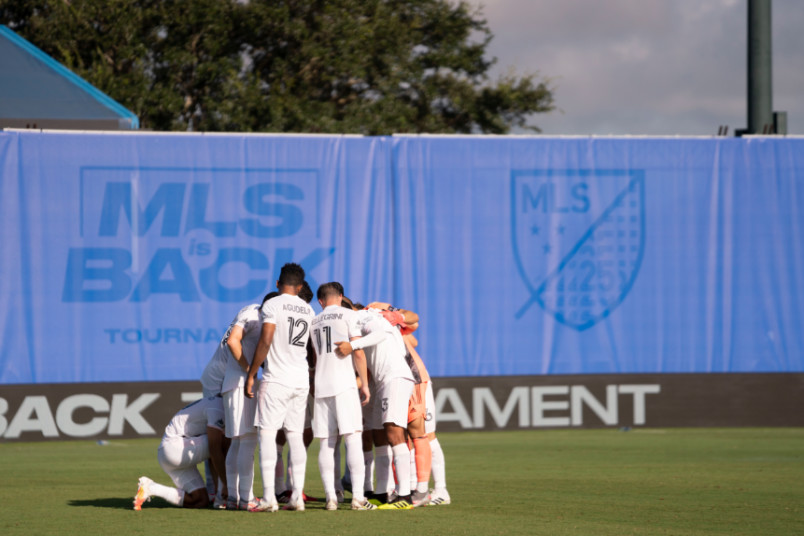 The soccer news starts with the MLS is Back roundup. DC United and New England drew 1-1 on Friday. Adam Buksa put the Revs up in the 51st minute with DC equalizing in the 72nd.

"We had a 1-0 lead," New England coach Bruce Arena said. "We were controlling the game. We created some other chances. Our opponent really didn't create any chances on the night. Their goal was, we use an expression in the sport, it was a gift. You've got to give them some credit. They stepped up and pressured us and we gave the ball away, but you still have to finish the play. But we gave the game away."

Sporting KC beat Colorado 3-2. Kellyn Acosta scored for the Rapids in the 6th minute, with Colorado going a man down with a red card to Danny Wilson in the 61st. Sporting KC equalized through Khiry Shelton in the 65th with Alan Pulido converting a penalty in the 72nd. The Rapids lost another player to a red card with Jack Price exiting for foul and abusive language. Jonathan Lewis equalized for Colorado in the 84th. Graham Zusi scored Sporting's winner a minute into stoppage time.

On Saturday, Portland beat Houston 2-1. Jeremy Ebobisse scored in the 35th and Diego Valeri doubled the Timbers lead in the 61st. Alberth Elis converted a Dynamo penalty in the 86th minute. Elis saw red two minutes later after picking up a second yellow for unsporting behavior.

"Overall, I think it was a good game for both squads," Houston coach Tab Ramos said. "We certainly went forward a lot, which is what we want to be doing. I am happy with that part of it. We created a ton of chances, I think we had 22, 25 shots somewhere in there. Some of them were blocked, but I think we are getting there. We are creating opportunities against good teams and the effort of the team was really good, so I'm happy with that."

LAFC beat the Galaxy 6-2. An own-goal put the Galaxy up in the 5th minute with Diego Rossi equalizing from the penalty spot in the 13th. The Galaxy's Cristian Pavon converted a penalty in the 31st with Rossi equalizing two minutes into stoppage time. Bradley Wright-Phillips made it 3-2 in the 56th with Rossi scoring again in the 75th. Mohamed El-Munir extended the LAFC lead in the 80th with Rossi scoring his fourth goal two minutes into stoppage time.

San Jose shutout Chicago 2-0 on Sunday. Christian Espinoza scored in the 56th minute with Chris Wondolowski doubling the lead in the 83rd.

"Wondolowski is a goal scorer," San Jose midifelder Jackson Yueill said. "He's such a good leader, such a good captain and hardworking guy. I think he can still play another five more years and come out and score in almost every game if he really wanted to. His presence on and off the field is one of the reasons why the locker room does so well, and the team supports each other. He's such a big influence on myself since I've been here, and for everyone from the older guys to the younger guys. His presence brings a lot to the team."

Seattle shutout Vancouver 3-0 in the late game. Nicolas Lodeiro converted a 16th minute penalty with Jordan Morris doubling the lead in the 34th. Raul Ruidiaz finished off the goals in the 51st minute. Stefan Frei made two saves to keep the clean sheet.

A quick run-through of the groups has Orlando City and Philadelphia advancing from Group A, San Jose in Group B, Columbus from Group E, and Portland from Group F.

Major League Soccer also announced a change to the timeline for expansion teams joining the league. Charlotte will now wait until 2022 rather than entering with Austin next season. St Louis and Sacramento move from 2022 to 2023. "We have always taken a thoughtful and strategic approach to our expansion planning and have delivered successful launches for every new club," commissioner Don Garber said. "It is important for each club to take the necessary time to launch their inaugural MLS seasons the way their fans and communities deserve. With the extra year to make up for what has been a challenging 2020, these teams will be well-positioned for their debuts and for long-term success."

The NY Times' Rory Smith with Leeds returning to the Premier League. The Independent's Tom Kershaw asks about Spurs under Jose Mourinho. The Guardian's Nicky Bandini explains what happened to Inter Milan this season.