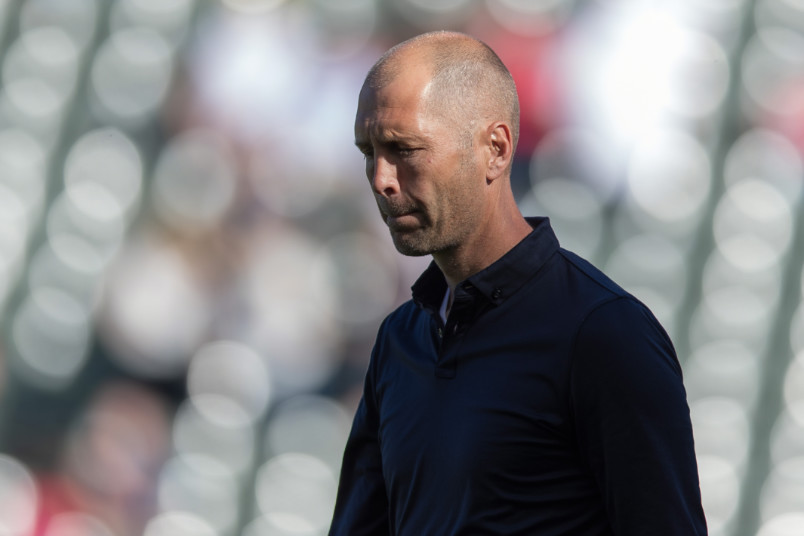 By Charles Boehm – WASHINGTON, DC (Jul 23, 2020) US Soccer Players – Gregg Berhalter conducted one of his most in-depth media sessions in months on Tuesday, spending nearly an hour on a Zoom call with reporters. He’s entered the so-called bubble at the MLS is Back Tournament outside Orlando, Florida to scout the games and keep in touch with MLS-based members of the player pool. The scope of the conversation ranged much wider, though.

By now, most USMNT followers will have picked up the biggest story lines, from the individual situations of Ayo Akinola, Christian Pulisic, and Darlington Nagbe to his outlook on the upcoming schedule.

What 2022 Concacaf World Cup qualifying will look like remains an open question. A month ago, the confederation canceled the September international window. Concacaf announced that “the challenges presented by postponements to the football calendar, and the incomplete FIFA rankings cycle in our confederation, means our current World Cup Qualifying process has been compromised and will be changed.”

Rumors and reports have that becoming a potentially dramatic overhaul. It may mean dispensing with the iconic Hexagonal round entirely. While Berhalter seemed to suggest that he doesn’t know much more than anyone else about what will happen, he expects an announcement soon. Though Concacaf isn’t confirming anything, qualifying could kick off in the November window with preparatory friendlies possible in October. That should leave time for the Hex as we know it.

“We’ll deal with whatever comes,” he said. “But having said that, even if qualifying doesn’t start in 2020, there’s plenty of time to get a Hex done … You need 10 dates, or 10 game days, and that means it’s five windows. They’ll be able to figure that out.”

The arduous Concacaf road could look and feel very different

In the midst of the pandemic, no one knows what the experience of Concacaf World Cup qualifying will be like. For decades the USMNT has been tested by away days in distant locales across the far-flung region. Long trips, tropical conditions, calculated gamesmanship, and cauldron-like stadiums traditionally tip the scales towards underdogs.

“If we go to qualifying in empty stadiums, that’s going to change the dynamic considerably, some for the positive and some for the worse,” Berhalter said. “You think about us traditionally going down to Central America and playing in very hostile environments and that’s completely taken away, that could give us an advantage. What players get easily motivated, what players don’t need external motivation to perform? These are all things to consider.”

A useful byproduct of MLS’s unusual tournament taking place at odd kickoff times in the hot, humid Florida summer is that it offers Berhalter a laboratory of sorts for tracking how players handle such Concacaf-like challenges. He’s also taking notes on how club coaches use the expanded substitutions rules, particularly in light of busy schedules and varying fitness levels. These situations are likely to crop up for the USMNT at some point in the coming months.

The recruitment of dual nationals continues

Berhalter discussed the case of Akinola in some detail, giving reporters a glimpse of his conversations with the young Toronto FC striker, the co-leading scorer at MLS is Back with five goals. The coach affirmed that Akinola, who has spent the entirety of his international career with the US youth national teams thus far, is considered a valued part of the program.

Akinola is also eligible to represent Canada or Nigeria, so he has options if he someday feels compelled to reconsider his allegiance. Berhalter compared him to Sergino Dest in this regard, and this topic figures to remain a significant one for the United States with other dual nationals in the mix as well.

Get ready to hear more about Owen Otasowie, for example. Berhalter noted that USMNT general manager Brian McBride is in touch with Wolverhampton Wanderers to “see what his future is” about the promising 19-year-old, a rangy, commanding center back/central midfielder in the Patrick Vieira mold. He’s eligible to represent England, Nigeria, or the United States and appears to be valued by Wolves, one of the Premier League’s fast-rising clubs.

It’s one snapshot of the holistic tracking and data-gathering Berhalter aspires to maintain for the entire pool, “to have a very good hold of our players’ situations in their clubs, in Europe and in MLS.”

We know by now that the USMNT boss is very much a tactics guy. He’s been meticulous and detailed about this aspect of the game both with the national team, something clear from his previous club jobs. That makes his answer to how he scouts these games interesting, if not surprising.

“What I have been able to see, in all honesty, which is interesting, is how you can really build pressure on yourself by playing to the side of the field,” Berhalter said. “You can easily get trapped on the side. It’s so clear from my vantage point, because I see the ball going from the center to wide and then having no numbers there, and the opponent just squeezing to the side and the ball staying there. So that’s been interesting to see, like, really, the awareness of what a pass to the sides can do to your group, and how to get out of it, how to make sure you have enough numbers there to support the ball, or if not, that you’re ready to get the ball out of the side really quickly, you play it there to draw the opponent over and then you have to get it out of the side.”

This is one of those little glimpses of a coach’s thinking that pundits might overlook without specific context to use it in. File it away for consideration in future USMNT matches, not to mention when watching MLS.

Speaking of wide areas, Berhalter’s thoughts on the in-form Pulisic naturally segued into talk about the left side in general. Pulisic is shining for Chelsea as a left winger capable of getting around the corner but particularly dangerous cutting inside onto his right foot to shoot or create.

Berhalter sounds keen to see how fielding a certain type of left back behind him could get the best out of Pulisic’s skill set in this regard with overlaps and combinations. Calling the left back position “an area of concern,” he joins a long and strange tradition of US coaches who’ve struggled with this spot on the field for whatever reasons.

“A left-footed left back is important. We don’t necessarily have that, a guy who has experience at the international level,” he said, revealing that he’s urged the right-footed Dest to hone his weaker-foot crossing. “There’s also solutions where we have Sergino coming inside and Christian staying wide at times for 1v1s. There’s options. You can set it up in a way that can work, but all those issues would be solved if you had a really attacking left-footed left back. Unfortunately, we don’t have that right now.”