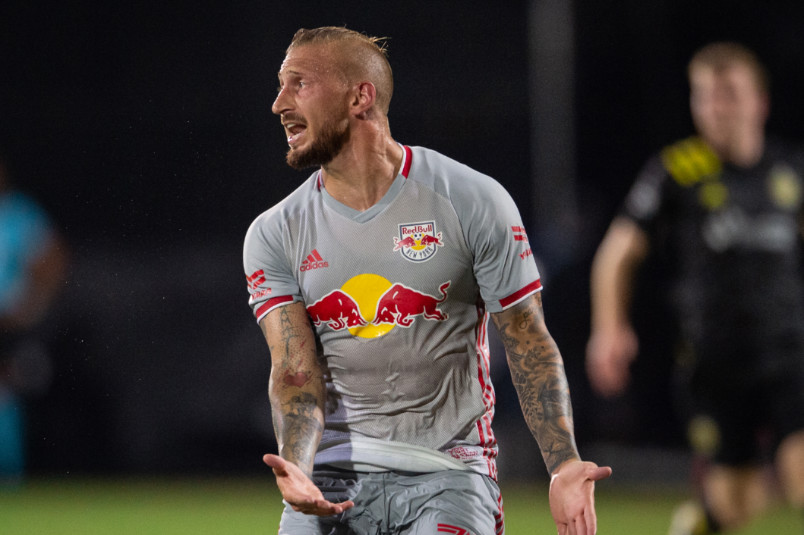 Editor’s Note: Shortly after the publication of this article, Atlanta United announced that Frank de Boer is no longer the coach of the club. “On behalf of Atlanta United, I would like to thank Frank for his leadership and commitment to the club,” club president Darren Eales said. U”Frank’s guidance, the club had a strong 2019 season in both MLS and international competition. After discussing it with Frank, the decision was reached mutually to part ways. In winning two trophies in his first season in charge, he will always be a part of the club’s history, and with great appreciation and respect we wish him all the best in the future.”

By Jason Davis – WASHINGTON, DC (Jul 24, 2020) US Soccer Players – American soccer doesn’t really do “clubs in crisis.” Maybe that’s because the English media has thoroughly made the trope its own. Or it’s because attention on clubs in the United States isn’t high enough to make declaring a state of emergency, ginned up or otherwise, worth the effort. Media around the sport in the United States lacks the tabloid edge that characterizes narratives of clubs on the other side of the Atlantic.

Still, if American soccer did do “clubs in crises”, a few teams might be getting that treatment at this exact moment. It’s a simple line to draw between the teams advancing at MLS is Back and those going home.

Each one will have to decide how much this tournament matters. Particularly in light of the possibility that MLS is unable to complete a regular season and hold an MLS Cup tournament due to continued complications created by the COVID-19 pandemic. If MLS Is Back is the only trophy on offer in 2020, should general managers and coaches face scrutiny for not getting beyond the group stage?

Fans have nothing else to go on. What happened in Orlando might be it. With that in mind, it’s understandable if they’re a little cranky.

The Red Bulls entered 2020 after a somewhat disappointing 2019 campaign. Though New York extended its playoff qualification streak to 10 years, a 6th-place finish and a first-round exit at the hands of the Philadelphia Union didn’t meet the standard they set in the last few years.

Under Jesse Marsch, the Red Bulls established the high press style of play in use across the Red Bull family of clubs and rode it to a Supporters’ Shield. Under Chris Armas, who as Marsch’s replacement finished the job of securing that trophy, they regressed just far enough to prompt leadership to make some difficult decisions. Those now look poor in light of the MLS Is Back failure.

If we’re working to be fair to Armas and the Red Bulls, it’s worth pointing out that in a typical season following the loss of leaders like Bradley Wright-Phillips and Luis Robles, the club would get a few months of low-stakes regular-season matches to work out new dynamics. In fairness, everyone at MLS Is Back is operating in the same conditions. That means the Red Bulls don’t get a pass.

They decided not to properly replace Kemar Lawrence. They poted to stick with an unproven group of forwards. That choice looks bad in light of the single goal the club scored in Orlando.

Making things worse if we’re sticking to the crisis storyline, this is a team that promotes from within. Armas was on Marsch’s staff. So was sporting director Denis Hamlett. That continuity carries with it a cost when things go badly. It’s not just making the decision on a coach as it is pushing against a system. Remember, this is the Red Bulls we’re talking about. Like their friends across the river in the Bronx, they’re an MLS club that’s part of a larger multinational project. With all that in place, if MLS is Back matters, the natural response is to focus on what needs to change.

There’s a fine line between maintaining accountability alongside responding to the will of the fan base and rashness. It’s one every team in the league is attempting to divine in the current MLS atmosphere.

Atlanta’s expectations going into MLS is Back were higher than New York’s. Even without Josef Martinez, United were favorites to win its group and challenge for the trophy with a deep knockout run. Instead, the Five Stripes are awaiting their extraction from the bubble.

De Boer cooled his seat with a 2nd-place finish in the Eastern Conference and a conference final appearance last season. It would be wrong to suggest that ended all doubts.

Atlanta’s offseason of change, which saw midfielder Darlington Nagbe ask for and get a trade to Columbus, heightened tensions going into 2020. Despite the final four appearance in 2019, the jury was still out on whether the club had successfully navigated the transition from Tata Martino to De Beor.

United missed its emotional leader in Orlando. Josef Martinez is more than a goalscorer, he’s the leading edge of an aggressive attitude that Atlanta fostered from the very beginning of its existence. There was also enough evidence to call de Boer’s tactics into question. The simple way to put that is Atlanta lacked fight. Pity Martinez looked lost. Barco was ineffective, and that’s being kind. The midfield struggled to link with the forward line, placing into stark relief Nagbe’s absence.

If things stay the same in Atlanta, it’s because a short run tournament in a ridiculous situation didn’t disrupt their system enough. Atlanta is one of the elite spenders in MLS, still only a few years into their project. Maybe they can wait, even when it doesn’t make United fans any happier about their situation.

In some places in the world, these clubs would be mired in “crisis,” at least by the standards of their excitable press. In MLS, New York and Atlanta are in something else. Maybe it’s not crisis, but it’s certainly putting them to the test.