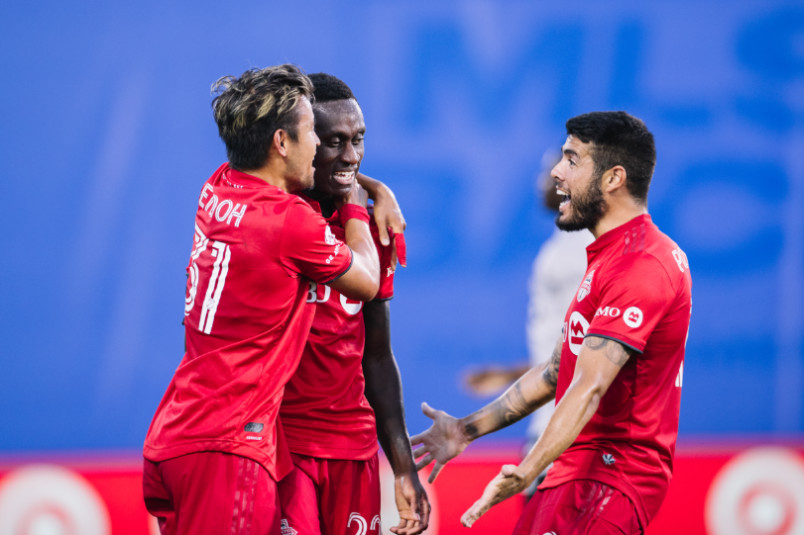 Friday's soccer news starts with another MLS is Back game featuring plenty of stoppage time. Toronto beat Montreal 4-3 with the Impact getting a late penalty. Richie Laryea scored for Toronto in the 8th minute with Montreal's Romell Quioto equalizing in the 14th. Ayo Akinola returned the Toronto lead in the 25th with Saphir Taider converting an Impact penalty in the 37th. Akinola once again responded for Toronto, also scoring in the 37th minute and adding a goal in the 83rd. Montreal pulled a goal back with Taider converting a penalty five minutes into stoppage time.

"Pretty happy to get a hat-trick," Akinola said. "But I know it's not over, we've still got one more game left. This game is in the past. I'm already thinking about the next one."

Columbus shutout the Red Bulls 2-0. Gyasi Zardes opened the scoring in the 22nd minute with Lucas Zelerayan doubling the lead in the 47th. Crew goalkeeper Ely Room didn't need a save to keep the clean sheet.

"We're real pleased, first and foremost, to, after two games, to have six points," Columbus coach Caleb Porter said. "Our goal coming into the tournament was in the first three games, to have nine points, because we knew those points would apply to the regular season and our ultimate goal of making the playoffs and winning MLS Cup. So, we're happy to be two-thirds of the way there. We still have one more game to take care of, and then from there, we'll start thinking about the rest of the tournament and the Round of 16."

In Europe, Romain Gall subbed on in the 69th minute of Stabaek's 1-1 home draw with Sarpsborg. Hugo Vetlesen put Stabaek up in the 43rd with Sarpsborg equalizing in the 46th minute. Aron Johannsson wasn't in the squad for Hammarsby's 2-1 win at Kalmar. Trailing from the 8th minute, Paulinho Guerreiro equalized for Hammarby in first-half stoppage time. Gustav Ludwigson made it 2-1 in the 74th with Kalmar playing a man down from the 87th minute.

Also in the soccer news, Real Madrid won the 2019-20 La Liga title with one game remaining in the season. "Everyone is entitled to their opinion, especially when you're at Real Madrid because that's the way it is," coach Zinedine Zidane said. "That doesn't make me any more or less happy. When there is criticism, all I can do is try and do my job. I'm passionate, and I have the good fortune to be at this great club with these players, who are ultimately the ones who have fought to achieve a beautiful thing following the confinement. It's 10 wins from 10 games. It's tremendous."

SI.com's Jonathan Wilson looks at what Real Madrid accomplished this season. The Guardian's Sid Lowe on what the title means to Zidane specifically. The Telegraph's Jamie Carragher argues that some have gone too far in criticizing Manchester City over Financial Fair Play. AP's Rob Harris explains England's plan for fans in stadiums. Bundeslia.com's review of the 2019-20 season.