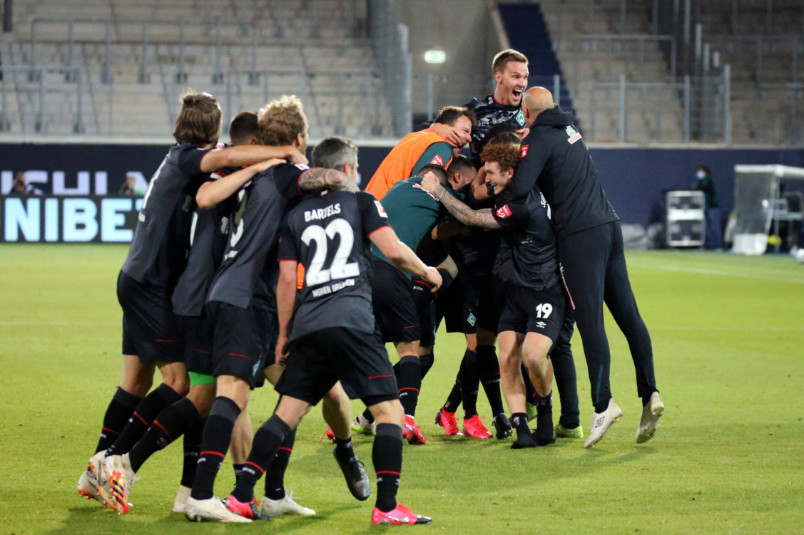 Tuesday's soccer news starts with the last piece of the 2019-20 Bundesliga season falling into place. Werder Bremen beat Heidenheim on the away goals rule after drawing 2-2 in the second-leg of their relegation playoff series. The result keeps Werder Bremen in the Bundesliga.

"I’m just happy we managed to stay up," Werder Bremen coach Florian Kohfeldt said. "We were written off so many times, but we kept coming back. I know what this means to the city, the people in Bremen. Every criticism, from a football perspective, is justified, but the boys showed their character and mentality. Respect for how they performed in the end."

This is the second consecutive season that the away goals rule decided the relegation/promotion playoff. Last season, it was 2.Bundesliga club Union Berlin beating VfB Stuttgart on away goals after drawing 2-2. That broke a six-season streak of Bundesliga clubs retaining their status in the relegation/promotion playoff. The two-leg series has been in place since the 2008-09 season.

Mix Diskerud's Helsingborg drew 2-2 at Djurgardens in the Allsvenskan. Trailing from a 9th minute goal and a 23rd minute penalty, Max Svensson pulled a goal back for Helsingborg in the 31st. Armin Gigovic equalized in the 65th. Diskerud saw yellow in first-half stoppage time. Tyler Boyd wasn't in the squad for Besiktas's 3-1 loss at Kayserispor in the Super Lig. Down a goal from the 51st minute, Atiba Hutchinson equalized for Besiktas in the 74th. Kayserispor saw the game off with goals in the 83rd and 86th minutes.

Also in the soccer, news, FC Dallas is officially out of the MLS is Back tournament due to too many positive COVID-19 tests. The league announced that tests for 10 players and a coach came back positive. "Given the impact of the number of positive tests on the club's ability to train and play competitive matches, we have made the decision to withdraw FC Dallas from the MLS is Back Tournament," MLS Commissioner Don Garber said. "The health of everyone involved in our return to play has always been our top priority, and we will continue to make decisions consistent with that priority."

Dallas was in Group B alongside Seattle, Vancouver, and San Jose. They would've opened against Vancouver on Thursday.

LAFC player and reigning MLS MVP Carlos Vela also confirmed that he will miss the tournament due to the pending birth of his child. "I would like nothing more than to be with my teammates in Orlando," he wrote. I always want to give everything I have to my Club, our fans and supporters and the city of L.A. However, it is in the best interest of the health of my family to stay home and be with my wife during what is a risky pregnancy. I will miss being with my teammates and coaches, but I will be cheering and supporting LAFC from a distance. I can't wait to be back on the field, playing for all of you and accomplishing great things with our Club. Vamos LAFC!"

The LA Times' Kevin Baxter asks the obvious question about playing pro soccer during a pandemic. The Philadelphia Inquirer's Jonathan Tannenwald with ESPN's place in the MLS is Back tournament. SI.com's Brian Straus reports on the process for selecting the US cities for the 2026 World Cup.

AP's Graham Dunbar puts a number on what European club soccer might lose due to the pandemic. The Ringer's Musa Okwonga explains the bigger issue with allowing five substitutions.

All that matters 😍#werder pic.twitter.com/Nq1E7GGxAi