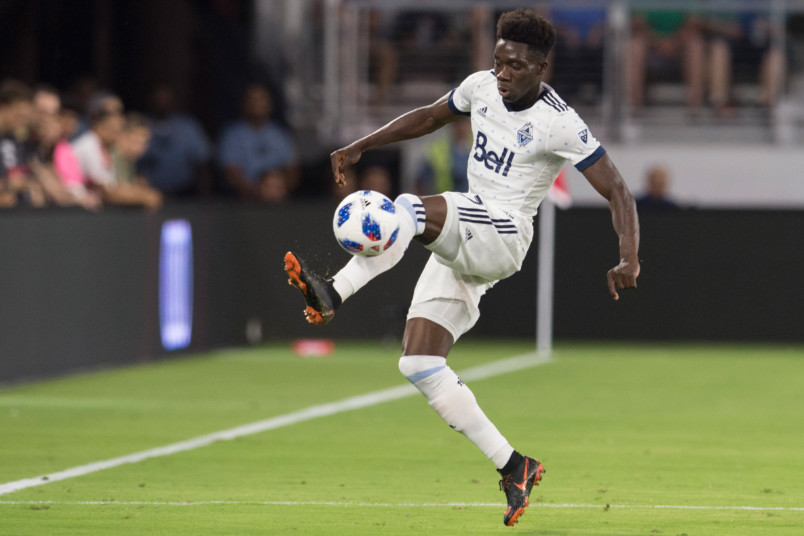 By Jason Davis – WASHINGTON, DC (Aug 21, 2020) US Soccer Players – The Vancouver Whitecaps don’t exactly stand out. If there’s a more nondescript club in Major League Soccer, it’s not obvious which one it might be. Through its almost ten years of MLS existence, the club from British Columbia has managed to serve as little more than North American soccer wallpaper. The Whitecaps are always there, playing through a season and occasionally scoring a playoff berth in the Western Conference, but no one outside of Vancouver pays much attention.

Vancouver suffers by being the least successful among its rivals, both by immediate geography and by nation. Toronto FC has an MLS Cup and two other final appearances, firmly entrenched as the leading Canadian club. Both of the Whitecaps’ Cascadia rivals, Seattle and Portland, have MLS Cup titles. Seattle is an elite MLS franchise by almost every metric: on-field success, attendance, and name recognition. The Timbers have the most celebrated fan base in MLS. Vancouver pales in comparison.

The Whitecaps do have one claim to fame that Toronto FC, the Sounders, and the Timbers do not. Vancouver played a significant role in the development of the greatest export in league history, Alphonso Davies. Though he’s still just 19 years old, the former Whitecaps academy player is quickly earning praise as a breakout performer for German giant Bayern Munich.

Since his move to Germany last year Davis has established himself a two-way threat who combines incredible athleticism with an excellent understanding of when to push into the attack and when to defend. Davies is still a work-in-progress for Bayern, but his ability to recover via his world-class speed allows him to make mistakes but not suffer for them.

Davies is unique, a unicorn in MLS player development. How much credit the Whitecaps can claim for his ascendance is a matter for debate. Still, there’s no arguing the club had a significant role in making him the player he is today. His move to Germany certainly paid off big in financial terms, with a base fee of $14m and additional add-ons that could push the total to $22m.

The Davies transfer will fund the Whitecaps on and off the field for years to come. Should Davis and Bayern Munich finish their march to the European championship on Sunday against PSG, the Ghaniana-born Liberian-Canadian made in Edmonton and Vancouver will be the first former MLS player to lift club soccer’s biggest prize.

That will be good for the Whitecaps. It will only improve the club’s academy’s perception, which established itself as a model in Canada even before making the jump to MLS back in 2011. Time will tell if the club can produce another player even close to Davies in talent and potential, but the connections already made in Europe will serve it well in the future.

Fans in Vancouver might prefer there be a little more to cheer about than the exploits of a player who suited up for them 65 times in three seasons. Pride only goes so far, especially when standard-issue mediocrity is draped in a layer of scandal and organizational incompetence. Davies aside, the last few years haven’t been good for the Whitecaps. Much of the pain was of their own making.

The club demoted longtime club president Bob Lenarduzzi in August of last year, a move precipitated by poor results on the field and a scandal involving inappropriate behavior by a coach in the club’s women’s soccer department. The club not only failed to acknowledge the mass of complaints from players who played in the club’s U-20 setup a decade ago, it made the situation worse via a prolonged review that effectively let the coach off the hook.

Lenarduzzi’s ouster stung because it broke a direct line of history that went back to the founding of the first version of the Vancouver Whitecaps in the old NASL. Lendarduzzi, a Vancouver native, played every season of that club’s existence and remained part of the scene in British Columbia during the long lower-division period that preceded the Whitecaps entering MLS.

The club eliminated the role of president and attempted to modernize its structure. While Lenarduzzi was the most visible member of the Whitecaps brain trust, they’d long operated with an opaque decision-making structure that left fans scratching their head as to who was in charge.

Enter Axel Schuster, part of the new wave of European soccer executives tasked with turning an MLS team into a winner. Like his fellow Europeans working in Philadelphia, Cincinnati, and San Jose, Schuster must find a way to turn Vancouver into a champion without one of the League’s bigger budgets.

It was immediately following Schuster’s arrival that Vancouver demolished its largest-ever spend for a single player when the club acquired Canadian international Lucas Cavallini from Puebla for a reported fee of $6 million. One player does not an ambitious club make, but Cavallini’s arrival at least indicates a new era is dawning in Vancouver.

Schuster is also laser-focused on bringing Vancouver’s academy up to a world-class standard. The better to deliver talent to the first team and maybe, just maybe, find another Alphonso Davies.

With 2020 already messy, the Whitecaps are among a majority of MLS just trying to figure out a direction. Last place in 2019 didn’t cost head coach Marc Dos Santos his job in part because it was his first season in charge and the club needed a complete rebuild. Dos Santos will get plenty of leash as the club reworks the roster. With so much bad publicity swirling from 2019, it’s unclear how the fan base will respond to another underwhelming campaign.

The Whitecaps made it out of the group stage at MLS is Back only to fall to Sporting Kansas City on penalty kicks in the Round of 16. They looked abysmal in a 3-0 loss in Toronto earlier this week as the regular season resumed in home markets. Cavallini skipped MLS is Back but has returned to the fold. Striker Fredy Montero also opted out of Orlando and hasn’t returned to the lineup.

The future is murky for Vancouver, same as it ever was. The only notable finish the Whitecaps seem capable of at the moment is last place. That’s with an expanded playoff field making it slightly easier to get into the postseason this year. If Vancouver finishes last, we might spare a thought for them. If they don’t, very little will have changed.

For the moment, the best thing the Whitecaps have going for them is their connection to a 19-year-old fullback who might win a Champions League final on Sunday. That’s something no other team in MLS can boast, though every one of them wishes they could. That will link the Whitecaps’ with a major event for a moment. Then, unless something changes, it will be right back to North American soccer wallpaper.