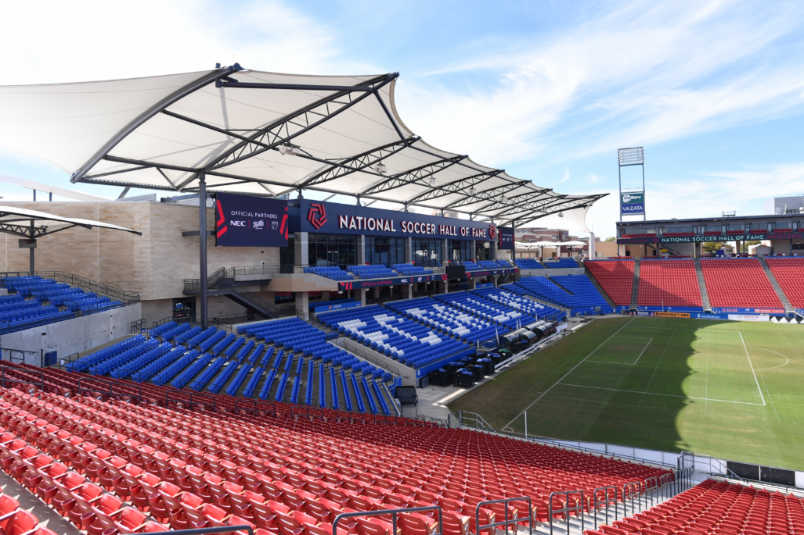 By Clemente Lisi – NEW YORK, NY (Aug 17, 2020) US Soccer Players – The MLS regular season officially returned with two teams we hadn’t seen play since March, FC Dallas and Nashville SC. Major League Soccer dropped both teams from the MLS is Back Tournament after players tested positive for the coronavirus. Missing out on the three group stage games that also counted in the league standings, they played each other twice in a span of a few days.

FC Dallas and Nashville SC got to hit the reset button on the 2020 season after a five-month break between competitive games. That comes at a time when teams normally would have played some 20 games and potentially hit their stride ahead of the MLS Cup playoffs. In a year where nothing seems normal, these two teams can now play for points rather than waiting.

Both Dallas and Nashville have some work ahead of them following all this inactivity. Instead of mid-season form, these teams are in a situation akin to preseason mode. Meanwhile, the rest of the league had MLS is Back. Regardless of how well those teams did, it’s a different experience than sitting out entirely. That means Dallas and Nashville could be in for a tough ride over the coming weeks.

Before the regular season was abruptly put on pause back in March, FC Dallas had spent much of the winter prepping to have a strong season. At the same time, Nashville was readying for its inaugural MLS year, with all the unknowns that come during an expansion season. While both teams aspire to make the postseason, expect FC Dallas and Nashville SC to struggle throughout the summer and into the fall.

We got a glimpse of how far these teams have to go over the last few days. The Dallas versus Nashville twin encounter saw sloppy midfield play and half-chances in the final third, traits that reveal just how off the pace these teams are at the moment. There were, however, some positive signs as well. Most notably, Nashville’s 1-0 win against FC Dallas on August 12 at Toyota Stadium in Frisco, the first in its history. That was thanks to the offensive skill of David Accam in the game’s waning minutes. Five days later, the best the sides could muster was a scoreless draw following a three and a half-hour delay due to a storm.

First up, a look at FC Dallas. Quarantine was apparently a time for coach Luchi Gonzalez to switch formations, going with a 3-5-2 in the MLS restart instead of his typical 4-2-3-1. To bolster the backline, he brought in center back Bressan and used Reggie Cannon and Ryan Hollingshead on the flanks. In the second game, Gonzalez changed things up, switching back to a 4-2-3-1 and inserting defender Matt Hedges for Hollingshead.

In midfield, Gonzalez will now have a new option following the arrival this past weekend of Andres Ricaurte from Colombian club Deportivo Independiente Medellin. Ricuarte will pair up nicely with Bryan Acosta in the middle of the park slightly behind Franco Jara. That should add some pressing and offensive flair to what has been an otherwise pedestrian performance in the team’s first two games back.

“He’s a creative player,” Luchi told FCD’s official website. “I think his strength is the last pass, assisting and finding others in space to score. He can do that in different positions – centrally, wide, underneath [the strikers] and even in high positions – so I think he’s going to help out depth in the 10 [position], 7 and 11. He’s going to allow us to do some creative things.”

In attack, Gonzalez is still searching for the right offensive combination that will bring his side goals. In the first game, strikers Michael Barrios and Franco Jara failed to deliver. As a result, FC Dallas featured the trio of Paxton Pomykal, Zdenek Ondrasek, and Michael Barrios on Sunday night in the hope they could create more on the wings. It ultimately didn’t work and the team produced zero goals over two matches.

Nashville SC, meanwhile, got the chance to bask in the glory of winning their first match in history after back-to-back defeats to open the season. In all, four points over two games is a positive development for them.

“It is one game, but please forgive us for maybe enjoying it more than we would normally. It’s our first win, away from home, we’ve had the disappointment with what went on [with the tournament], a lot of the players being in isolation forever,” assistant coach Steve Guppy told reporters after the team’s 1-0 win.

Guppy was filling in for head coach Gary Smith, who didn’t travel with the team for that game after an inconclusive COVID-19 test later confirmed to be negative.

“When you put all these things and look at it all together and look at tonight, away from home, in the heat, having to fly in on the day, all these things players are not used to — first game in five months — to hang in there and to get a win in the manner that we did, hats off to the players,” he added.

Nashville SC has also brought in some reinforcements, recently signing New York Red Bulls midfielder Alex Muyl who did not dress on Sunday. A team like Nashville will need to first ensure that it doesn’t give up lots of goals and is able to stay competitive against tougher opposition. That means having confidence in a starting goalkeeper like Joe Willis. In the first game against FC Dallas, Willis came up big with five saves. He followed that up with just one save to record his second consecutive shutout.

In midfield, Muyl joins veterans Dax McCarty, also formerly of RBNY, and Panamanian international Anibal Godoy. The duo, who play wide, are an integral part of Smith’s 4-4-2 formation. Offensively, Nashville, barring any reinforcements, will be going with Accam and strikers Dominique Badji and Randall Leal. Rookie Alistair Johnston got his first start Sunday, while Accam came off the bench.

It’s the 28-year-old Accam, a journeyman on his fourth MLS club in five seasons, who brings a wealth of talent and experience on the wings and in midfield. Injuries have stymied his success over the past few years. Accam will need to stay healthy if he and Nashville hope to have a debut season to remember.

Photo courtesy of US Soccer Communications