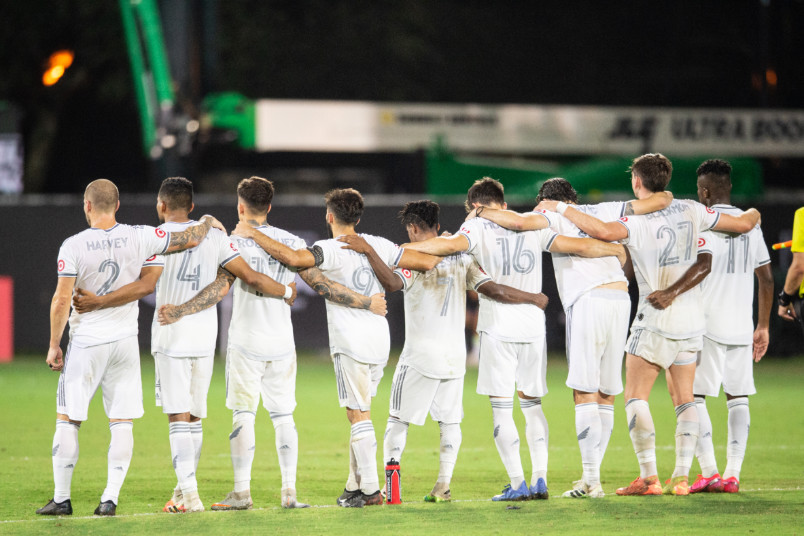 By Luis Bueno – RIVERSIDE, CA (Aug 19, 2020) US Soccer Players – In a normal MLS season, teams get one chance to make a first impression on how things will go for them that year. First impressions can energize the fan base and make other teams around the league take notice. They can also toss up red flag after red flag of things that will certainly hamper the team the rest of the season.

This, of course, is not a normal MLS season. The COVID-19 pandemic forced the league to shut down after two matches once the season began, a brief amount of time but enough to form those first impressions. Four months later, teams resumed play but did not exactly pick up where they left off. Teams participated in the MLS is Back tournament and had the opportunity to make another first impression.

With the culmination of the tournament, the league resumed play. Now, teams are trying and either continue on those earlier impressions or change them.

For the LA Galaxy and LAFC, those first and second impressions left one side of the LA derby underwhelmed with the other half anxious to continue playing with flair. It is fitting that the two sides will face off against one another to kick off this third stage of the 2020 MLS season. That will likely serve to display the widening chasm between the two sides. The LA Galaxy heads toward insignificance while LAFC prepares to contend for the MLS Cup title once more.

Season outlook: What will hold the Galaxy back more than anything will be its wretched defense. In the first two games of the year, the Galaxy gave up two combined goals, not great but not terrible. The defense hit the ground running in its ineptitude in the MLS is Back tournament. The Galaxy yielded two goals to Portland, then fell apart against LAFC in a 6-2 loss. A 1-1 draw to Houston salvaged the tournament but did little to quell the fears about this defense.

The defense will surely struggle, especially considering the rivals the club will face. It’s LAFC (twice), San Jose (twice), Seattle, and Portland. There’s not a weak attack among them. Unless the schedule changes to include some of the weaker Western Conference teams, poor defending will keep the Galaxy from competing for a postseason spot.

Season outlook: LAFC’s first two games of the regular season left some mixed reviews. The team’s 3-3 draw against Philadelphia was a fantastic match. A home draw and a pedestrian 1-0 win over Inter Miami did not make for a scintillating start. MLS is Back helped LAFC’s image improve. The club scored 15 goals in its first four games before losing to Orlando City in penalty kicks after a 1-1 draw.

While the ending was not what LAFC supporters wanted to see, the club’s play was impressive throughout the tournament, particularly in the 4-1 win over Seattle. LAFC was the class of the tournament through the Round of 16. That the team took off four-plus months and was able to play that way was impressive. There’s no reason to think that will change.

Season outlook: Javier “Chicharito” Hernandez did score in the MLS is Back tournament. Since he only played one game due to injury, it was a small sampling size. Chicharito was never a like-for-like replacement for Zlatan Ibrahimovic, who scored goals seemingly every match for the Galaxy. The expectation isn’t for Hernandez to score 30 goals a season but to be the key part of a dangerous attack.

Hernandez needs more weapons around him, particularly a playmaking midfielder who can create space and connect passes. He does not quite have that with the Galaxy, and thus he has not been able to make much of an impact. Against Portland in the MLS is Back tournament, he did have opportunities to make that impact – a penalty kick, an open look in front of goal – and was unable to do so. He scored one goal but easily could have had a hat trick in that match. Worse, the injury that kept him out the last two tournament matches will likely sideline him for several of the Galaxy’s upcoming matches. That puts him even further behind for when he does step onto the field.

Season outlook: Carlos Vela had the best individual season in MLS history last year, which helped LAFC be the dominant club it was in 2019. Not having him for the tournament seemed like a blow, and perhaps in the end it was a bit of one. Still, the club did not look worse for the wear without him. In fact, it forced the players to look to one another even more during tough times. They had to try and think in a different way than they normally do since they did not have their star player around.

In Vela’s absence, Rossi took over as the scoring star and for the most part was able to handle the load. He missed a great chance against Orlando that would have put LAFC up 2-0 late in the match, but he filled the nets throughout the tournament and helped put LAFC in that position. Others like Brian Rodriguez and Eduard Atuesta shined as well. The big revelation was Bradley Wright-Phillips’s play and contributions. Now that Vela is back, the team should look as unstoppable as it did last season.