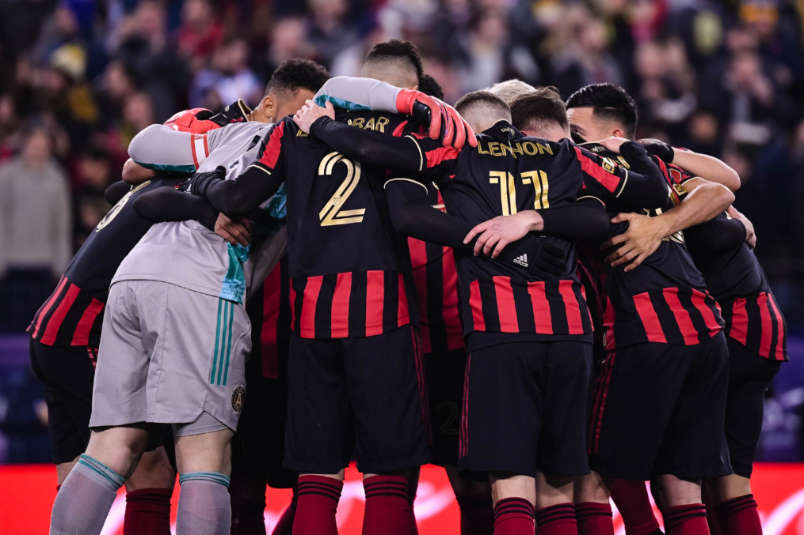 By J Hutcherson (Aug 18, 2020) US Soccer Players – It’s easy enough to plug in any team you want as potentially able to put together a run over the rest of this bizarre MLS season. Major League Soccer is back all over again, caught in a restart with teams moving players and trying to change their immediate futures. It’s a version of business as usual, but not what anybody expected. There’s no training for having to restart a season more than once after months without games.

That’s MLS right now, trying to figure out if we learned anything from the MLS is Back tournament. If we did, the quickest and broadest takeaway is that the clear favorites back in January no longer are. All things considered, that may or may not have any value. Then again, this is MLS, where any team can put together a run at an opportune time.

So, where does this leave us as MLS goes regional over the next few weeks? It’s easy enough to build up one region as tougher than others, but it’s the same basic scenario. Can any team push through playing their nearest and dearest rivals and create enough of a points gap?

Whether or not that’s even possible in this version of MLS is also worth asking. A game’s worth of points separate 3rd from 10th-place in the Eastern Conference. Those same three points are the difference between 4th from 9th in the West. It’s another not that unusual scenario for this league, trying to agree on a competitive divide between success and failure when the table isn’t cooperating.

It’s a new version of the old playoff problem, trying to decide if losing a wildcard game is success when not qualifying obviously isn’t. This season, teams are going to need to make those considerations up and down the table. Then again, if ever there was going to be a write-off season for the league’s elite, we may already be watching it.

Considering the range of issues produced by the pandemic, pushing ahead with a sports schedule may mean different things to the teams involved. The season will remain in flux until the league crowns its next champion. The asterisk next to 2020 might as well be in bold. This is not normal. It’s not a new normal. Ultimately, it’s not indicative of what 2020 would’ve looked like minus the interference of that global pandemic.

Amid all of this, the games restart with clubs staring down a difficult schedule over the next few weeks. For any of them to emerge means playing situational soccer. That’s not just a reliance on strength like we saw from LAFC before their MLS is Back campaign stalled. LAFC is a better team now with even more offense, but that still requires occasionally playing to the opponent. There’s no doubt Seattle learned from MLS is Back and won’t play themselves into a position to lose 4-1.

Atlanta United regroups around an interim coach. They’re looking to show that the points they dropped in Orlando aren’t critical. Easy enough when that lackluster performance only has them three points out of 2nd-place. Since they’re only playing Nashville, Inter Miami, and Orlando, they’ve got the best opportunity to reset the Eastern Conference table.

Toronto is that 2nd-place team, stuck in Canada due to travel restrictions. That means games against Vancouver and Montreal in a scenario that has to tilt towards them but is still tricky. The games count in the revamped Canadian championship as well, where the Impact has a history of disruption.

Orlando and Philadelphia may have shown that tournament teams exist in MLS. Good news for future Leagues Cups, but it might not mean much now. Instead, Orlando needs to make sure they really are playing better soccer than Atlanta while Philadelphia’s game goes up against New England, the Red Bulls, and DC United. Out of that group, the Revolution probably deserves the nod.

Dallas took one point against Nashville when whatever passes for home field advantage suggested more. Now they rejoin the rest of the league with games against Sporting KC, Minnesota United, and Real Salt Lake. There’s a case for any of those clubs to emerge as legit. It’s also easy enough to see them canceling each other out.

Columbus reenters league play in 1st-place in the East, playing Chicago, Cincinnati, and NYCFC. It’s easy enough to cut that group in half between Columbus and NYCFC with the other two looking to get what they can. Chicago’s rebuild may have suffered the most from the months of inaction and the oddity of MLS is Back. What they were doing focuses almost exclusively on rebuilding their fan base at Soldier Field. That’s not happening any time soon, changing the scope of their operation. They don’t match well against Columbus or NYCFC, creating a scenario where a spread in points sees them fighting for one of the final playoff spots.

It’s a new version of that old question revisted. Is getting into the playoffs enough in this league, this season? Right now, maybe. It depends on what the level of competition looks like as clubs try to show that they can take advantage of yet another restart. It’s not fair for clubs, players, or coaches, but that’s almost beside the point as Major League Soccer pushes forward.