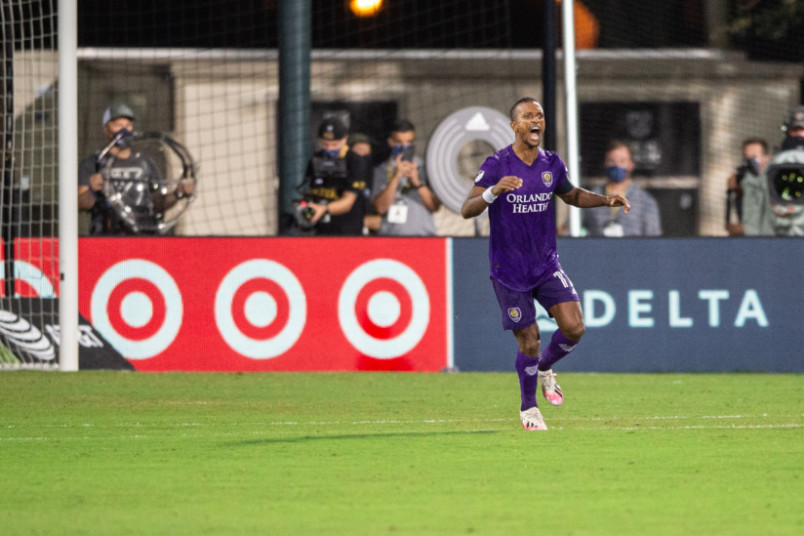 By Luis Bueno – RIVERSIDE, CA (Aug 5, 2020) US Soccer Players – LAFC had the stage set at the MLS Is Back tournament. Earlier scares were just that, games that startled but ultimately did not harm the club. Four games in and LAFC had established itself as the class of the tournament and the team to beat. Game five, though, did not go according to plan.

Midway through an admittedly bizarre year three, LAFC should might ask why they’re not further ahead. The part out of the club’s control created the MLS is Back scenario. The pandemic also denied LAFC its best attacking option. Still, there was the feeling that Bob Bradley’s club was playing agains those issues. It was if one of the best teams in the tournament was also the one playing like they had something to prove.

That took full form in their second-half blowout of local rivals the LA Galaxy. Dominating the game through Diego Rossi’s brilliance, LAFC showed that they could score enough goals to set aside concerns about their sometimes patchy defense. It’s worth the reminder that LAFC drew 3-3 against Houston before beating the Galaxy and 2-2 with Portland after that game. Again, offense wasn’t the problem.

In the round of 16, LAFC was back to its business knocking out Seattle 4-1. Again, it was Rossi providing half of the goals in another display of what LAFC seemed to be about at this tournament. That ended so quickly against Orlando in the quarterfinals that it might raise cause for concern beyond MLS is Back. If nothing else, it was a wake up call for the totality of LAFC’s game. Pressing and running up the score only works when it works. Exiting on penalties after drawing 1-1 with Orlando ended LAFC’s tournament and asked a basic question that isn’t new for this club.

For all of its impressive qualities, LAFC does not yet know how to win when it counts. How much this tournament really counts is a fair question, but every team playing in the tournament was gunning for victory. LAFC had victory and a spot in the semifinals within sight. A late Orlando goal combined with a poorly-taken spot kick in the shootout sealed the club’s fate.

In its two seasons of existence, LAFC is 1-2 in playoff games. Showing the kind of quality LAFC has put together in the regular season, all three of those were at Banc of California Stadium. The club didn’t advance to MLS Cup in its inaugural 2018 campaign. A year later, LAFC ran the regular-season table from the start.

Perhaps expecting LAFC to have capped that with a final appearance is a bit unfair. LAFC’s path might be the more appropriate one. Regular-season successes followed by playoff failures that will only help the club build toward a stronger future. Given other recent expansion teams doing nothing else but struggle out of the gate, LAFC is in a much better position than most other new clubs.

Atlanta United set a ridiculously high bar by winning MLS Cup in its second year of existence. LAFC was seemingly on its way to meeting that bar a year ago before stumbling against Seattle in the Western Conference final. Unmet expectations for some, but part of a journey for those taking the long view.

Where MLS is Back fits into this is a good question. If MLS can get the regular season restarted, it may not count for much. Credit the league for keeping the bubble mostly intact, but it’s always going to be MLS Cup that counts. Well, assuming the league gets to the point where they can play it.

If they get more games, LAFC can quickly answer some of the MLS is Back issues. That Orlando quarterfinal tested the team’s depth and it did not stand up well. Already the club was without reigning league MVP Vela and fellow striker Adama Diomande. Bradley Wright-Phillips, a bit of a sensation for the club during this tournament, is not yet a 90-minute player. His presence at the end of the game would have helped. Andy Najar, another deft pick-up, is not match-fit either. When Eduard Atuesta went down due to a friendly-fire kick by teammate Dejan Jackovic, it proved to be one too many losses.

A bigger problem than depth is the inability to finish off a win. LAFC led 1-0 after Wright-Phillips scored on the hour mark. With the minutes slowly ticking away, LAFC needed someone to either kill the game off score and put the game away. Diego Rossi had an opportunity on a late breakaway but was turned away by Orlando goalkeeper Pedro Gallese. A goal there would have given LAFC an insurmountable lead. Instead, Orlando equalized in stoppage time and won it by converting all of its penalty kicks. LAFC had a ghastly effort by Jordan Harvey hit the crossbar for the lone miss by either side.

Closing out a tight game in the regular season is one thing. Doing it when the season, or in this case the tournament, is on the line is something else. The opponent is fighting desperately to stay alive, searching for a goal, likely playing with extra intensity and passion.

Still, better that it’s MLS is Back than the MLS playoffs. This loss certainly gave the club a taste of what the postseason will be like for this group of players, a new look LAFC with the same offensive push. It’s worth the reminder that this team responded against Leon in the Concacaf Champions League earlier this year, needing and getting a 3-0 win at home against the Liga MX side to advance to the semifinals.

Most of all, though, this stressed the importance of Vela. LAFC is a different team with him. The team looked like a true contender even without him around to score goals and create chances for others. That’s certainly something, putting LAFC in an elite category even as they made an early exit at MLS is Back.