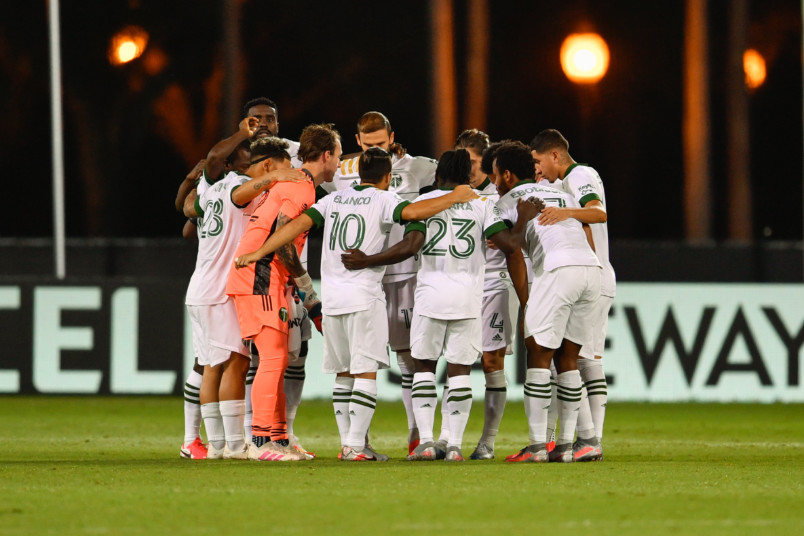 By Clemente Lisi – NEW YORK, NY (Aug 10, 2020) US Soccer Players – The MLS is Back Tournament is ready to crown a winner. Despite the pandemic and the safety protocols that came with it, the league was able to pull off the tournament in Orlando. What seemed like an impossibility just a few months back, the competition allowed for MLS to return, albeit in a different form, for much of the summer. It’s easy enough to see it as a success.

The MLS is Back Tournament finalists, the Portland Timbers and “home side” Orlando City, represent two teams that persevered most over the last few weeks. The Florida heat and humidity and the often-unusual kickoff times that came with it wasn’t easy. Add in the months of inactivity and choppy preparation most players endured heading into the bubble.

Early on, there were some issues. FC Dallas and Nashville SC had to sit out the tournament after players on both teams tested positive for the coronavirus. The situation didn’t look good, but MLS endured just as virus cases began to surge in places like Florida. The league altered the groups and the schedule. Games went on. Players got better. In the end, the league put on a very good show.

At the same time, pre-tournament favorites like defending league champions Seattle Sounders FC and Los Angeles FC exited early. The tournament saw teams such as the Philadelphia Union and Orlando City SC shine. With the MLS is Back final set for Tuesday, here are five things we learned from this summer’s tournament.

Investing in youth players and a core of veteran players have helped the Philadelphia Union reach new heights. It’s true that the Union fell to the Portland Timbers 2-1 in the semis, but coach Jim Curtin’s team proved formidable.

Rising stars like defender Mark McKenzie and midfielder Brenden Aaronson and vets such as goalkeeper Andre Blake ,who led all goalkeepers with 27 saves, and midfielder Alejandro Bedoya made the Union a tough opponent. While true that a player like Aaronson has drawn interest from European clubs, the Union was smart to keep him and others on the roster one more year in an effort to win some silverware.

Foreign stars shine when it matters most

Who’s the MLS is Back Tournament MVP? Even before the final is played, I’d have to say Portuguese veteran Nani. The 33-year-old Orlando City midfielder has been scoring goals and creating chances for the de facto hosts over the past few weeks. He’s been both consistent and clutch with three goals in six games, giving Orlando a real shot at winning this thing.

LAFC striker Diego Rossi was the other big star of the tournament. His seven goals from 22 shots powered LAFC to the quarterfinals, only to lose to eventual finalist Orlando on penalties. Rossi, however, has shown once again that he’s the real deal and should continue to progress as a player over the coming months and years.

This all means that a LAFC with a full, healthy roster could be a lot more competitive. It will be interesting to see an attack with Rossi, Vela, and Hernandez. As teams of this caliber have shown before, regular games are easy to win, but elimination ones are tougher. This is where LAFC needs to improve most if they really want to make a serious title run this season.

The bracket was very exciting, giving us a prelude of what the MLS Cup Playoffs could bring come the Fall. The close games and last-gasp goals didn’t tell the full story of the MLS is Back Tournament. One big deciding factor was the shootout. The knockout stage bracket featured 14 games, four of which went to penalties.

Sporting Kansas City had the better of the Vancouver Whitecaps in the round of 16, winning 3-1 in the shootout after the game ended scoreless. It should be no surprise. Sporting KC is 5-1 all-time when it comes to spot kicks. Orlando is 1-0 on penalties in the MLS is Back Tournament, while the Timbers have yet to contest a shootout in this competition. The finals could very well end with penalties should the sides, as many expect, play a close contest.

The bubble worked… now what?

It’s true that the bubble held up, but what now? The MLS regular season will return on Wednesday with teams playing a schedule in their home stadiums. FC Dallas and Nashville SC have three games in hand, so they’ll kick off things against each other with a pair of matches in Texas on Wednesday and Saturday. The rest of the league joins in from August 21-23. Some games will also feature a limited number of fans depending on the city and state guidelines. The playoffs expand to 18 teams with the MLS Cup Final scheduled for December 12.

“Since suspending play in March, we have been working on plans to play as much of our season as possible, beginning with the tournament in Florida and resuming in our local markets following the competition,” said MLS Commissioner Don Garber. “We remain focused on the health and safety of our players, coaches and staff and look forward to continuing our season in our home markets.”