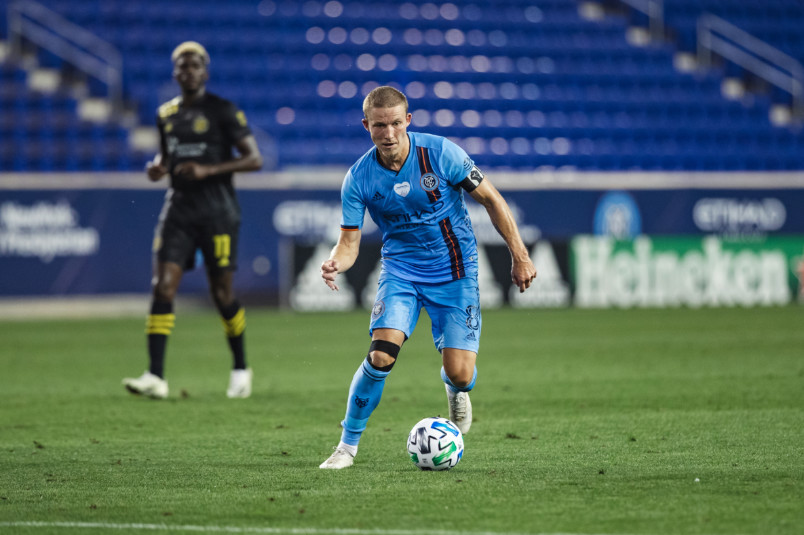 By Charles Boehm – WASHINGTON, DC (Aug 27, 2020) US Soccer Players – Many of those who resent extreme wealth’s outsized influence on soccer enjoyed watching petro-dollar-infused clubs Paris Saint-Germain and Manchester City fail in their quests to hoist the UEFA Champions League trophy this month. Here on the North American scene, they may also savor the discomfort currently inflicted on NYCFC, Manchester City’s sibling club in Major League Soccer.

The New York Cityzens are 2-5 in league play this season as they labor to find their form under first-year head coach Ronny Deila. What might be more galling to the blue half of Gotham is their forced residency at Red Bull Arena, home of their RBNY rivals, for the foreseeable future. As it turns out, all the money in the world can’t buy you a soccer stadium of your own in New York City’s urban core.

COVID-19 is the main culprit here, if only part of the wider story. Beyond disrupting the MLS season in multiple ways, the pandemic means the New York Yankees can’t share Yankee Stadium with their soccer housemates due to MLB safety protocols. What NYCFC isn’t saying out loud is that it’s unlikely the baseball team would want to deal with the additional hassle of ground-sharing in a compressed, rescheduled season anyway.

So after flirting with the idea of holding their spectator-less home matches at their small training facility in suburban Orange, New York, City and MLS were left with no choice but to move in with the adversaries they have long mocked as the “New Jersey Red Bulls.” There’s no inherent shame in sharing a venue, particularly a gorgeous one like Red Bull Arena. Except when you’ve put repudiation of the soil it sits on at the heart of your identity from birth.

In the process NYCFC gave the lie, at least on some significant level, to their incessant branding as the true team of the city, connected to the culture and rhythms of the streets in a way that RBNY could never be. The sight of their supporters’ groups’ tifo and signage laid across the “South Ward” sections usually prowled by their hated counterparts like ESC and the Viking Army adds to the jarring sensation. All this surely doesn’t help MLS’s efforts to craft its appeal to fans around local identity and sense of place.

Reports suggest they’ll also soon have to share RBA with two more clubs. The venue has apparently been picked as the Stateside home of Toronto FC and the Montreal Impact when the latter phases of the restructured MLS regular season force them to take up residence south of the border due to Canadian border restrictions. In an era of empty stadiums becoming sound stages as much as arenas, Red Bull Arena will be busy.

I should note here that the coronavirus crisis has driven home to most of us the reality that sports must take a back seat in the midst of so much pain and suffering. We’re fortunate to have any soccer happening at all right now, so this discussion inevitably lives at a different level on humanity’s hierarchy of needs. That said, NYCFC’s stadium situation is an ongoing fiasco. The fact that we’ve mostly grown accustomed to it should be a bad sign for the club, not a relief.

We’re now in Year 6 of their uncomfortable tenure at a baseball diamond. This was always supposed to be a temporary situation. It was worth it for the chance to see how the Big Apple responded to an MLS team playing within the Five Boroughs. Even the least cynical among us must now look back and conclude that City Football Group’s enormous expansion fee, an MLS record at the time and a harbinger of even bigger numbers to come, was the main factor in the timing.

The fans did in fact respond positively, especially in the early years. NYCFC drew hefty crowds even with poor sightlines and an awkwardly compacted playing field. Back then, it made sense that City Football Group’s resources and connections were worth the compromise of baseball cohabitation. That equation looks different today, even if the conglomerate’s presence in MLS has been a net positive from where I stand.

It’s not that City Football Group hasn’t tried mightily to carve out some urban real estate of their own. In a parallel universe free of COVID-19, NYCFC might have already announced their plans for a 25,000-capacity ground and mixed-use development project on the site of a parking garage and elevator factory near Yankee Stadium. The virus’s awful ravaging of the city in the spring pushed that way down everyone’s list of priorities.

“There hadn’t really been a lot of specific dialogue and focus since then because it just wasn’t anyone’s top priority and it’s not really appropriate to focus on that during the times we were in,” NYCFC CEO Brad Sims told reporters last month. “Ultimately it’s going to be very driven, the process, on a going forward basis, by community leaders and local elected officials, community boards, etcetera. We’re looking forward to that process, hopefully, starting in the very near future.”

Even in a best-case scenario, the club wouldn’t move in until 2024 at the earliest. So the current awkwardness will not abate for years to come.

The embarrassment might sting more this week. NYCFC is part of the furor around Lionel Messi’s reported desire to leave FC Barcelona. One iteration of the insider reporting around that laid out a premise where the Argentine genius moves to Man City on a mega-contract that also includes a subsequent swansong in MLS with NYCFC. That’s a believable hypothetical that takes on a farcical tone at the prospect of the team still being at Yankee Stadium at that point. The icon’s farewell happening a field widely loathed across the league. He and every other player deserve better.

“Messi alone would not be able to bring a new stadium, because the bureaucracy of New York is not solved by stepovers. But maybe, just maybe, a new arena will finally arrive by the time Messi does,” wrote Andrew Marchand in the New York Post. “It could be ‘The House That Messi Built.'”

Even for “The Atomic Flea,” that might be a bigger task than winning the World Cup.