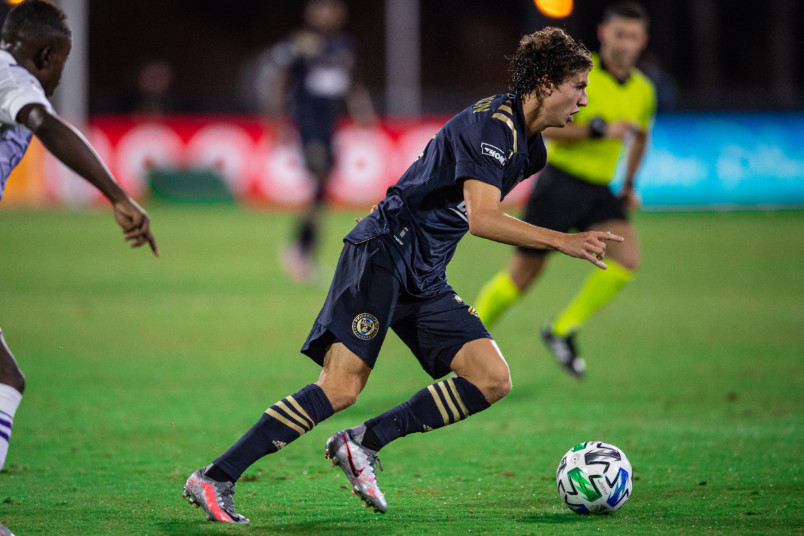 By Jason Davis – WASHINGTON, DC (Aug 7, 2020) US Soccer Players – What was once a product of necessity is now something of a hot commodity in the world of Major League Soccer. The league’s return-to-play model, the MLS Is Back tournament in Orlando, Florida, is winding down with only Tuesday’s final left on the schedule. Fifty-one games in total, played on training fields for the sole benefit of TV audiences, with a Champions League spot and a million dollars on the line.

At least one leading MLS figure would like to see the league repeat the competition, even when the COVID-19 pandemic subsides and the soccer world presumably returns to normal next year.

“Sometimes it’s okay for the US soccer game to be different from the rest of the world,” Philadelphia Union head coach Jim Curtin said ahead of his team’s semifinal clash with the Portland Timbers. Curtin didn’t elaborate on just exactly how an annual MLS Is Back-style competition would fit into the existing calendar.

It makes sense that Curtin would see the tournament as a positive, especially in a moment when winning the trophy was still possible for his up-and-coming team. MLS Is Back was good to the Union. It wasn’t just making it to the final four. The tournament also provided an opportunity in a controlled, pressurized environment for some of their young players to grow.

Brenden Aaronson was the talk of the resort thanks to his heady play in the Philadelphia midfield on the attacking end of the field. While it’s possible the South Jersey native might have made the same sort of waves in the MLS regular season, the centralized tournament format in Orlando focused the spotlight on his exploits.

That feeds directly into how the Philadelphia Union hopes to operate. They want to be a competitive MLS club that develops local talent and sells it on for money that can be re-invested in the process.

Would Curtin feel the same way about repeating MLS is Back without the winning and attention? Maybe, but it wouldn’t be a surprise if he felt differently if the Union crashed out of the tournament at the group stage. The weeks away from home that Philadelphia spent is easier to stomach when the wins are coming.

We can’t help but wonder if the vibes are slightly different in teams with richer recent records than Philadelphia’s. If you’ve got an MLS Cup or two in your trophy case, or even a Supporters’ Shield or three, MLS Is Back doesn’t have the same sort of appeal. You’d much rather be playing a regular-season and eyeing that MLS Cup-winning playoff run.

MLS commissioner Don Garber responded to Curtin’s suggestion on Fox Sports at halftime of the Union vs Timbers semifinal.

“Perhaps this is something we could recreate in the early part of the year,” Garber said. “There has been no planning for that whatsoever. Our focus is in our markets, in front of our fans when we can, getting our players home and getting back to some sense of normal once we are able to achieve a regular cadence of games.”

Though the wisdom of MLS returning to its home markets and resuming its season is open to healthy skepticism, it’s understandable that MLS hasn’t put much effort into thinking about a future for MLS Is Back. The tournament was never meant to happen. Few will shed a tear if it becomes a footnote in league history. That’s in large part because that would mean there was a return to normalcy. Garber did allow an opening for something like MLS Is Back to happen in “the early part of the year.” That doesn’t bode well for Curtin or anyone else hoping to see a repeat of the tournament. With Major League Soccer’s current calendar, that would make future MLS is Back competitions preseason affairs. Even loading up the tournament with incentives, a spurious idea from a sporting perspective, might not encourage teams to give a full effort.

Preseason exists for a reason. It prepares teams coming out of the winter offseason for a long, grueling regular season and, hopefully, an MLS Cup playoff run. An attempt to add meaning to the preseason misses the point and will likely only end with rusty teams playing poor soccer with unfit players.

The Portland Timbers have an MLS Cup trophy in their case and played for a title as Western Conference champions just two years ago. For all the club’s success, Portland has suffered through fallow periods when just making the playoffs was a challenge. Like so many MLS teams, the Timbers are looking for the formula that will make them a consistent MLS Cup threat without any of the also-ran seasons.

Bringing younger, cheaper talent into the team is key to that effort. Few teams can buy their way to the elite, especially in a league that forces teams to work under strict budget rules. In forward Jeremy Ebobisse and midfielder Eryk Williamson, the Timbers have two young players coming into their own at MLS Is Back in Orlando.

Ebobisse’s rise was in process before the tournament. In his first full season as a regular, the Duke product scored 11 goals in 34 appearances with 25 of those starts in 2019. Head coach Giovanni Savarese now trusts the 23-year old to be the man leading the line for the Timbers, even as the team added Polish forward Jaroslaw Niezgoda ahead of the season.

Savarese’s faith in Ebobisse showed. He scored the opening goal in Portland’s 2-1 win over Philadelphia in Wednesday’s semifinal. There was nothing transcendent about Ebobisse’s header in the 13th minute, but he once again displayed the type of nose for goal that is necessary to succeed in the position. The Timbers aren’t exactly one-dimensional, but getting the first goal did allow them to play to their sit-and-counter strengths.

Williamson’s story is more unconventional and his move into the starting lineup more of a surprise in Orlando. A former college player at Maryland, Williamson played in the DC United system until his local MLS team decided to trade his rights to Portland. Give the Timbers credit for bringing Williamson along despite the fact he was not in their immediate plans. The club gave the midfielder minutes with its USL affiliate, Timbers 2, and committed to developing his talent.

Now, Williamson is the key figure alongside Diego Chara in the club’s MLS is Back run to the final. While Aaronson is getting more attention and is four years younger, Williamson is proving that the traditional American “late bloomer” still has a place in the country’s top division.

MLS is Back probably won’t happen again. With a crowded calendar, there’s just no room for a tournament that might come close to this competitive level. MLS is Back served its purpose. One team will leave with a trophy. Several others will leave with a keener sense of who they are and, perhaps, with a handful of players made more mature in Orlando.